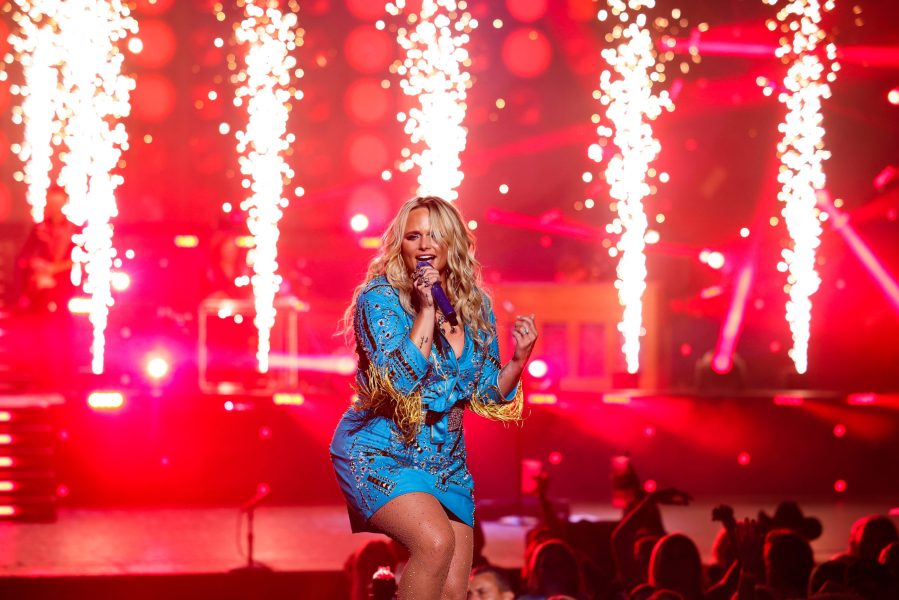 “We’ve been dreaming up this show for so long to make it something special for the fans and to celebrate all the music we’ve enjoyed together over the years,”

“We’ve been dreaming up this show for so long to make it something special for the fans and to celebrate all the music we’ve enjoyed together over the years,” reflects Lambert. “It felt amazing to finally take everything we’ve rehearsed and share it with that room full of people. I can’t wait to do it again next weekend and to make Vegas our own supersized honky tonk for months to come!”

Clad in a bright blue embroidered ensemble by The Blonds inspired by one of Elvis’s Vegas jumpsuits and topped with a glitzy Sin City-appropriate Daniel x Diamond cowboy hat, Lambert rose slowly on an upstage lift to officially kick off the eight month residency Friday evening with sassy opener “Actin’ Up,” settling in on her new home stage with the playful lyrical motto: “Got my own kind of country, kind of funky, t-t-turn it up!” From there, as she moved into an exhilarating rendition of “Fastest Girl in Town,” the pyrotechnics exploded with the energy of what was to come as the at-capacity crowd basked in the excitement of opening night.

“Lambert shined vocally as she seamlessly traversed her deep catalog.”

Backed by her longtime band featuring guitarists Ethan Ballinger and Jerry Massey, steel guitarist Spencer Cullum, keys player Daniel Mitchell, bassist Jonathan Murray, backing vocalist Gwen Sebastian and drummer Max Zemanovic, Lambert treated fans to more than 20 songs throughout her wide-ranging 90 minute set. From an especially touching performance of Lambert’s emotive ballad “Carousel,” backed only by a piano as she stood flanked by towering spotlights, to a rousing rendition of her triple-Platinum hit “Gunpowder & Lead” that wowed the audience with its grand finale as the fringed sleeves of her pink Idyllwind jacket burst into sparkling flames, the musical celebration was well worth the wait for both Lambert and her fans.

“We made it! We’re so damn glad to be playing for people tonight; we’ve been rehearsing for a really long, long time,”

“We made it! We’re so damn glad to be playing for people tonight; we’ve been rehearsing for a really long, long time,” Lambert shared midway through her set on Friday night as she introduced inclusive anthem “All Kinds of Kinds,” continuing, “This song is your friendly reminder to be who you are, always, all the time – ’cause you just might end up in Vegas on a stage with bright lights, you never know!”

“Miranda Lambert’s Las Vegas is a playground of pyro… But Lambert’s ‘Velvet Rodeo’ go-round is also blanketed in crisp musicianship.”

Saturday’s show maintained the high-energy atmosphere of opening night, from a poignant rendition of her GRAMMY Award-winning “The House That Built Me,” with the crowd taking over lead vocals for the final chorus, to an invigorating performance of her ACM Single of the Year-winning number “Mama’s Broken Heart” and a full audience singalong for the penultimate number, “Drunk (And I Don’t Wanna Go Home),” as confetti rained from the ceiling.

Tickets for shows through April 9, 2023 are on sale now at ticketmaster.com/mirandavegas, with shows scheduled to begin at 8 p.m.

“The songwriter/performer set the stage for a 22-song whirlwind trip through a career that was staunchly country, yet boldly musical and strong female positive.”

Lambert, Live Nation Las Vegas and Caesars Entertainment are donating $1 of every ticket purchased to “Miranda Lambert: Velvet Rodeo The Las Vegas Residency” at Planet Hollywood Resort & Casino to Lambert’s MuttNation Foundation, a 501c3 nonprofit that has raised over $6 million since its inception in 2009. The Foundation’s mission is to promote the adoption of rescue pets, support animal shelters across the country, advance spay & neuter and assist with the transport of animals during times of natural disaster. For more information, visit www.muttnation.com.

About Miranda Lambert
Palomino, the eighth solo album from Vanner Records/RCA Nashville superstar Miranda Lambert, arrived in April as the largest female Country album debut of 2022. Already named among the best albums of the year by TIME, Rolling Stone, Billboard, Stereogum and more, it marks the latest installment in a storied career that has spanned seven previous No. 1 solo albums, 10 No. 1 hit radio singles, more than 70 prestigious awards and countless sales certifications, earning the reigning ACM Entertainer of the Year praise from NPR as “the most riveting country star of her generation.”

Now headlining her Velvet Rodeo Las Vegas residency at Planet Hollywood Resort & Casino’s Zappos Theater, the top streaming female Country artist of 2022 was also named to the 2022 TIME100 list honoring the world’s most influential people, with Pitchfork declaring that she “manages the hat-trick of both timelessness and timely activism.” Whether challenging conventional gender notions in her recent Top 10 hit “If I Was A Cowboy” or using her voice to write and record the inclusive “Y’All Means All” anthem for the latest season of Netflix’s “Queer Eye,” the Texas native continues to expand the tent of the Country genre via her music, including current single “Strange.”

Her clothing and cowboy boot collection, Idyllwind, is a private-label brand sold at all Boot Barn stores nationwide and her home goods collection, Wanda June, is available now at Walmart.com. An avid animal lover, Lambert’s MuttNation pet product line is available exclusively at Tractor Supply Co. with proceeds benefitting her MuttNation Foundation, a 501c3 nonprofit that has raised over $6 million since its inception in 2009. The Foundation’s mission is to promote the adoption of rescue pets, support animal shelters across the country, advance spay & neuter and assist with the transport of animals during times of natural disaster.

About Planet Hollywood Resort & Casino
Planet Hollywood Resort & Casino is the centerpiece of the famed Las Vegas Strip, with 2,500 beautifully redesigned guest rooms and suites showcasing some of the best views in town, along with endless options of unparalleled shopping, distinguished dining, popular entertainment and a bustling nightlife. A bright, bold addition to the resort’s portfolio, the Ultra Hip Rooms feature contemporary elegance and luxury bedding. Known as the place to play for its roster of A-list celebrity guests, Planet Hollywood’s 231 restyled suites feature stunning views of the glittering skyline and daring décor elements such as suspended sofas, lounge-style living spaces and oversized modern artwork. The resort encompasses more than 100,000 square feet of gaming, Caesars Sportsbook at Planet Hollywood, The Scene Pool Deck, several lounges, an intimate wedding chapel, and a relaxing spa and salon. Impressive restaurants include Gordon Ramsay Burger, KOI, Strip House and more. Home to the first pop music residency in Las Vegas, Zappos Theater is one of the largest theaters on the Vegas Strip and showcases a variety of resident headliners including superstars like John Legend and Miranda Lambert. Magician Criss Angel performs an over-the-top visual spectacular of “Criss Angel MINDFREAK®” in the Criss Angel Theater. Additionally, Angel along with visionary creator Franco Dragone have teamed up to create Criss Angel AMYSTIKA, a fantastical and mysterious production which immerses the audience in a spectacle of euphoric, stunning illusions, one-of-a-kind special effects, jaw-dropping stunts and much more. The property is encircled by Miracle Mile Shops with more than 170 specialty stores and restaurants. Planet Hollywood Resort & Casino is operated by a subsidiary of Caesars Entertainment, Inc. (NASDAQ: CZR). For more information, please visit planethollywoodresort.com or the Caesars Entertainment Las Vegas media room. Find Planet Hollywood Resort & Casino on Facebook and follow on Twitter and Instagram. Must be 21 or older to gamble. Know When To Stop Before You Start.® If you or someone you know has a gambling problem, crisis counseling and referral services can be accessed by calling 1-800-522-4700. ©2021, Caesars License Company, LLC