Behind The Scenes At C&I's Western Fashion Shoot 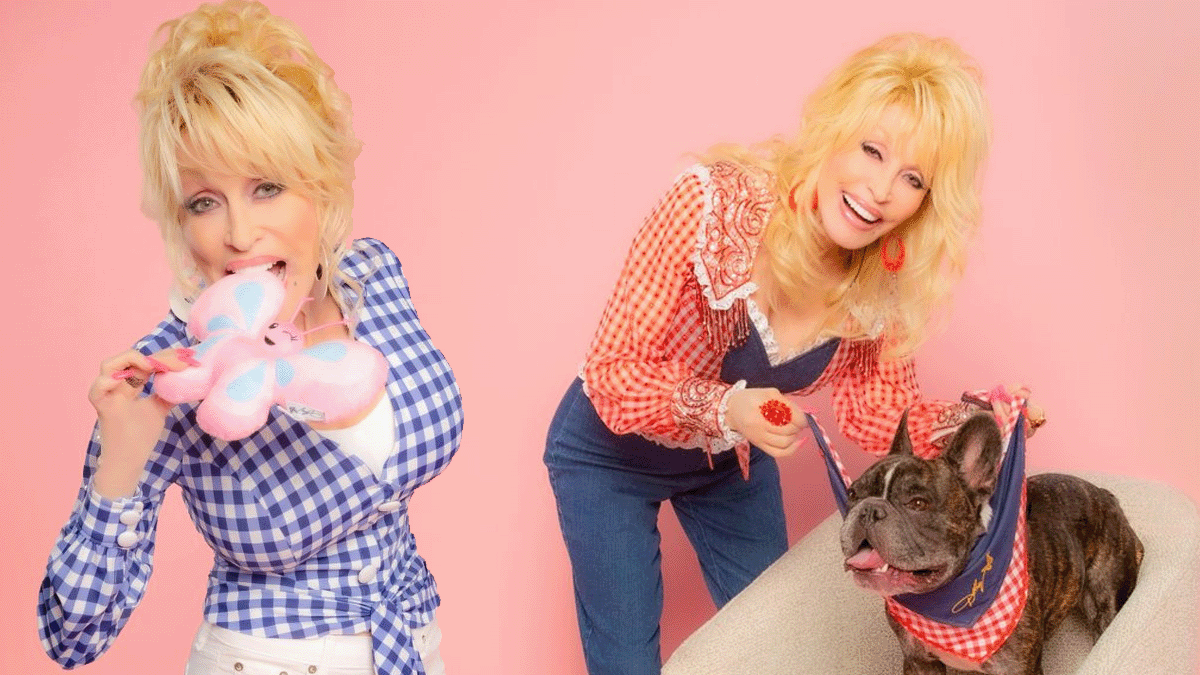 (August 31, 2022 – Nashville, TN) Global icon, Dolly Parton, has announced the launch of Doggy Parton – a line of dog apparel, accessories, toys and more, in partnership with SportPet Designs, that will feature a little “Dolly” inspiration that is sure to get tails waggin’! Doggy Parton is quite literally a “pet” project that is very near and dear to Dolly’s heart with part of the proceeds going to Willa B. Farms – a rescue that provides a loving home to displaced animals of all kinds.  For more information on Willa B. Farms or to donate please visit:  https://www.willabfarms.com/.

“’Puppy Love” was my very first record and 6 decades later, my love for pets is stronger than ever. This inspired me to start my own line of Doggy Parton apparel, accessories, toys and more with a little ‘Dolly’ flair,”

Part of the proceeds will support Willa B Farms, a rescue where animals in need find never-ending love. Don’t we all need that?’”

Initially Doggy Parton products will be available via DoggyParton.com and Amazon.com with more retailers to be announced later.

Global icon, country music legend and philanthropist Dolly Parton is excited to announce the launch of her Doggy Parton collection. As a devoted pet lover, Dolly was inspired to start her own line of Doggy Parton apparel, accessories, toys and more with a little “Dolly” flair. No one can do it quite like Dolly. This collection is playful, flashy, and sassy; truly capturing the essence of the beloved icon. Being a passionate supporter of animals, a portion of every purchase will help fund and support Willa B Farms, a rescue where animals in need find never-ending love and care.

Be sure to stay tuned for all things Doggy Parton by visiting:

About Billy The Kid:

After years without a pet, today Dolly is the Godmother to her Goddog, Billy The Kid. Billy The Kid will be the canine face of Doggy Parton appearing alongside Dolly from time to time.  Dolly’s longtime manager, Danny Nozell, lives with his superstar influencer canine. Billy accompanies Dolly to many media interviews, joins her in business meetings with Danny, and gets very excited when he sees his ‘Dolly Mama’! He loves to get dressed up for Dolly!

About Willa B. Farms:

Willa B. Farms Animal Rescue is a grassroots 501(c)(3) non-profit organization that is dedicated to improving the lives of homeless, neglected, abused and abandoned animals. Headquartered in Old Hickory, TN, Willa B. Farms rescues and rehabilitates animals, one by one, offering them a loving, caring environment where they can recover and thrive.

Dolly Parton is the most honored and revered female country singer-songwriter of all time. Achieving 25 RIAA-certified gold, platinum, and multi-platinum awards, she has had 26 songs reach #1 on the Billboard country charts, a record for a female artist. Recently, Parton reached #1 on the Billboard Christian Airplay Chart for the first time for her duet with Grammy award-winning Zach Williams of “There Was Jesus,” for which they won a Grammy that year, making that her 11th Grammy win.   She received her first Dove Award for short form video for her collaboration with for King & Country on the song “God Only Knows.” Parton is the first artist to have topped the Billboard’s Adult Contemporary, Christian AC Songs, Hot Country Songs, Christian Airplay, Country Airplay and Dance/Mix Show Airplay radio charts. Parton recently became the first country artist honored as Grammy MusiCares Person of the Year given out by NARAS. She has 47 career Top 10 country albums, a record for any artist, and 110 career-charted singles over the past 50+ years.  On May 4, the Rock & Roll Hall of Fame announced that Dolly Parton was one of its 2022 Inductees in the Performer Category honoring “artists who have created music whose originality, impact, and influence has changed the course of rock & roll.” The 37th Annual Rock & Roll Hall of Fame Induction Ceremony is scheduled to take place at Microsoft Theater in Los Angeles, California on November 5.

In 2014 the RIAA recognized her impact on recorded music with a plaque commemorating more than 100 million units sold worldwide. Her 2016 #1 album, “Pure & Simple,” which topped the Billboard Top Country Albums and Americana/Folk Albums charts and debuted at No. 1 in the U.S., Canada, U.K. and Australia, added to that massive tally. She has garnered eleven Grammy Awards and 51 nominations, including the Lifetime Achievement Award and a 2020 win with for KING & COUNTRY for their collaboration on “God Only Knows”; 10 Country Music Association Awards, including Entertainer of the Year; five Academy of Country Music Awards, also including a nod for Entertainer of the Year; four People’s Choice Awards; and three American Music Awards. In 1999, Parton was inducted as a member of the coveted Country Music Hall of Fame.

In 2020, she released the Christmas album “A Holly Dolly Christmas” which went #1 on the Billboard Country and Holiday charts, as well released the bestselling coffee table book “Songteller: My Life in Lyrics.”  In 2021, she won an Emmy Award for Outstanding Television Movie for the film “Dolly Parton’s Christmas on the Square” and this December 2022, she will be releasing on NBC an all-new original holiday movie called “Dolly Parton’s Mountain Magic Christmas” which she is starring in as well as producing.

To date, Parton has donated over 184 million books to children around the world with her Imagination Library. Her children’s book, Coat of Many Colors, was dedicated to the Library of Congress to honor the Imagination Library’s 100 millionth book donation. In March of 2022, Parton released the book Run Rose Run which she co-authored with James Patterson which sat at # 1 on the New York Times Bestseller’s List for 5 weeks, a record for this decade.  She also released an accompanying album of the same name with original songs inspired by the book which reached #1 on three charts simultaneously — Country, Americana/Folk and Bluegrass Albums.  From her “Coat of Many Colors” while working “9 to 5,” no dream is too big and no mountain too high for the country girl who turned the world into her stage.