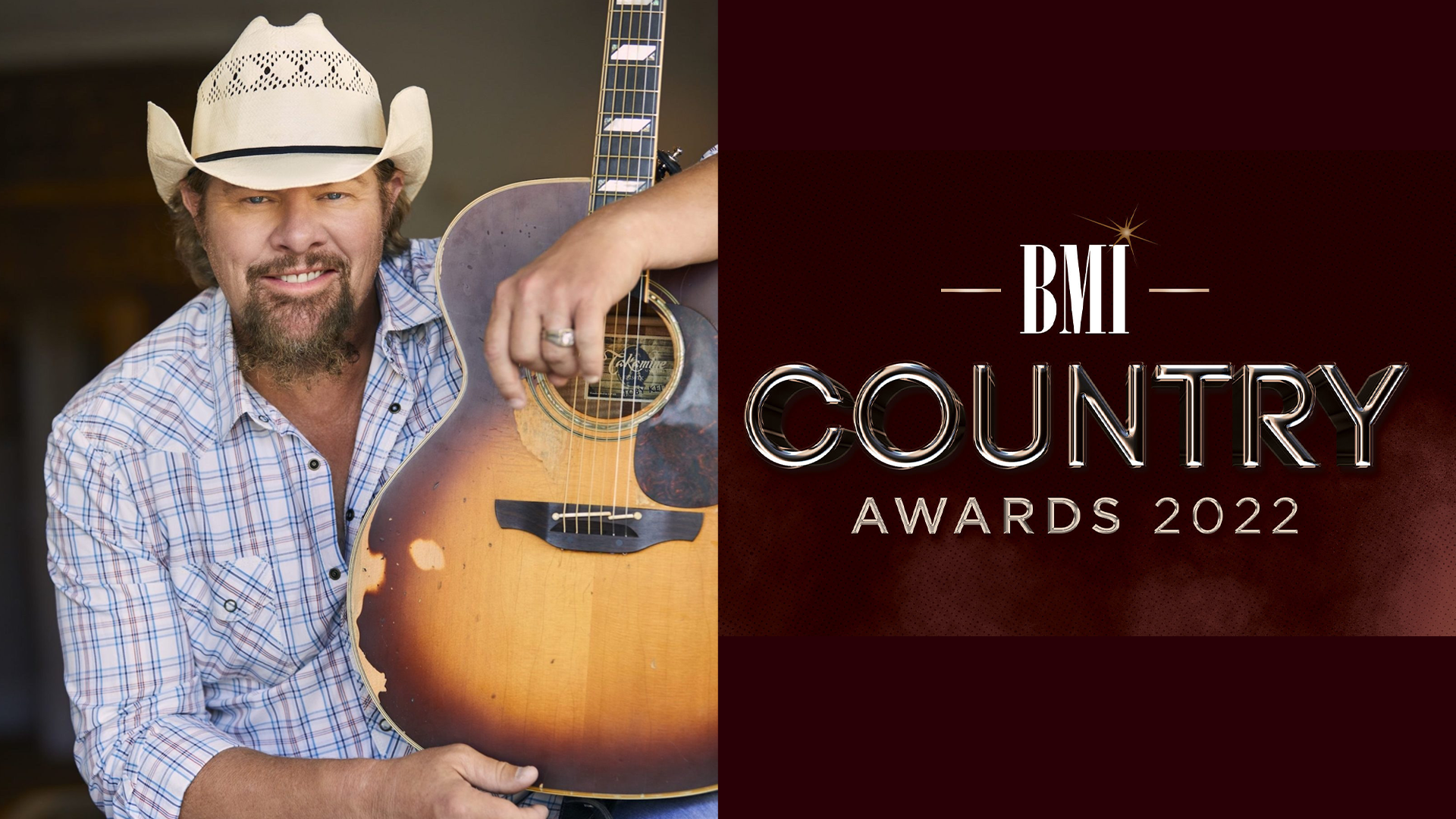 BMI will also crown the Country Songwriter, Song and Publisher of the Year, as well as salute the writers and publishers of the past year’s 50 most-performed songs from BMI’s Country catalog at the invitation-only event.

The BMI Icon Award is given to exceptional songwriters in recognition of their “unique and indelible influence on generations of music makers.” In receiving this award, Keith will join an impressive list of Country legends, including Loretta Lynn, Willie Nelson, Merle Haggard, Dolly Parton, Kris Kristofferson, and Hank Williams, Jr., as well as multi-genre royalty Stevie Nicks, Little Richard, Patti Labelle, James Brown, and more.

“We are honored to present Toby Keith with this year’s BMI Icon Award. Since the release of his single ‘Should’ve Been A Cowboy’ in 1993, Toby has been the gold standard of songwriting in the modern era of Country music,”

“We are honored to present Toby Keith with this year’s BMI Icon Award. Since the release of his single ‘Should’ve Been A Cowboy’ in 1993, Toby has been the gold standard of songwriting in the modern era of Country music,” says Clay Bradley, VP, Creative, Nashville. “Toby is not only a stellar songwriter, musician, and producer whose songs have amassed millions of performances; he is also a true humanitarian. With 11 USO tours under his belt, he continues to commit to honoring and serving our troops worldwide. No one is more deserving of this honor.”

Toby Keith is one of Country’s biggest hitmakers, with his most recent years serving as a remarkably accurate representation of his entire career. In 2021, he was bestowed the National Medal of Arts, inducted into the Nashville Songwriters Hall of Fame (having already been inducted into the all-genre Songwriters Hall of Fame in 2015), and honored with the Academy of Country Music’s prestigious Merle Haggard Spirit Award.

In 2018, Keith celebrated the 25th anniversary of his debut No. 1 single, “Should’ve Been A Cowboy” with the re-release of his debut album. Since his career began, Keith has sold more than 40 million albums and has had 32 singles hit #1. Impressively, he wrote a #1 hit every year for 20 straight years, among them “How Do You Like Me Now?!,” “Courtesy of the Red, White, & Blue (The Angry American),” “I Love This Bar,” “Beer For My Horses,” and “As Good As I Once Was.” In 2018, Keith released a song called “Don’t Let The Old Man In,” which was inspired by a conversation he had with Clint Eastwood and was later featured in Eastwood’s movie, The Mule. Keith has received the BMI Country Songwriter of the Year award three times, and his hit single “As Good As I Once Was” was awarded BMI’s Country Song of the Year in 2006. As a songwriter, Keith has had 26 number one hits, 11 of which he wrote on his own. Altogether, his music has garnered more than 10 billion streams and 100 million terrestrial radio spins.

Keith’s most rewarding experiences, however, have come from giving back locally, nationally, and abroad. His annual golf classics fund the Toby Keith Foundation and OK Kids Korral, a cost-free home for families of children dealing with critical illnesses, and his 11 USO tours have enhanced the lives of nearly 256,000 troops and military families. In 2014, he was given the Spirit of the USO Award for his work with the organization, which has so far included 11 tours and more than 285 events. In an even more personal instance of philanthropy, he became the face of his hometown after it was ravaged by a tornado, shouldering the cleanup, and headlining the 2013 OK Twister Relief Concert.

Celebrating over 80 years of service to songwriters, composers, music publishers and businesses, Broadcast Music, Inc.® (BMI®) is a global leader in music rights management, serving as an advocate for the value of music. BMI represents the public performance rights in over 20.6 million musical works created and owned by more than 1.3 million songwriters, composers, and music publishers. The Company negotiates music license agreements and distributes the fees it generates as royalties to its affiliated writers and publishers when their songs are performed in public. In 1939, BMI created a groundbreaking open-door policy becoming the only performing rights organization to welcome and represent the creators of blues, jazz, country, and American roots music. Today, the musical compositions in BMI’s repertoire, from chart toppers to perennial favorites, span all genres of music and are consistently among the most-performed hits of the year. For additional information and the latest BMI news, visit bmi.com, follow us on Twitter and Instagram @BMI or stay connected through Broadcast Music, Inc.’s Facebook page. Sign up for BMI’s The Weekly™ and receive our e-newsletter every week to stay up to date on all things music.