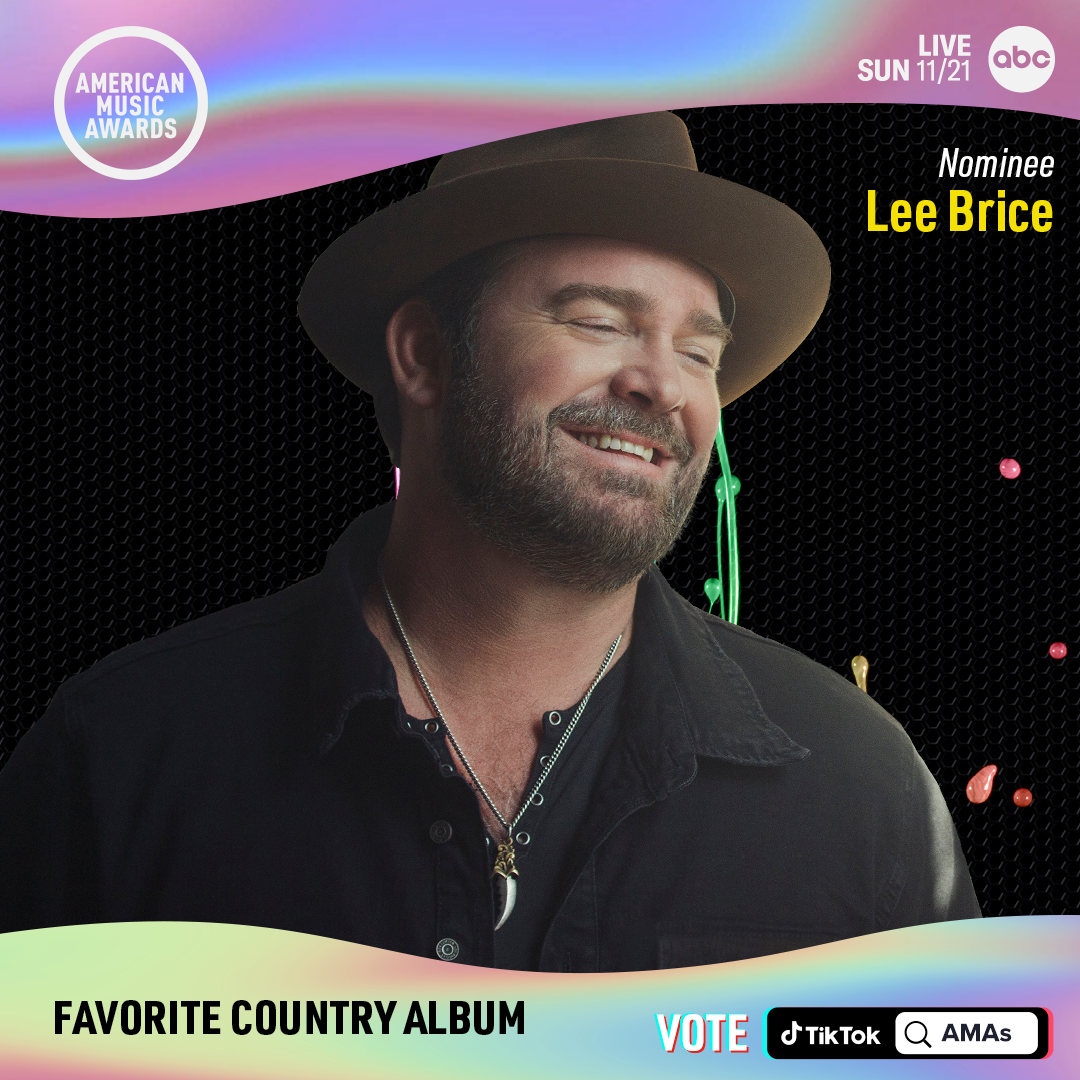 (October 28, 2021 – Nashville, TN) Curb Records recording artist, Lee Brice, has nabbed his first-ever nomination for the American Music Awards in the Favorite Country Album category for his latest album, Hey World. The nomination follows Lee’s fourth consecutive #1 at Country radio with his massive hit, “Memory I Don’t Mess With.” The reflective Hey World also scored Lee the #1 spot with tracks “One of Them Girls” and “I Hope You’re Happy Now” with Carly Pearce.

“What a incredible honor,” says Lee. “Putting this album together during a pandemic presented us with some challenges, but also created new ways of making music that I will for sure lean back on in the future. I am proud to say that at the end of the day, it’s one of the best pieces of work I’ve ever put together. A big,  huge thank you to all my collaborators and team who helped me write, and put these songs together like we did, and an even bigger thank you to all the fans who have supported me and music for all these years!”

The 15-track collection was released during one of the most unique times in modern history. Moving through the experience of these songs takes you from the desire to shut out the craziness of the world through the title track, “Hey World,” to a message from the great beyond to family and friends with “Save The Roses,” onto the stop-you-in-your-tracks “Lies,” then all the way back around to the good times with lively tracks like “Atta Boy” and “More Beer” – all-in providing a fully-immersive, perspective-bringing, real-life look at our world today.

The American Music Awards will take place on Sunday, November 21st at 7:00pm CST on ABC.

When Curb Records recording artist, Lee Brice, isn’t selling out arenas, writing and recording songs, or building new brands like American Born whiskey, you’ll find the family man with his wife Sara, two young boys, and daughter. Meanwhile, with over 3 billion on-demand streams, and over 3.6 billion spins on Pandora, Brice continues to enjoy massive success at country radio, digital streaming services, and on the road. He recently reached #1 at Country Radio with “Memory I Don’t Mess With,” which consecutively follows three prior #1s: “One of Them Girls,” “I Hope You’re Happy Now” with Carly Pearce, and “Rumor,” which was nominated in the category Single of The Year at the 55th Annual ACM Awards. One of the most-played country artists of all time on Pandora, he was the second country artist behind Keith Urban to receive the Pandora Billionaire plaque. Lee is also a GRAMMY nominee, a CMA and ACM award winner, and he’s taken nine radio singles to Number One: “A Woman Like You,” “Hard to Love,” “I Drive Your Truck,” “I Don’t Dance,” “Drinking Class,” “Rumor,” “I Hope You’re Happy Now,” “One of Them Girls,” and “Memory I Don’t Mess With.” Garth Brooks, Jason Aldean, Kenny Chesney and others have recorded his songs, and he’s performed on numerous TV shows, including NBC’s Today, ABC’s The Bachelor, NBC’s The Voice and FOX’s Miss USA 2018. Lee performed as part of the Library of Congress Gershwin Prize for Popular Song honoring Garth Brooks, aired on PBS March of 2020. At the 54th Annual CMA Awards, Lee took home the prize for Musical Event of the Year for his song with Carly Pearce, “I Hope You’re Happy Now.” At the 56th ACM Awards, “I Hope You’re Happy Now” won Single of the Year and Music Event of the Year, and Lee and Carly Pearce performed the song live. Lee’s latest album release is Hey World.

George Strait, The Official Music Video For “The Weight Of The Badge”