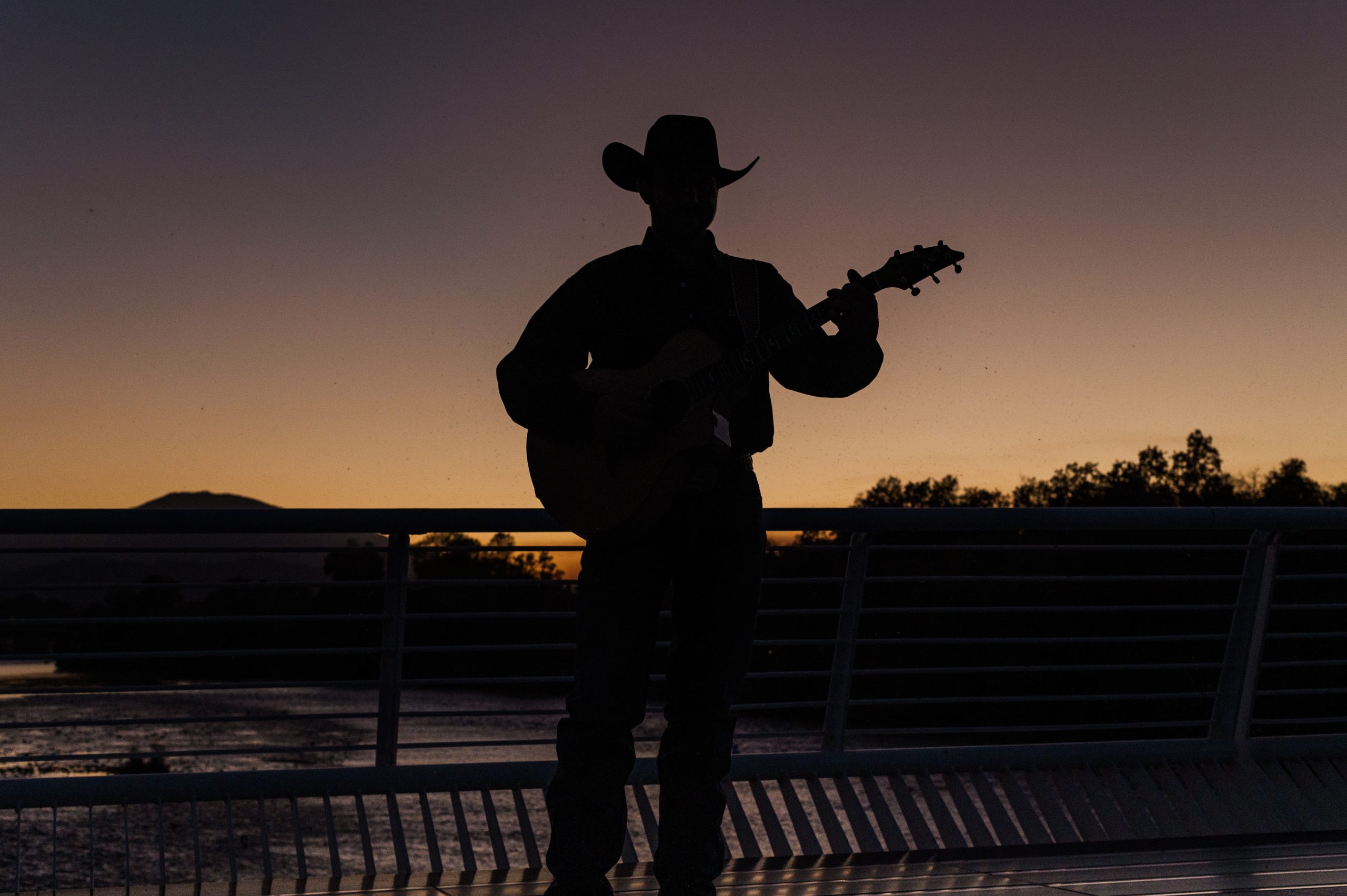 This week we are honored to feature CHAD BUSHNELL, not only is Chad an incredible artist he is also a California Cowboy who has competed in rodeo as both a steer wrestler and team roper and was active in many other sports. He is an accomplished farrier and is a graduate of Chico State University with a bachelor’s degree in Business Marketing.

Tomorrow, Chad will be releasing his NEW SINGLE “Fallin’ In Love With You” you will hear first here on Tenn Texas Radio proudly.

Chad took some time out of his busy schedule to share an interview with us, and we will have him on LIVE with us as soon as our platform is complete.

That’s a loaded question! For starters, my name is Chad Bushnell and I’m from Red Bluff, CA. I
travel throughout the western states performing energetic country music shows where I’ve had the honor to open for Kris Kristofferson, Dwight Yoakam and many more. I’ve made appearances on tv shows such as Universal Huntress and The 700 Club. Recently, KIXE released North State Roots which was my first PBS special, and I appeared in my first movie called Righteous Blood. When I’m not performing, I work as a farrier and love being on the ranch and Red Bluff is the perfect place to be for such. Actually, the Red Bluff Round Up is the largest 3-day rodeo in the country.

How has your experience as a rancher in the western lifestyle shaped you into your musical career?

“Many of my family members were ranchers and passionate music lovers/musicians. I specifically remember when they ranched years ago in northern California throughout Mendocino and Humboldt County. They listened to and played a lot of older, hillbilly style country music which became my favorite. I feel that the Bakersfield sound was a big part of my upbringing. Both sides of my family were very much into Buck Owens, Merle Haggard, early Dwight Yoakam, etc, and as I’ve gone back and forth to Nashville, I’ve heard producers and other artists say I have Bakersfield influence in my music. I hope to keep that sound infused in my future recordings.”

Do you have a favorite American West Sport Athlete? In Rodeo, Equestrian, etc…

My favorite sport has always been rodeo. I love everything about it. It is part of my family heritage and I pray that it continues to be big part of American Sports. I appreciate talented pro rodeo athletes like Trevor Brazil, Luke Branquino and Kaycee Field, and they are incredible to watch. Knowing what they do and how hard they work is part of what helps me keep my driven perspective to continue with my music career.

My favorite sporting event is Steer Wrestling. I started competing as a steer wrestler during my junior year of high school and I still remember the adrenaline rush. It sort of sits between Bull Riding and Team Roping…a little more of an adrenaline rush than Team Roping, but not as dangerous as Bull Riding. I love to watch the best guys in the world compete against each other at pro rodeos, especially Steer Wrestling.

Who has made the biggest impact on your life so far, and why?

As far as music goes, I would say Dwight Yoakam and Vince Gill have made the biggest impact on me. They have always been my favorite country singers and have inspired me to do what I do. It’s hard to put into words how much their music means to me. My parents, sister and wife have made a huge impact on my life as well. They keep me grounded and encourage me to pursue my career as a country singer. My dad taught me how to play guitar and sing when I was a young boy. Now, my mom is not only my biggest supporter but actually handles my merchandise, and my sister, who is also a pro rodeo athlete, helps with my graphics, among other things. My wife is one of the most supportive people I know, and I’m continuously impacted by her encouragement. Really, I’m very blessed with the support I have from all of them. I also have to mention my great grandma “Moom”. She was a big part of my life and a lot of what inspired me to pursue my music career. She played piano and sang in church. I began to accompany her at a young age and continued to do so until her passing. I loved playing old Gospel hymns and traditional country songs with her, and I even wrote a Christmas song about her that I have yet to record and release.

What have you learned from your biggest failure so far?

Everyone struggles with something. For me, I tend to take things the wrong way and overreact to things people say to me, and I’d say that’s been my “biggest failure.” You need very thick skin in the music business, and I naturally don’t, so I’ve had to develop ways to deal with that. As I’ve gotten older, I have learned to treat my music career as a “business” more and more, and I feel that has helped me not take things as personally and manage any negativity thrown my way. Plus, treating my career as a business has helped it grow and thrive, so that’s a definite plus!

What was the first song that you heard or concert that you attended, that empowered you to become an artist?

My family and I have talked about this quite a bit. The song we always refer to that first got me
inspired was “Ain’t Nothin’ Wrong With the Radio” by Aaron Tippin. I was a huge fan of his at a
young age. My parents told me I went crazy when that song came on the radio when I was a young boy. Fast country/rock songs have always been my favorite to perform at shows since I heard that.

What has been the greatest pinch-me moment so far in your career?

Without a doubt getting to meet Merle Haggard and record a couple songs at his studio has been the greatest pinch-me moment so far. I was recording my first couple albums with Bruce Turgon, the bass player for Foreigner, and one day he mentioned that he would ask Ben Haggard to play lead guitar on some of my tracks. Not only is Ben Haggard the youngest son of Merle, he’s also an incredibly talented guitar player. I was very excited for the opportunity and to have him play on some of my songs. A few years later, the opportunity came for me to record at Merle’s studio. Not only did I get to record two songs and have most of the Strangers – Merle’s band – play on it, but I got to talk with Merle. It has definitely been the greatest music experience of my life and Ben Haggard has become one of my very good friends since then. I have him to thank for the opportunity. The Haggards are great people.

Here in Nashville there is a lot of push to embrace the roots of Country Music, like Williams, Nelson & Haggard Country however we see more of the Americana, Folk, Country Pop, Country Rap, Country Rock and Finally Texas Country aka Red Dirt Country. What Genre do you feel fits you best and what challenges have been the toughest as an artist today in Country Music?

I am definitely a Traditional/Contemporary Country artist. I’ve held onto the real country sound in most of my music as well as my country roots. I still wear cowboy boots and a cowboy hat like many traditional country singers, and I think I always will as it’s a large part of where I come from and my musical influences. Though I’ve recently released a few Texas Country songs and enjoy to put out fast, country-rock songs… those will always be my favorite to perform on stage.

We love the Texas Twang you bring to the songs you sing, and your new release is no exception. Tell us the story of your upcoming release of “Fallin’ In Love With You”, who are the songwriters and what inspired you to cut this track?

Thank you for the compliment on “Fallin’ in Love With You”. I was sitting at home one weekend and figured I needed a mid-tempo love song on my upcoming album. It just sort of came to me after I was messing around on my guitar. The “Firecracker” album by Josh Turner has always been one of my favorite albums since high school and I had recently been listening to it. “Fallin in Love With You” was influenced by one of the songs on that album.

What is your favorite quote or scripture?

“Do unto others as you would have them do unto you.”

Fans always want to know, what do you enjoy doing when you are away from the music scene?
I love being in the music business and performing, but I love to wind down and hunt and fish whenever I can. I’m very family oriented, so I enjoy traveling with my wife, roping with my sister when she’s home, and hunting with my dad and uncle on our old family homestead. I also love to just be home doing small projects around the house if I have time. Cutting firewood and stacking/ burning brush are two of my favorites.

You have performed with many of the best in the business, Lee Brice, Dwight Yoakam & Aaron Watson to name a few, how awesome was it to receive an invite to join these amazing artist on tour and what other artist do you hope to go on tour with and why?

It has been an honor to open for and hang with some of my 90’s Country heroes like Dwight Yoakam, Tracy Lawrence, Mark Wills has been a dream come true; and Bryan White and Lee Brice are both great dudes and I’m thankful to have had the opportunities to not only open for them but hang out with them for a bit. It’s hard to top some of these experiences, but I’d say one of my goals is to open for Vince Gill, and maybe even sing Liza Jane with him.

2023, is drawing near, what can we expect from Chad Bushnell starting out the new year? Tours? New Music?

I am very excited for 2023. I feel that this is going to be one of my best years so far. I’ll
finally be releasing my new album Whiskey to Work, and we already have shows lined up in Nashville and California. It’s going to be great. I’ll keep my socials and website updated for you!

Join us and stay connected with Chad Bushnell in the links below:

COLE SWINDELL TO PERFORM HIS FIVE-WEEK NO. 1 “SHE HAD ME AT HEADS CAROLINA” ON THE TONIGHT SHOW STARRING JIMMY FALLON TUESDAY, NOVEMBER 22ND