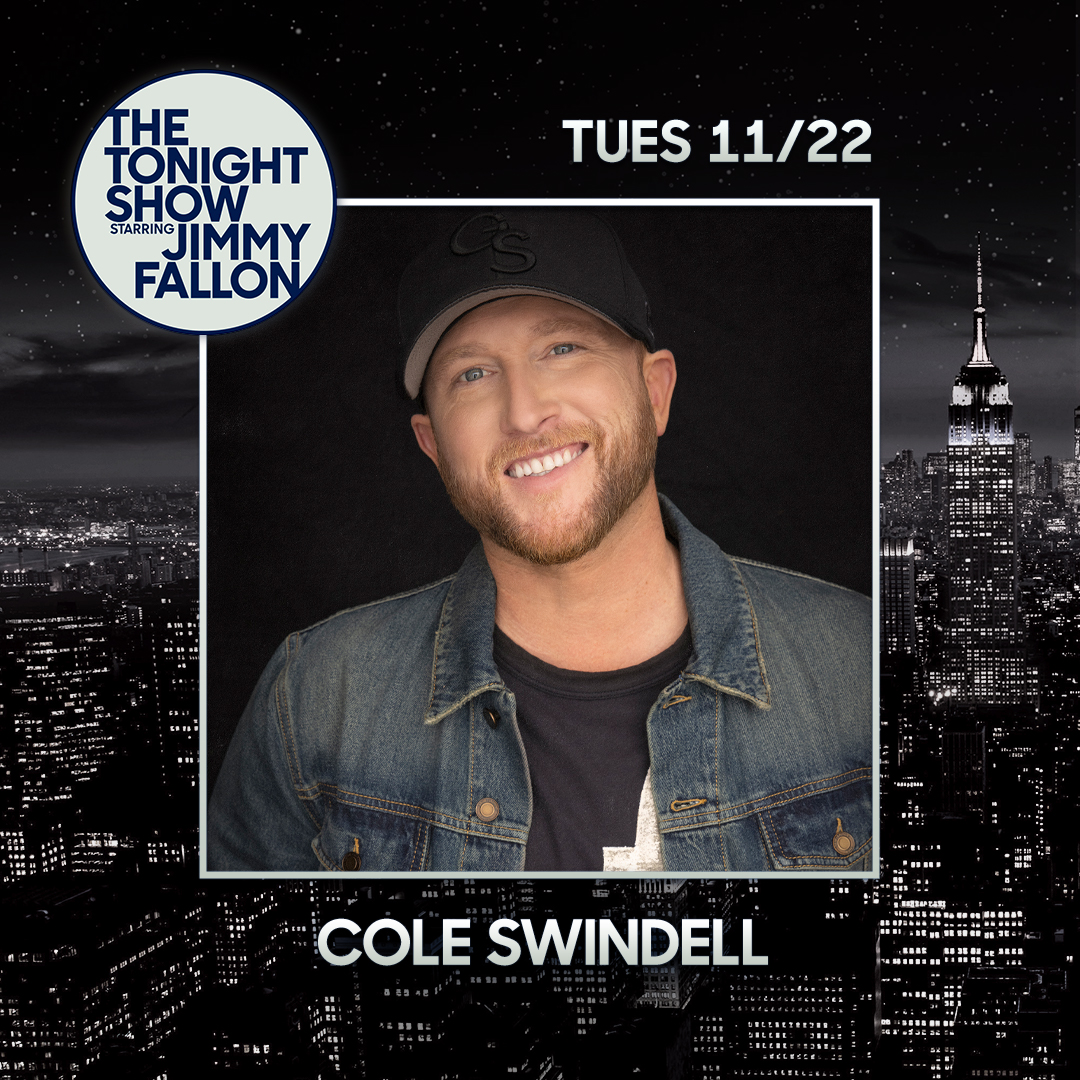 NASHVILLE, Tenn. – (November 18, 2022) – Multi-Platinum selling superstar Cole Swindell wraps his multi-sell out Back Down To The Bar Tour with just two more shows this weekend (Hard Rock Live in Orlando, FL and Pompano Beach Amphitheater in Pompano Beach, FL) before he heads to New York City to perform his Platinum-certified multi-week No. 1 single “She Had Me At Heads Carolina” on The Tonight Show Starring Jimmy Fallon on Tuesday, November 22 at 11:35 ET/PT / 10:35 CT.

Last week Swindell released a special duet remix of his Platinum-certified five-week No. 1 single “She Had Me At Heads Carolina” this week featuring Jo Dee Messina. HERE.

Swindell had one of the most-talked-about CMA Awards performances of the night last Wednesday with the surprise appearance of country star Jo Dee Messina joining him to perform this special duet remix of five-week No. 1 single “She Had Me At Heads Carolina.” Messina is the original artist of the 90s country smash “Heads Carolina, Tails California,” and the inspiration for Swindell’s most recent career-defining hit.

“CMA Awards Collab of the Century.”

“Jo Dee Messina has given Cole Swindell’s ‘She Had Me At Heads Carolina’ her stamp of approval!”

“Cole Swindell pulled off the biggest surprise of the CMA Awards when he shocked viewers with a very special guest during his performance: Jo Dee Messina,” and “the audience inside Nashville’s Bridgestone Arena went wild at the sight of the country hitmaker.”

Swindell “transported the 2022 CMA Awards back to the ’90s with an energetic performance of his nostalgic track…” and the “crowd let out a joyful cheer as Messina joined Swindell to power through the infectious chorus of her beloved 90s hit.”

Watch the evening’s biggest performances from The 56th CMA Awards at YouTube and the full show is available on Hulu.

“She Had Me At Heads Carolina” is the third Platinumâ-certified consecutive multi-week No. 1 single from his fourth album, Stereotype, following the “Single Saturday Night” (Platinum) and his “Never Say Never” (Platinum).

The Georgia native’s Platinum-selling “She Had Me At Heads Carolina” is his 12th career No. 1 and fastest-rising single to date, topping the charts in just 12 weeks. It made him the only artist in 2022 to have a FIVE consecutive-week No. 1 across the Billboard and Country Aircheck airplay charts. “She Had Me At Heads Carolina” has amassed the largest airplay audience of any country single this year and remained at No. 2 on the Billboard chart for an additional month after its historic run at No. 1. The single broke records as the first five-week chart-topper from Warner Music Nashville since Blake Shelton’s “Austin” in 2001, and it boasts more than 250 million global streams. Earlier this year Pandora honored Swindell with the elite BILLIONAIRE plaque for surpassing three BILLION lifetime spins. He has earned more than 5.2 BILLION global streams throughout his career

The lauded performer wraps his Back Down To The Bar Tour with Ashley Cooke and Dylan Marlowe this weekend with shows in Orlando (Nov 18) and Pompano Beach, FL (Nov 19). He will join Thomas Rhett for the Home Team Tour 23 in 2023.

For tour dates and to purchase tickets go to www.ColeSwindell.com.

Swindell will join his friend/multi-Platinum entertainer Thomas Rhett next summer for his Home Team Tour 23.

Country music superstar Cole Swindell released his fifth studio album, Stereotype, to massive success. The project has already charted three back-to-back multi-week No. 1 hits: the Platinum-certified “Single Saturday Night,” the Platinum-certified “Never Say Never” (with Lainey Wilson) and, most recently, the Platinum-certified, five-week chart-topper “She Had Me At Heads Carolina.” In the seven years since his debut on Warner Music Nashville, Swindell has racked up an impressive 12 No. 1 singles as an artist – 13 as a songwriter – as well as 12 certified Platinum singles (one single at 3x Platinum and four at 2x Platinum), a Platinum-certified debut album (Cole Swindell), a Platinum-certified sophomore effort (You Should Be Here) and a Gold-certified third entry (All Of It). The Georgia hitmaker has over 5.2 BILLION global career streams. His massive, GRAMMY-nominated hit “Break Up In The End” was named the 2019 NSAI Song of the Year. Swindell earned two nominations (Musical Event of the Year and Music Video of the Year) for “Never Say Never” at the 56th CMA Awards.  Swindell officially became a headliner on his own in 2018 with his Reason To Drink Tours, and he is currently out on the road with Ashley Cooke and Dylan Marlowe for his Back Down To The Bar Tour. He will join Thomas Rhett on the Home Team Tour in 2023.
For complete information and upcoming tour dates, sign up for the Down Home Crew at www.ColeSwindell.com.