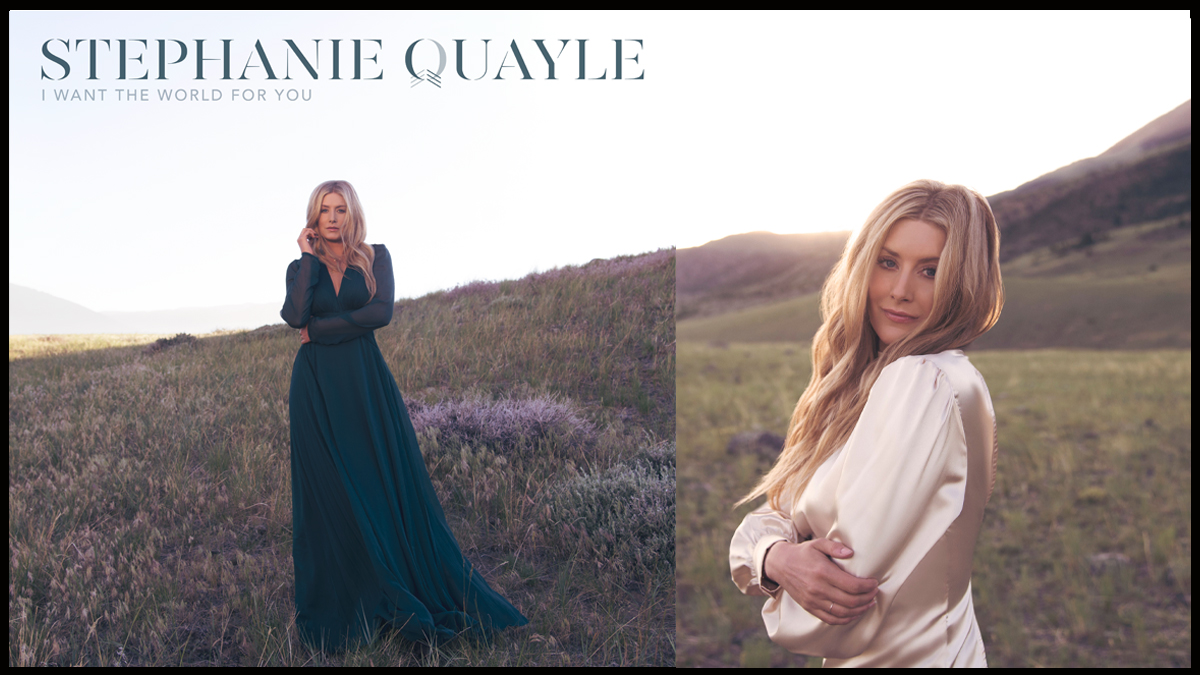 (October 22, 2021 – Nashville, TN) Big Sky Music Group recording artist, Stephanie Quayle, has released her latest single, “I Want The World For You,” available now. The encouraging track was written by Quayle, Tiffany Goss, Adam Wood and JR McCoy, and produced by Alex Kline. The song is a beautiful wish for you and your loved ones to take-on the world with kindness and to see that nothing is truly off-limits when it comes to embracing life and all it has to offer.

LISTEN: “I Want The World For You”

“When we wrote ‘I Want the World for You,’ it was one of those divinely magical times where the song comes together so beautifully. Our hearts were collectively in the same place. We felt that universal message of goodness,” says Quayle. “I was thinking about my step-kids and what I want for them, and I was thinking about all the amazing people I’ve met through this music journey (and have yet to meet). This is a song of unconditional love for everyone.”

In the spirit of the heart-warming lyrics, Quayle will launch the coordinating Give The World campaign which will kick off on November 5th. The initiative is meant to spark a movement of kindness and generosity as we head into the holiday season. Fans will be able to follow along and engage at various events and on social media to give the world to one another.

Fans can also see Stephanie as she headlines the Lucchese Listener Lounge Series in partnership with iconic brand, Lucchese Bootmaker. In addition to the Listener Lounge Series, Stephanie has a new collaboration with Lucchese on an exclusive custom line of boots designed by the Country music star. She will also be featured as the face of their upcoming Fall and Winter retail campaigns. The Stephanie Quayle boot line will include six variations including: Traditional Western Boot, Roper Boot, Exotic Western Boot, Heeled Western Boot, Tall Western, and the Quayle signature Western Bootie. Each boot will receive some extra flair with the special “Q” logo lasered into the leather.

For additional information on Stephanie, including new music and upcoming shows, please visit:

Big Sky Music Group recording artist, Stephanie Quayle, has had a massive presence at country radio garnering over 100 million audience impressions and ranking Top 10 in Current Female Airplay with standout singles “Whatcha Drinkin ‘Bout” and “Selfish” in the last few years. The CMT “Next Women of Country” inductee has been tapped as a Grand Ole Opry darling, making multiple appearances into the iconic circle and performing on the historic Ryman Auditorium stage. Quayle was included in the star-studded weeklong line-up to celebrate Dolly Parton’s 50th Anniversary of being a Grand Ole Opry member. The entertainer has shared stages with artists like Willie Nelson, Bonnie Raitt, Aaron Watson, LOCASH, and many more; and in a once in a lifetime opportunity, the charismatic performer was the only independent act invited to perform for the five living former U.S. presidents (Obama, W. Bush, Clinton, H.W. Bush and Carter) alongside artists like Lady Gaga and Alabama as part of the hurricane relief concert “Deep from the Heart: The One America Appeal” in Texas. The singer-songwriter’s booming personality has also been tapped as a special guest host for Wrangler Network, the Circle Network, Sounds Like Nashville, and One Country on the ACM Awards, CMT Awards and CMA Awards red carpets. She has been highlighted in People, Huffington Post, Glamour, Hollywood Life, Inspirer Magazine, Taste of Country and Billboard.com, to name a few. Quayle was recently named the First Female Country Music Ambassador for Bass Pro Shops & Cabela’s, and also serves as music ambassador for Murdoch’s Ranch & Home Supply, an original store from her hometown of Bozeman, MT. She has teamed up with national brands Harley-Davidson, Kampgrounds Of America (KOA), Lucchese Bootmaker, Winnebago, Wrangler, and Running Iron Whiskey. She is an active supporter of charitable organizations like the American Heart Association’s Go Red for Women movement, Care Camps, and St. Jude Children’s Research Hospital.