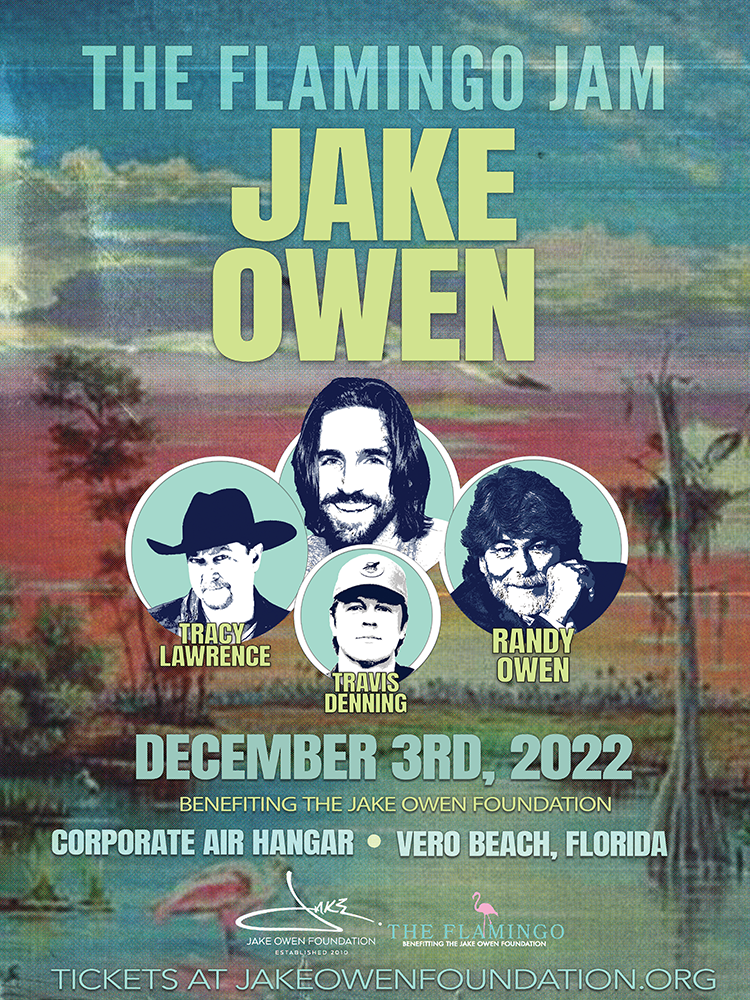 Tickets are on sale now.

“It’s that time of year again,” Owen shared on social media. “I can’t begin to tell you how excited and over the moon I am about these guys coming to my little town of Vero Beach, Florida to help support the mission of The Jake Owen Foundation.”

“Our foundation is one of the most rewarding things I’ve been a part of,” he continues, “and this event is a big part of our efforts to support those who need it most. In the aftermath of Hurricane Ian, we’re more committed than ever to giving back to the state that raised me and helping out in any way we can. I can’t wait to see our community show up and make a difference.”

Established in 2010 with a mission to provide financial support for the communities of Florida’s Indian River County and Vero Beach, The Jake Owen Foundation has since expanded, also benefitting children battling catastrophic childhood diseases at St. Jude Children’s Research Hospital in Memphis, Tenn., and serving people in the places they call home nationwide. Assisting through healthcare, fitness, nutrition, enrichment, youth programs, education, and crisis care, The Jake Owen Foundation has raised more than $3.5 million dollars for charitable causes and for other nonprofit organizations.

With a career-spanning collection of gold and platinum certifications, ten #1 singles, and over 2.5 billion U.S. on-demand streams, Jake Owen has ascended to stardom as a mainstay country staple. Known for his laid-back style and genre defining hits like “Barefoot Blue Jean Night,” “American Country Love Song,” and “Alone with You,” Owen’s most-recent album, Greetings From…Jake via Big Loud Records, delivered three #1 hits – “Made For You,” “Homemade” and “I Was Jack (You Were Diane)” – and a top five smash “Down to the Honkytonk.” Praised by Billboard as a “country-grounded odyssey,” the record follows popular album American Love, which debuted at #1 on Billboard‘s Top Country Albums chart. Owen is on the road now on his headlining Up There Down Here Tour.

The Jake Owen Foundation was established in 2010 as a registered 501 (C) 3 private nonprofit foundation through the vision and effort by Jake Owen initially to offer financial support on a national level to children battling cancer and other catastrophic childhood diseases through St. Jude Children’s Research Hospital in Memphis, Tennessee while also providing assistance to various youth organizations and charities in Owen’s hometown of Vero Beach, Florida and surrounding Indian River County.

Today, the Jake Owen Foundation is proud to be able to expand its mission of helping people in the places they call home, all while supporting the beneficiaries who have been a part of the Foundation since its inception. Our helping hands are able to reach out anywhere and everywhere to make a difference — raising funds through private donations, brand partnerships, and special events assisting child and youth programs, education, healthcare, fitness, nutrition, enrichment and crisis care. By supporting organizations and charitable partners everywhere, the Jake Owen Foundation is evolving into a national charity, with a local approach. To date the Jake Owen Foundation has raised more than $3 million dollars for charitable causes and for other nonprofit organizations.

In 2017 at the AT&T Pebble Beach Pro-Am Jake Owen received the prestigious “Arnie Award”- named for the iconic golfer Arnold Palmer – alongside Phil Mickelson and Peyton Manning. Golf Digest gives the award to the most charitable golfers on the course, “Golfers who give back,” recognizing Owen for his many charitable contributions through the Jake Owen Foundation.

Jake Owen was also recently honored in name of the Jake Owen Foundation with a new state of the art synthetic turf youth baseball field and sports complex bearing his name in his hometown of Vero Beach providing “a fun and safe environment for kids in the area to play as well as character education programs and clinics for local youth.” The Jake Owen Field and complex was funded in partnership by the Cal Ripken Sr. Foundation and the Kevin Harvick Foundation and donated in large due to their personal relationships and shared beliefs of community support through their respective foundations.

“The Jake Owen Foundation is one of the most fulfilling things I have ever been involved with. What matters is, the kind of person you are. Your character …. Your legacy. What have YOU done for others? Music in my life has been great to me but the one thing I will always be most proud of and look back on ….. and be able to share with my daughters ….. are things that compliment your character. Giving back has always been important to me in everything I do.”