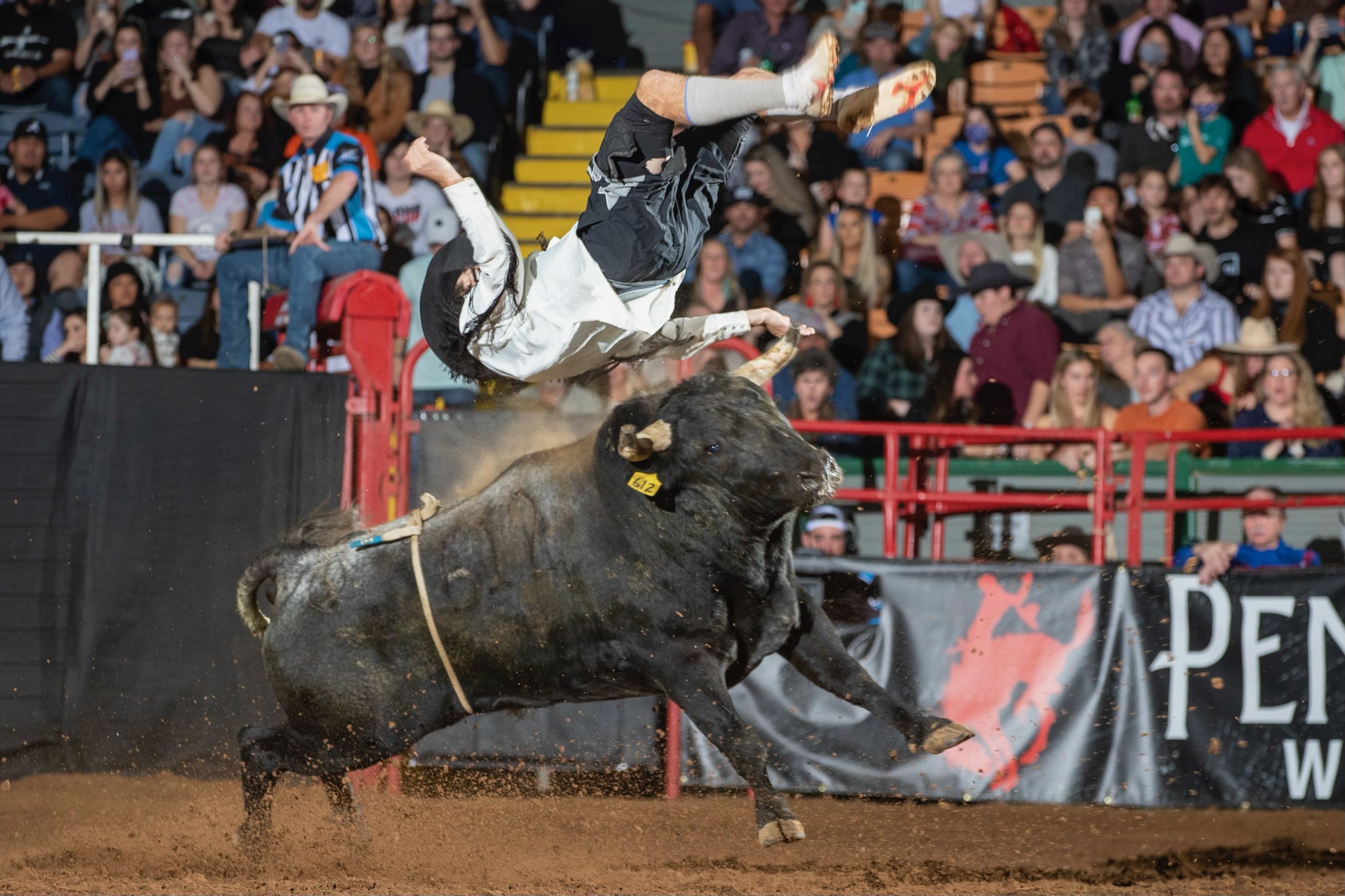 FORT WORTH, Texas (February 23, 2022) – In partnership with the PBR (Professional Bull Riders), Ultimate Bullfighters Inc. (UBF) today announced a 2022 residency at the iconic Cowtown Coliseum in Fort Worth, Texas. It will bring fans a bimonthly double-header event featuring a 12-man ultimate freestyle bullfighting showcase, followed by a performance of the popular Bulls Gone Wild, a unique blend of late-night comedy and world-class western sports competition.

The UBF was launched in 2020 as a partnership between Luke Kaufman, 2020 UBF Stock Contractor of the Year Chad Ellison and two-time PBR World Champion J.B. Mauney,showcasing the acrobatic western discipline of freestyle bullfighting. After awarding $237,000 in prize money in its inaugural season, the UBF paid out more than $350,000 in 2021.

In 2021, UBF brought its crown jewel to Fort Worth, holding its World Finals at Cowtown Coliseum in mid-December when Knox Dunn was anointed the UBF World Champion and awarded a check for $25,000.

The 2022 Fort Worth residency will begin on March 10, with subsequent events scheduled for March 24, April 7, April 21, and May 5. Action at Cowtown Coliseum will begin nightly at 7:30 p.m. CST with 12 of the planet’s top freestyle bullfighters competing for crucial points and prize money as they vie for the title of 2022 UBF World Champion.

In freestyle bullfighting, a bullfighter competes for 60 seconds against a fighting bull predominantly of Spanish descent, scoring points for maneuvers performed during the one-minute competition. Unlike traditional bullfighting, the animals are not harmed. Bullfighters are judged solely on their ability to perform gravity-defying acrobatic stunts as close to the bull as possible without getting hit.

Following each freestyle bullfighting competition, fans will then be brought an iteration of Bulls Gone Wild.

Bulls Gone Wild is a bullfighting extravaganza that brings together celebrity guest stars, the world’s best freestyle bullfighters, and hilarious game show challenges in front of a live audience. The blend of late-night comedic antics and dazzling feats of athleticism is billed to be unlike anything fans have ever seen.

On May 13-14, the UBF residency at Cowtown Coliseum will bring eventgoers a unique late-night edition of Bulls Gone Wild. Exclusively featuring the one-of-a-kind entertainment of Bulls Gone Wild, the acrobatic, comedic action will begin nightly at 10:30 p.m. CST.

Tickets for the 2022 UBF events at Cowtown Coliseum go on sale Thursday, February 24 at 10 a.m. CST and can be purchased at CowtownColiseum.com.

Tickets start at $20, taxes and fees not included. For a more close-up experience, fans can also purchase Silver Spur Seats for $35, VIP Seats for $45 and Gold Buckle Seats for $50.

In May, the UBF will also unite with the PBR to hold a $100,000-added event in tandem with the organization’s inaugural World Finals held in Fort Worth. On May 13-14 and May 20-21 at 3 p.m. CST at Will Rogers Coliseum, the world’s best bullfighters will compete through a progressive elimination format attempting to be crowned the event champion and win their share of the landmark regular-season purse.

More than $250,000 is set to be awarded to UBF contestants by the end of the PBR World Finals in Fort Worth in May, setting the precedent for the richest year ever in the sport of freestyle bullfighting.

Stay tuned to PBR.com for further details on tickets for the $100,000-added event held in tandem with the PBR World Finals.

Fans will also be able to catch all the action from the 2022 UBF residency at Fort Worth, including the landmark event held during the 2022 PBR World Finals, on PBR RidePass on Pluto TV, the new, free, 24/7 western sports and lifestyle channel. PBR RidePass is available on desktops, laptops and mobile devices via www.pluto.tv. Tune to channel 720 for the latest programming schedule.

Additional UBF dates at Cowtown Coliseum will be announced in the coming months.

Alongside the residency events in the Lone Star State, the UBF also announced the league’s complete first-half schedule for 2022. Having already held events in Chicago, Illinois, Lexington, Kentucky, and Ocala, Florida, the complete remainder of their schedule is:

Alongside the residency in Cowtown and throughout the greater Fort Worth area, the 2022 UBF schedule features two additional series including stand-alone events, which will also be broadcast on Pluto TV, and the Bulls, Bands and Barrels Event Series.

On April 15-16, Clayton, Georgia, will host the first stand-alone UBF event of the year, the 2nd Annual Tallulah Falls Invitational. In 2021, the event was sold-out, and this year it will feature two nights of the world’s best freestyle bullfighters.

Founded in 2008; the UBF was created over a decade ago to promote the sport of freestyle bullfighting. In the action-packed sport of freestyle bullfighting, a bullfighter competes for 60 seconds against a fighting bull predominantly of Spanish descent in an effort to score points for maneuvers performed during the competition. Unlike traditional bullfighting, the animals are not harmed or killed. Bullfighters are judged solely on their ability to perform dangerous stunts as close to the bull as possible without getting hit. Having paid out over $1,000,000 since formation and over $500,000 in the past two seasons, UBF embarks on a new journey with a historic partnership with both the Professional Bull Riders (PBR) and Fort Worth, Texas including the UBF World Finals and an event series beginning in March 2022. For more, visit UltimateBullfighters.com