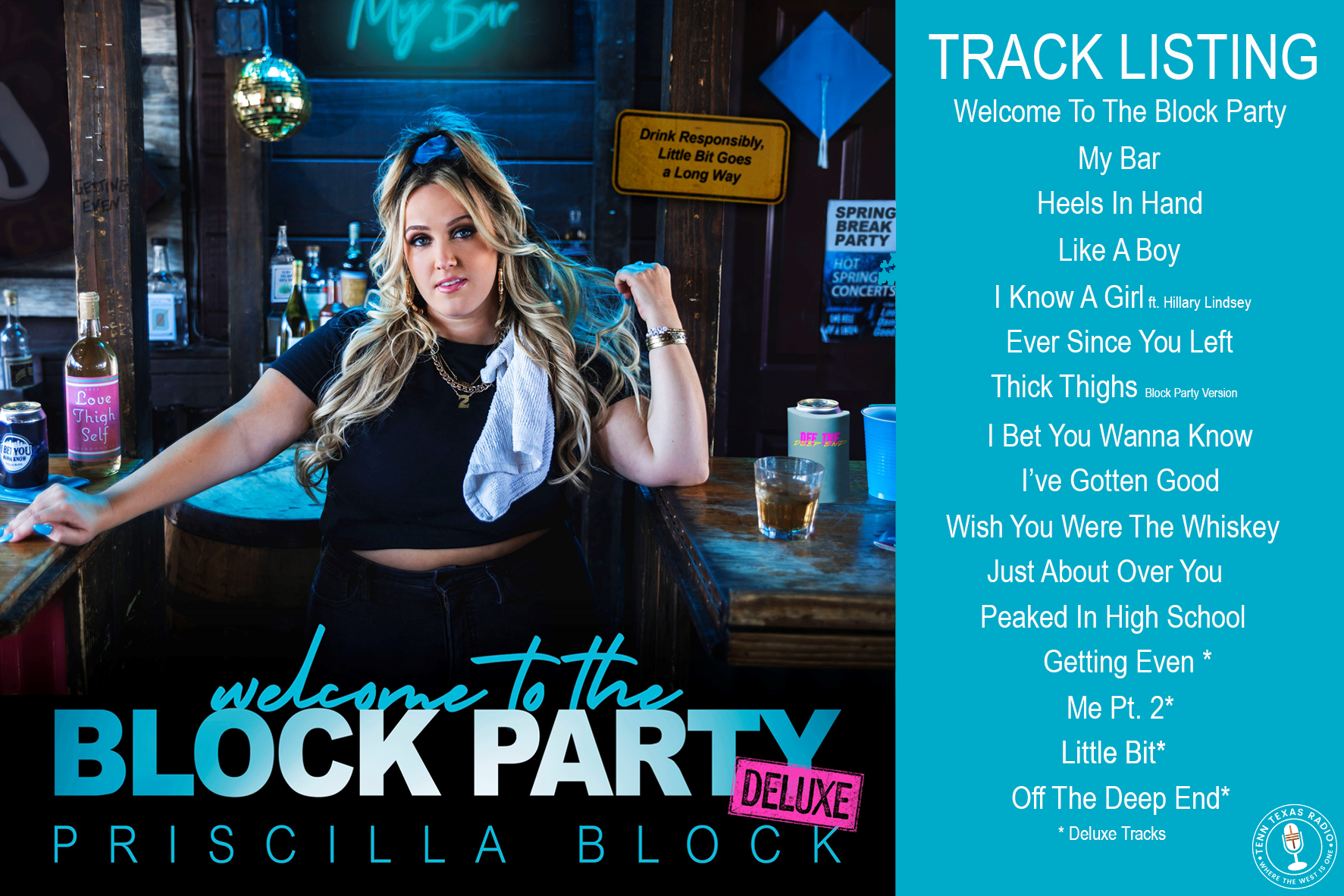 (January 13, 2023 – Nashville, TN) One of Country music’s biggest breakout stars of 2022, Priscilla Block, is kicking off the new year with the release of her new track, “Me Pt. 2” – out now along with the song’s lyric video. The painfully honest song written by Block will be featured on the Deluxe Edition of her impressive debut album, Welcome to the Block Party Deluxe Album, available everywhere on February 10th (pre-save available now). The deluxe edition of the album will include four previously unreleased tracks including, “Me Pt. 2,” and her recent hit, “Off The Deep End.”

“This is hands down one of the most honest songs I’ve ever written. It was 2 o’clock in the morning – just me, my guitar and a piece of paper. Sometimes it’s the simplest songs that hit the most and for me “Me Pt. 2” is that. This past year was really big for me, especially releasing my debut album. When we were selecting songs for “Welcome To The Block Party” we had so many songs to choose from, which is why I’m super excited for the deluxe album. Four more songs that complete the Block Party era.”

1. Welcome To The Block Party

6. Ever Since You Left

10. Wish You Were The Whiskey

After a year of huge career successes, including her first RIAA Platinum certification for her viral hit, “Just About Over You,” first nominations for ACM and CMT Awards, appearing on national TV including The Kelly Clarkson Show, ELLEN and The Tamron Hall Show, headlining her first tour and recently announced 2023 iHeart Radio Award nomination; Block is primed to take the year by storm with new music and tour dates (notably opening for Shania Twain on select dates during her highly anticipated Queen of Me Tour), as she continues to grow as an artist and performer.

Country artist Priscilla Block draws listeners in with her unfiltered, relatable songwriting and catchy melodies. Her gregarious personality and engaging stage presence has captured fans across the U.S. and abroad. Pegged as an “Artist to Watch” by virtually every major Country music media outlet (including Amazon Music, PANDORA, Spotify, CMT, The Boot, MusicRow, HITS, Sounds Like Nashville, Country Now, Music Mayhem and more,) Priscilla’s honest and upfront approach promotes self-love, empowerment, and acceptance through her own blend of country pop and southern rock, dubbed “the Block Party sound.”

Priscilla became the first Country music act to break from the social media platform, TikTok, and has quickly developed a rabid fanbase with songs like “Thick Thighs,” “PMS” and “Just About Over You.” Since the release of her fan-favorite track “Just About Over You,” the song peaked both the iTunes Country and All-Genre song charts, was named one of The New York Times Best Songs of 2020, reached Top 15 on country radio and garnered Priscilla her first RIAA Platinum Certification. She has surpassed more than 500 million digital streams and counting with tracks like “Just About Over You,” “Wish You Were the Whiskey,” “I Bet You Wanna Know,” and Top 25 charting hit, “My Bar,” all featured on her major label debut album, Welcome to the Block Party, which was included on The New York Times‘ list of “Best Albums of 2022.”

Originally from Raleigh, NC, Priscilla moved to Nashville to pursue music shortly after high school. In Nashville, the affable, hardworking, student of life worked multiple jobs to make ends meet, then a chance encounter with her idol – Taylor Swift – was the sign she needed to dive all the way in on her music. Since busting onto the Country music scene in 2022, Priscilla has made several national TV appearances including The Kelly Clarkson Show, ELLEN and The Tamron Hall Show. She has also been featured in notable publications such as The New York Times, Billboard, USA Today Network, PEOPLE Magazine, among others.