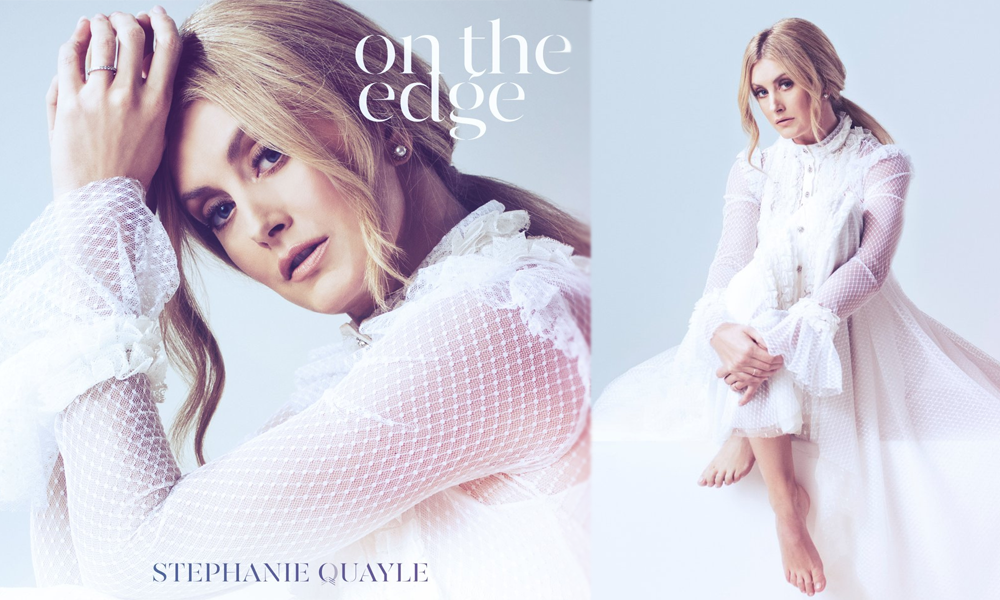 (November 4, 2022 – Nashville, TN) Big Sky Music Group recording artist and singer-songwriter, Stephanie Quayle, has released her latest album, On The Edge, available now. The impactful collection, produced by five-time Grammy nominated Paul Moak, is taken straight from the pages of Stephanie’s own life from a period of time where she was emotionally devastated, lost on her path forward and finally finding solace. Sharing her story for the first time publicly, Quayle hopes that her heartbreaking loss and following fallout, can be a source of strength and light for anyone whose felt grief and betrayal can too find self-redemption through their darkest times.

LISTEN: On The Edge Album

“The heaviness of the last 13 years is dissipating, the weight I’ve been carrying is becoming lighter and I’m excited to know me now.  With this new freedom of self and what I have to say with my songs, I feel like the depth of my purpose is coming into full view.  These feelings, thoughts, melodies and lyrics have been living in me for over a decade and now they get to live in the world. My greatest hope is that these songs will bring healing to others too.”

The eight tracks that make up On The Edge, explore the fundamentally human experience when in your darkest moments you’re faced with a decision, when you’re forced to choose between descending into the darkness or seeking the light. This album is a redemptive tale, and a profoundly personal one. After losing her boyfriend of four years in a plane crash, she soon learned she wasn’t the only woman in his life and the home they built together was covered in lies.  The lead single from the album, “The Lost Years,” is a heart wrenching tale of catharsis, serving as an inspirational track with a message of leaving the weight of the past’s traumas exactly there – in the past.

“This freedom is terrifying, and exhilarating.  I am still discovering more truths about this time in my life as I’m now able to look back with a whole lot of healing and a lot less hurt.”

“The Lost Years” moving music video was premiered exclusively with CMT.com and appeared on their two Times Square billboards on its day of release.

Quayle will celebrate album release day by stepping into the sacred circle of the Grand Ole Opry on Friday night to perform songs from the project.

Heading into 2023, Quayle will expand this project with hopes to give a voice to others who have experienced similar experiences.

Big Sky Music Group recording artist, Stephanie Quayle, has had a massive presence in country music with standout radio singles “Whatcha Drinkin ‘Bout,” “Selfish,” and digital releases like “Wild Frontier” in the last few years. The CMT “Next Women of Country” inductee has been tapped as a Grand Ole Opry darling, making multiple appearances into the iconic circle and performing on the historic Ryman Auditorium stage. Quayle was included in the star-studded weeklong line-up to celebrate Dolly Parton’s 50th Anniversary of being a Grand Ole Opry member. The entertainer has shared stages with artists like Willie Nelson, Bonnie Raitt, Carly Pearce, Ashley McBryde, and many more; and in a once in a lifetime opportunity, the charismatic performer was the only independent act invited to perform for the five living former U.S. presidents (Obama, W. Bush, Clinton, H.W. Bush and Carter) alongside artists like Lady Gaga and Alabama as part of the hurricane relief concert “Deep from the Heart: The One America Appeal” in Texas.

The singer-songwriter’s booming personality has also been tapped as a special guest host for Wrangler Network, the Circle Network, Sounds Like Nashville, and One Country on the ACM Awards, CMT Awards and CMA Awards red carpets. She has been highlighted on The Kelly Clarkson Show, The Ellen Degeneres Show, and in People, Huffington Post, Glamour, Hollywood Life, Inspirer Magazine, Rolling Stone Country, Taste of Country and Billboard.com, to name a few. Quayle was named the First Female Country Music Ambassador for Bass Pro Shops & Cabela’s, and has teamed up with other recognizable national brands Harley-Davidson, Kampgrounds Of America (KOA), Lucchese Bootmaker, Winnebago, Wrangler, Running Iron Whiskey, Yellowstone Country Montana, Montana Silversmiths and Murdoch’s Ranch & Home Supply. She is an active supporter of charitable organizations like the American Heart Association’s Go Red for Women movement, Care Camps, and St. Jude Children’s Research Hospital.