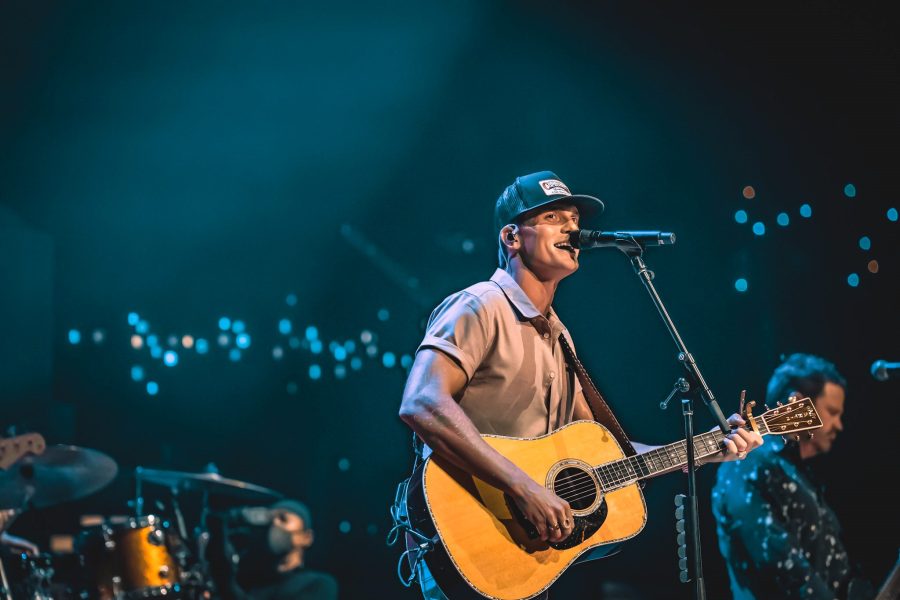 (September 9, 2022 – Nashville, TN) Parker McCollum is one of Country music’s hottest new acts and ever since bursting onto the scene in 2020, has accomplished a laundry list of both professional and personal bucket-list experiences – including making his Grand Ole Opry debut, breaking records at the iconic Texas venue Whitewater Amphitheater where he sold out a three-night engagement, and performed for a sold-out crowd at his RODEOHOUSTON debut. On September 7th, McCollum added another honor to his already impressive resume by making his debut at Austin City Limits, where he performed to a packed house, continuing to solidify himself as one of Country music’s next generation of superstars.

“I always wondered if we had what it took to be great – to make the big times,”

“I always wondered if we had what it took to be great – to make the big times,” says McCollum. “Constantly asking myself if all the miles traveled, empty bars played, late nights loading out would be worth it. Those questions were answered when we stepped on stage at Austin City Limits. We do have what it takes and It was absolutely worth it!”

Recently, Parker was announced as a nominee for the 2022 CMA Awards for “Best New Artist.” This recognition is yet another spotlight on McCollum following his first nominations at this year’s ACM Awards (“Best New Artist of the Year”) and CMT Award (“Breakthrough Video of the Year”).

Since exploding onto the Country music scene in 2020 with his critically acclaimed and top-selling debut Country EP of the year, Hollywood Gold EP, McCollum has achieved two #1 singles (the Double-Platinum selling, “Pretty Heart,” and its follow-up single, “To Be Loved By You”). His current single, “Handle on You,” is currently impacting Country radio.

McCollum is currently out on the road throughout the Fall. For a list of McCollum’s upcoming tour dates, visit HERE.

Singer/songwriter and multi-instrumentalist Parker McCollum released his major label debut album, Gold Chain Cowboy, with MCA. The album follows his Hollywood Gold EP which was met with widespread critical acclaim and became the top-selling debut Country EP of 2020. McCollum earned his first-ever No. 1 hit with his Platinum-selling premiere single, “Pretty Heart,” and his follow-up single, “To Be Loved By You,” also hit No. 1 on the charts. “To Be Loved By You” was also the highest first week debut album of 2021. In November of 2021, McCollum made his first late-night TV appearance performing on Jimmy Kimmel Live.

McCollum has been named an ‘Artist to Watch’ by Rolling Stone, Billboard, SiriusXM, CMT, RIAA, and more with American Songwriter noting, “The Texas native teeters on the edge of next-level superstardom.” MusicRow listed McCollum as their 2021 Breakout Artist of the Year and Apple also included him as one of their all-genre “Up Next Artists” Class of 2021. A dedicated road warrior, McCollum made his debut at the famed Grand Ole Opry in 2021 and he already sells out venues across the country (over 40 sold out shows nationwide in 2021) including record-breaking crowds in Dallas (20,000), The Woodlands (16,500), Austin (7500+), Lubbock (7700+), Jackson, MS (5000+), Kearney, NE (3000+), Nashville’s Ryman Auditorium, and three nights at Fort Worth’s iconic Billy Bob’s Texas. In March of this year McCollum made his debut at RODEOHOUSTON to a sold-out crowd with over 73,000 tickets sold. McCollum earned his first ACM award for New Male Artist of the Year in March 2022 in Las Vegas.  McCollum also won his first CMT “Breakthrough Video of the Year” award, a fully fan-voted honor, in April 2022.

ACM HONORS TO AIR TONIGHT ON FOX AT 8/7 CENTRAL