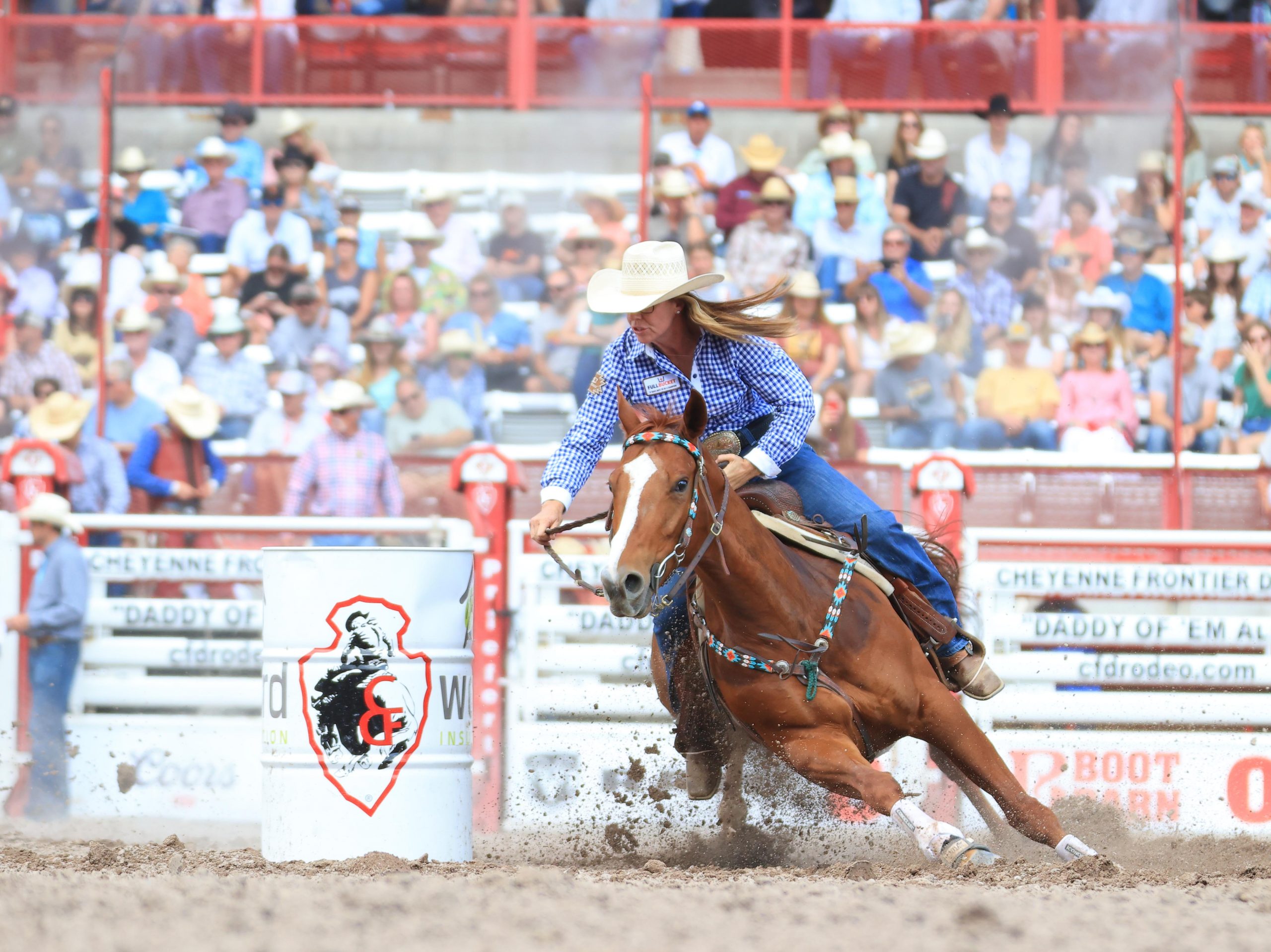 Clay Tryan and Jade Corkill, the final pair to rope on Championship Sunday, set personal and CFD records. They stopped the clock in 7.5 seconds to win the team roping. Tryan, from Billings, Montana, and Corkill, who lives in Fallon, Nevada, won Frontier Days for the second time roping together. They earned their first CFD championship in 2013.

Corkill, who also won titles here in 2009 with Chad Masters and last year with Clay Smith, joins three others who have won four championships at Frontier Park in a single event. With his winnings here, Tryan became the first team roper in the history of the Professional Rodeo Cowboys Association (PRCA) to pass $4 million in career earnings.

Andrea Busby, a Wyoming native who now lives in Brock, Texas, was the final barrel racer to compete. Five previous racers had stopped the clock in less than 17.3 seconds when Busby rode her mare Tito (registered name Blazin With My Dude) into the arena. Tito, who was making just her fifth run in a professional rodeo, crossed the finish line in a time of 17.13 seconds to win the title.

Busby, whose Wyoming roots are deep, grew up on a ranch near Lusk that has been in her family for more than a century. She made the 140-mile trip to Cheyenne many times growing up. She said that she always hoped she would ride and win at CFD, so this title made a childhood dream a reality.

Stetson Wright of Milford, Utah, rode another Sankey horse – Pendleton Roundup’s Marquee – for 88 points to win his second consecutive CFD title in saddle bronc riding. Wright had surgery on his hand in early July and stayed home for less than two weeks. He admits he may have started back too soon as he bucked off the first seven horses he got on after surgery. This week he turned the corner and has been on a winning streak. Wright’s family – his father, three brothers and four uncles – have competed at CFD, but Stetson is the only one to win championships at Frontier Park. He also has two CFD all-around titles.

Ora Taton, a 53-year-old cowboy from Rapid City, South Dakota, also won a second CFD title. Taton won the steer roping in 2003 and repeated the feat 19 years later. He was the first steer roper to ride from the box on Championship Sunday and set a pace of 13.6 seconds that no one else could beat.

Three timed events crowned co-champions on Sunday. In breakaway roping Macy Young of Whitman, Arizona, and Tiffany Schieck of Floresville, Texas, both caught their calves in 4.0 seconds. This was Young’s first time to compete in Cheyenne. She was not part of the invitational field when the event first was introduced in 2019; there was no CFD in 2020 due to the pandemic, and last year she was pregnant with her daughter Hadley. Schieck was roping here for the first time since 2019.

Ryan Thibodeaux of Stephenville, Texas, has competed in Frontier Park on Championship Sunday several times, finishing as reserve tie-down roping champion in 2019. He was the second roper to compete Sunday and turned in a time of 10.3 seconds. Two ropers later, eight-time National Finals Rodeo (NFR) qualifier Cory Solomon of Prairie View, Texas, tied Thibodeaux’s time. None of the next eight ropers could post a faster time.

Trell Etbauer of Goodwell, Oklahoma, grew up watching his father and uncles compete at The Daddy. His dad Robert won two world championships, his uncle Billy won five world titles and one CFD title, and his uncle Dan won two CFD titles, all in saddle bronc riding. Trell won the all-around title here in 2014. He set the pace in steer wrestling with the fastest time of the rodeo – 5.4 seconds –as the second cowboy to compete. No one came close to matching his effort until the final competitor, Justin Shaffer of Hallsville, Texas, managed to stop the clock in 5.4 as well. Schaffer had the quickest time in the finals last year, but a 10-second penalty cost him his shot at the title, so this year’s performance was redemptive.

Etbauer was riding a horse named Corduroy that his uncle Billy had raised and given to him as a wedding present 13 years ago. Trell had won calf roping money at Cheyenne riding Corduroy and started steer wrestling on him after an injury sidelined his steer wrestling horse last season.

The bull riding competition was feast or famine. Nine of the 12 finalists bucked off their bulls before the eight-second buzzer sounded. Garrett Smith of Rexburg, Idaho started the scoring with a 90-point effort on Dakota Rodeo’s bull Scary Larry. Josh Frost of Randlett, Utah, who is ranked second in the PRCA standings, matched Smith’s total on Dakota Rodeo’s bull Stretch.

But Caldwell, Idaho’s Brady Portenier made the ride of the day. He earned 92.5 points when he rode Stace Smith Pro Rodeos’ bull Let’s Gamble. Portenier, who qualified for the NFR in 2020, jumped from 23rd to 16th in the PRCA bull riding standings with his earnings at Frontier Park. That puts him in close contention for a return trip to Las Vegas to ride bulls in December.

The all-around title went to Coleman Proctor of Pryor, Oklahoma. Proctor, who has qualified for six NFRs in team roping, recently began steer roping. He and partner Logan Medlin finished seventh in the qualifying round of team roping but did not advance beyond the quarter finals. The steer roping was a different story. Proctor won third in the first round and first place in the second round. He finished fourth overall in the event which was enough to earn him the all-around championship.

Mark your calendars now and start planning your experience to The 127th edition of Cheyenne Frontier Days is scheduled for July 21-30, 2023.