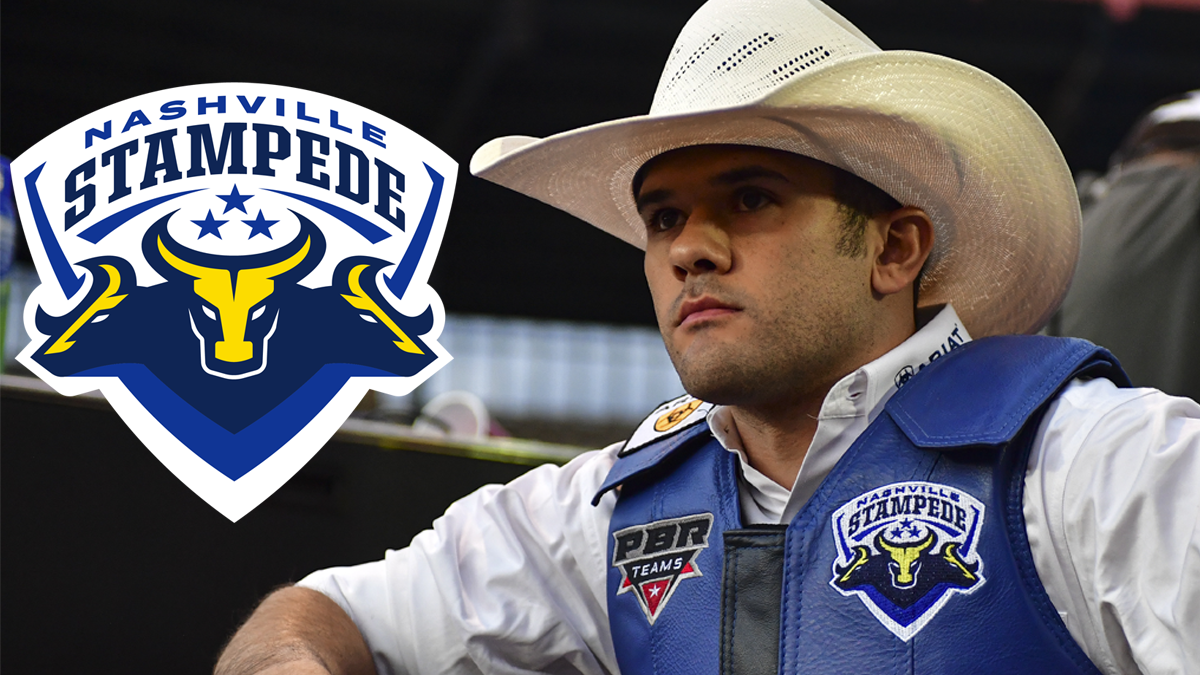 “It’s very important for me to officially be a part of the Stampede team and this family. It makes me really happy,”

“It’s very important for me to officially be a part of the Stampede team and this family. It makes me really happy,” says Pacheco. “I watched Justin McBride before I came to the United States. He’s one of the greatest bull riders we’ve ever seen, and it’s awesome having him behind me and supporting me.”

“I feel very lucky that as a coach of a brand-new franchise, Pacheco is the guy that lays the foundation for what the Stampede will be for years to come,” says Nashville Stampede Head Coach Justin McBride. “His past accolades speak for themselves, but his commitment to excellence and his calm demeanor are exactly what you want when tasking someone to lead a franchise.”

Pacheco has been one of the most consistent riders in the PBR since debuting on American soil in 2014.

The 2015 season marked the Brazilian native’s first in the PBR’s premier Unleash The Beast series, when he concluded the year No. 2 in the world, winning three elite tour events, including the stop in Nashville at Bridgestone Arena, and was also crowned Rookie of the Year.

In the seasons that followed, Pacheco finished No. 2 in the world in 2016 and No. 5 in 2017, before being crowned the 2018 PBR World Champion. After an incredible second-half surge during the regular season, Pacheco battled through torn ligaments in his left knee sustained days prior to the PBR World Finals to capture the coveted gold buckle. He concluded the year having gone 42-for-80 (52.5%).

While Pacheco spent the majority of 2019 sidelined as he recovered from injury, the “Ice Man” returned with a vengeance in 2020 when he concluded the season No. 6. In the two years since, Pacheco has finished runner-up to the world title in both 2021 and 2022.

During the most recent season, a resilient Pacheco, who was riding through a broken foot, contended for the gold buckle until the final out of the season. Throughout the 2022 PBR Unleash The Beast campaign, Pacheco logged two event wins and five 90-point rides. He also went a torrid 28-for-51, covering 54.90% of his bovine athlete opponents.

Two-time PBR World Champion McBride leads the team as Head Coach, and Tina Battock helms the front office as the General Manager of the Nashville Stampede.

“Securing Kaique as a rider and our team captain is an important pillar in the foundation of the Stampede team along with the support of our coaching staff and ownership,”

“Securing Kaique as a rider and our team captain is an important pillar in the foundation of the Stampede team along with the support of our coaching staff and ownership,” says Battock. “Our primary focus is to not only prepare for this season but to set us up for long term success.”

“It’s awesome to be able to help our teammates get better and help Justin bring along the younger riders,” says Pacheco. “I’m excited for what’s to come.”

With one regular series 2022 PBR Team Series event complete, the Nashville Stampede are currently fifth in the battle to bring Music City its next national title. At the season-launch event in Cheyenne, Wyoming, in late July, the Stampede went 1-1, including a 337.75-257.25 victory against the Carolina Cowboys in a dramatic shootout. In the team’s march to victory, Pacheco delivered a crucial 86.5-point ride on Mr. Winston.

When the PBR Team Series action continues in Kansas City, Missouri Aug. 5-7 for Outlaw Days, the Nashville Stampede and Pacheco will look to climb the standings as they play the Ariat Texas Rattlers, Kansas City Outlaws and Arizona Ridge Riders in five-on-five bull riding games inside T-Mobile Center.

During the 2022 season for the groundbreaking PBR Team Series, which transforms bull riding from an individual sport into one where riders compete in teams, each of the eight founding teams will compete in 28 games, held at 10 regular-season events, leading into a championship in Las Vegas (Nov. 4-6). In addition to competing at two neutral site events, each of the eight teams will host a three-day homestand.

The Nashville Stampede will play in Music City for the first time Aug. 19-21 when the team hosts Stampede Days at Bridgestone Arena.

Tickets for the three-day event are on-sale now, and start at $20, taxes and fees not included. Tickets can be purchased online at Ticketmaster.com and PBR.com, at the Bridgestone Arena Box Office, or by calling PBR customer service at 1-800-732-1727.

Three-day ticket packages will also be available, offering fans up to a 25% discount on select price levels.

About the Nashville Stampede:

Nashville Stampede are based at Bridgestone Arena in Nashville, Tennessee, where the team will hold its inaugural Stampede Days homestand on August 19-21, 2022, the fourth event of the 10-event PBR Team Series regular season. The Stampede are coached by two-time PBR World Champion Justin McBride. Under the leadership of General Manager Tina Battock, the Stampede are owned by Morris Communications Company, LLC (MCC), which is part of a privately held company with diversified holdings in media, real estate, property development and agribusiness. MCC is based in Augusta, Georgia. MCC’s current media holdings include Morris Media Network (MMN) which reaches millions of consumers with diversified content brands in print, digital, products and live events including Western Horseman, Barrel Horse News, Quarter Horse News, Road to the Horse, EquiStat and the National Barrel Horse Association. A portfolio of lifestyle publications and digital assets serve outdoor/sporting/travel enthusiasts with Alaska Magazine, Milepost, Gray’s Sporting Journal, Charlotte Magazine, Orlando Magazine, Savannah Magazine, Where Visitor publications and more, including the Nashville Stampede, one of eight founding teams in the new PBR Team Series.

The PBR Team Series is an elite new league that will feature the world’s top bull riders competing on teams in five-on-five bull riding games during an 11-event season beginning in July and culminating in a team championship at T-Mobile Arena in Las Vegas November 4-6.  During the 2022 season, each of the eight teams representing teams in Austin, TX; Fort Worth, TX; Glendale, AZ; Kansas City, MO; Nashville, TN; Oklahoma City, OK; Ridgedale, MO; and Winston-Salem, NC will host a three-day homestand.  There will also be neutral site games in Cheyenne, WY and Anaheim, CA. To determine team rosters, the league held a rider draft on May 23 prior to start of the 2022 season among any bull riders who have declared for the draft during a league eligibility window. The PBR Team Series builds on the existing structure of professional bull riding with the same basic rules for judging and scoring qualified 8-second bull rides. Events will be staged in a tournament-style format with all teams competing in head-to-head matchups against a different opponent each day. Each game will feature five riders per team squaring off against another team. Full team rosters will be comprised of seven riders on the core roster and three practice squad members. The team with the highest aggregate score of qualified rides among its riders will be declared the winner of each game. The event winner will be the team with the most game wins across an event, with a special bonus round designed as a tie-breaker to determine final event standings. All PBR Team Series events will be carried on either the CBS Television Network, streaming live on Paramount+, CBS Sports Network, or RidePass on PlutoTV.

PROVIDED COURTESY OF THE PBR TO TENN TEXAS MEDIA