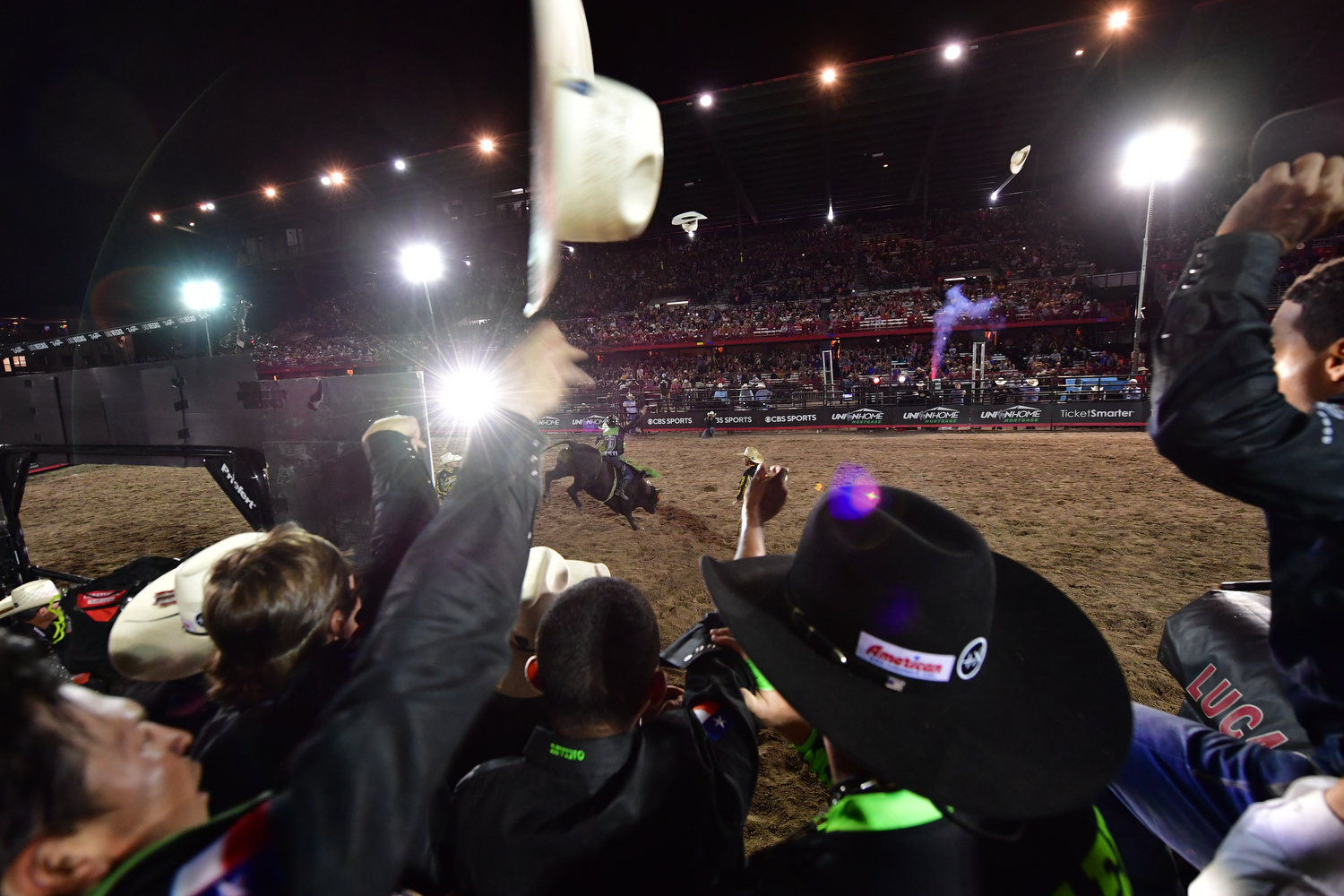 CHEYENNE, Wy. – The Missouri Thunder made history Monday night, shutting out the Ariat Texas Rattlers to win the first-ever game of the PBR (Professional Bull Riders) Team Series 89.25-0. As the game got underway, the intensity was on full display. Andrew Alvidrez (Seminole, Texas) was first out for the Missouri Thunder, and Cody Coverchuk (Meadow Lake, Saskatchewan, Canada) prepared to be the first Ariat Texas Rattlers rider to nod his head in regular-season competition. While Alvidrez was dealt a swift 4.73-second buckoff by Light’s Out (Jane Clark/Gene Owen), Coverchuk’s out with Sugar Boom Boom (Cornwell Bucking Bulls/Circle G) was not as clear. Despite seemingly making the 8, the clock was stopped at the 3.16-second mark for an apparent slap, which stood upon review. Thunder free agent Adriano Salgado (Batatais, Brazil) was quick to change the 0-0 scoreboard. Matched up with hard-bucking American Gangster (Jane Clark/Gene Owen), Salgado reached the requisite 8, awarded an 89.25-point score as the raucous Cheyenne Frontier Days crowd erupted in cheer. The Rattlers’ Cody Jesus (Window Rock, Arizona) was unable to answer, bested by Big Wave (Lone Star/Outlaw/Maynes/D&H Cattle Co.) in a heartbreaking 6.27 seconds.

After both Cody Teel (College Station, Texas) and Clayton Sellars (Fruitland Park, Florida) for the Thunder and Brady Fielder (Clermont, Queensland, Australia) and Ednelio Almeida (Cacoal, Brazl) for the Rattlers failed to make the 8, the fate of the game came down to two riders – Thunder first-round draft pick Colten Fritzlan (Rifle, Colorado) and newly minted Rattlers free agent Braidy Randolph (Jonestown, Pennsylvania). Fritzlan was unable to clinch the win for his team early, bucked off by Shake & Bake (Ty Rinaldo TZ Bucking Bulls) in 3.55 seconds. As a result, the fate of the game rested in the hands of Randolph, making his PBR debut. The young gun, however, was unable to rise to the occasion, brought down early by Moonlight Party (Jane Clark/Gene Owen) in 1.69 seconds. As the action continues Tuesday, July 26, the Missouri Thunder will look to continue their momentum against the Nashville Stampede, while the Ariat Texas Rattlers will attempt to rebound when they face the Kansas City Outlaws.

CBS Sports Network will televise all the action from the second day of action for the PBR Team Series season debut in Cheyenne, Wyoming, LIVE with coverage beginning at 10:00 p.m. ET on Tuesday, July 26. CBS Sports will also air a one-hour highlight show from the season-launch PBR Team Series event on Sunday, July 31 at 1:00 p.m. ET.

PBR RidePass on PlutoTV will offer replays of all the PBR Team Series action from Cheyenne, Wyoming. Check https://pluto.tv/en/live-tv/pbr-ridepass for the latest programming schedule.

Here are the current Team standings for the week after the opening day of competition for the PBR Team Series: Cheyenne regular season event:

Here are the game matchups for the second day of action for the PBR Team Series: Cheyenne regular season event on Tuesday, July 26:

ENGAGE WITH THE RATTLERS:

ABOUT THE ARIAT TEXAS RATTLERS:

Under the leadership of General Manager, Mark George the Texas Rattlers, coached by PBR co-founder Cody Lambert, are owned by the Fisher Family, founders of Gap Inc., one of the founding team owners for the launch of the PBR Team Series. Their team will be based in Fort Worth, Texas, competing at Dickies Arena for their inaugural Rattlers Days homestand on October 7-9, the 9th event of the league’s 10-event 2022 PBR Team Series regular season. For decades, the Fisher Family have made investments in footwear and apparel, real estate, and timberland and forest products, and education and sports, including ownership of the Oakland Athletics and San Jose Earthquakes. Through its Ariat brand, the official boot of PBR, the Fisher family have been longtime supporters of PBR. The family is actively involved with a number of philanthropic causes, including SFMOMA, The KIPP Foundation, and UCSF.