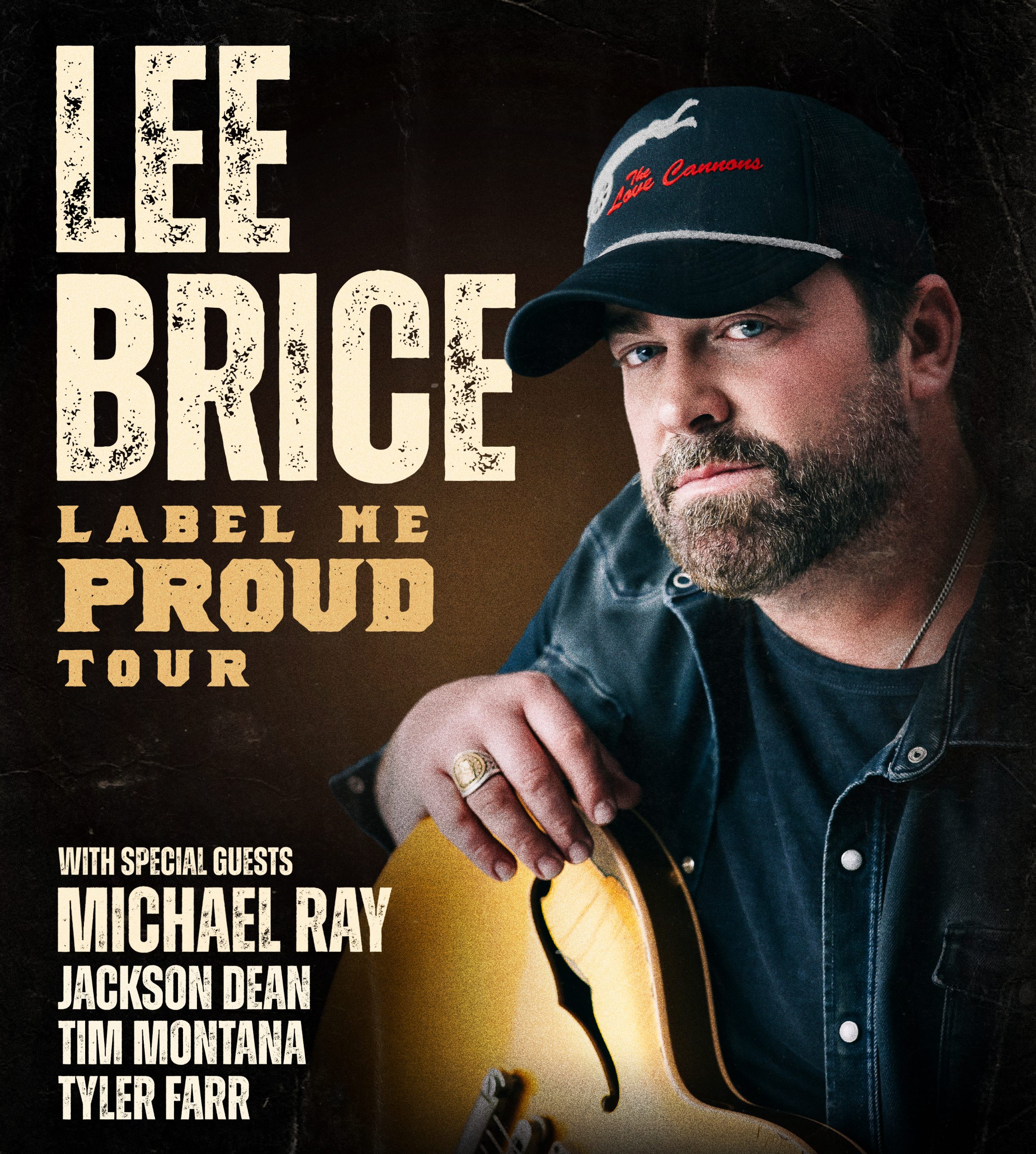 (March 28, 2022 – Nashville, TN) One of Country music’s biggest names and Grammy nominated artist, Lee Brice, has announced he will be headlining his highly awaited Label Me Proud Tour produced by Live Nation. Kicking off this June, Brice will bring his “Soul” to 23 markets, performing for all the fans who have been clamoring for live music again the way only Brice can do it – by throwing one hell of a party!

“Man, it feels good to announce this tour! It’s been a while since we’ve all been back out on the road and to have my good buddies, Michael Ray and Jackson Dean, join me is a blessing,” says Brice. “Can’t wait to be back in all these places I’ve grown to love over the years with fans that are bar none the best ones out there! See y’all this summer!”

Since the release of Brice’s latest album, Hey World, the CMA and ACM Award winner has landed three consecutive #1 hits including “I Hope You’re Happy Now” with Carly Pearce, “One of Them Girls,” and “Memory I Don’t Mess With” – bringing him to an impressive nine #1 career singles. His masterful storytelling and way of bringing a song to life is on full display with his history making track “One of Them Girls” for which he swept the 2021 ASCAP, BMI and SESAC Awards as “Country Song of The Year” – the first time one song took all three awards in the same year.

Supporting Brice out on the road this summer is his good friend and artist, Michael Ray, who is coming off his RIAA Platinum-certified multi-week No. 1, “Whiskey and Rain,” and whose current single “Holy Water” continues to climb the Country charts. Also hitting the road with Brice and Ray during the Label Me Proud Tour is Big Machine recording artist, Jackson Dean, whose stomping first single at Country radio, “Don’t Come Lookin,” is making a massive impact for the rising Country star. For select dates, Tyler Farr and Tim Montana will also be making appearances during the Label Me Proud Tour. Please see the tour schedule for additional information on each date’s supporting acts.

Pre-sale tickets for the Label Me Proud Tour, including special VIP Experience packages where fans will have the chance to meet Brice and Ray, are available through Lee Brice’s fan club on Tuesday, March 29th at 10:00am (local time).

Public on-sale for the Label Me Proud Tour available Friday, April 1st at 10:00am (local time) at LeeBrice.com and MichaelRayMusic.com.

When Curb Records recording artist, Lee Brice, isn’t selling out arenas, writing and recording songs, or building new brands like American Born whiskey, you’ll find the family man with his wife Sara, two young boys, and daughter. Meanwhile, with over 3 billion on-demand streams, and over 3.6 billion spins on Pandora, Brice continues to enjoy massive success at country radio, digital streaming services, and on the road. He recently reached #1 at Country Radio with “Memory I Don’t Mess With,” which consecutively follows three prior #1s: ASCAP’s 2021 Country Song of the Year “One of Them Girls,” “I Hope You’re Happy Now” with Carly Pearce, and “Rumor,” which was nominated in the category Single of The Year at the 55th Annual ACM Awards. One of the most-played country artists of all time on Pandora, he was the second country artist behind Keith Urban to receive the Pandora Billionaire plaque. Lee is also a GRAMMY nominee, a CMA and ACM award winner, and he’s taken nine radio singles to Number One: “A Woman Like You,” “Hard to Love,” “I Drive Your Truck,” “I Don’t Dance,” “Drinking Class,” “Rumor,” “I Hope You’re Happy Now,” “One of Them Girls,” and “Memory I Don’t Mess With.” Garth Brooks, Jason Aldean, Kenny Chesney and others have recorded his songs, and he’s performed on numerous TV shows, including NBC’s Today, ABC’s The Bachelor, NBC’s The Voice and FOX’s Miss USA 2018. Lee performed as part of the Library of Congress Gershwin Prize for Popular Song honoring Garth Brooks, aired on PBS March of 2020. At the 54th Annual CMA Awards, Lee took home the prize for Musical Event of the Year for his song with Carly Pearce, “I Hope You’re Happy Now.” At the 56th ACM Awards, “I Hope You’re Happy Now” won Single of the Year and Music Event of the Year, and Lee and Carly Pearce performed the song live. Lee’s latest album, Hey World, features new radio single “Soul.”