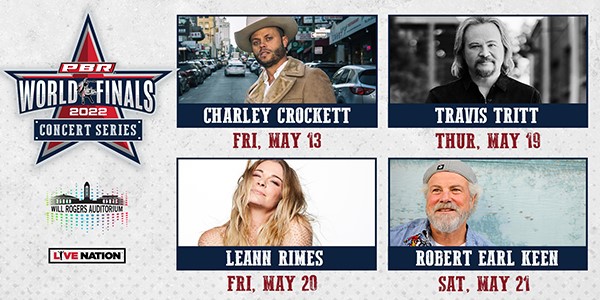 FORT WORTH, Tex. (March 15, 2022) – Ahead of the first-ever PBR (Professional Bull Riders) World Finals in Fort Worth, Texas, the organization in partnership with Live Nation and Trail Drive Management today announced the blockbuster lineup for the PBR World Finals Concert Series at Will Rogers Auditorium.

GRAMMY-award winning artists Travis Tritt and LeAnn Rimes, along with Robert Earl Keen, who is amidst his farewell tour, will join the lineup alongside the already announced Charley Crockett, scheduled to perform May 13-21.

The 2022 PBR World Finals Concert Series will begin on May 13 with a performance by Crockett, followed by Tritt on May 19, Rimes on May 20 and Keen on May 21.

Tickets to all four concerts for the 2022 PBR World Finals Concert series go on-sale Friday, March 18 and can be purchased at Ticketmaster.com.

PBR World Championship Race Intensifies as World No. 4 Kyler Oliver Wins Round 1 of Unleash The Beast Event in Kansas City