COLE SWINDELL STAYS AT NO. 1 FOR FOURTH CONSECUTIVE WEEK WITH "SHE HAD ME AT HEADS CAROLINA" 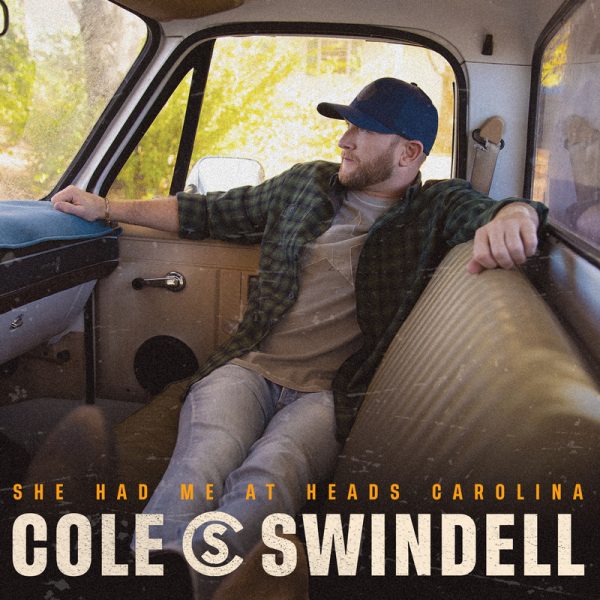 NASHVILLE, Tenn. – (October 3, 2022) –Cole Swindell’s fastest-rising single to date, “She Had Me At Heads Carolina” stays at the top of the Billboard country airplay chart for his fourth consecutive week, making him the only artist in 2022 to have a four-week consecutive No. 1 single. “She Had Me At Heads Carolina” also reaches the top of the chart this week on the Mediabase/Country Aircheck chart. An acoustic version of the song available today! Get it HERE.

“I continue to be blown away and humbled by the response to this song,”

“I continue to be blown away and humbled by the response to this song,” said Swindell. “I knew it was a special song when we wrote it and I knew that it could be a big song, but to now see it happening because of the support of the fans and radio, has just meant so much to me. Thank you.”

Stereotype, following “Single Saturday Night” and “Never Say Never” (with Lainey Wilson), and has been a Top 10 most streamed country song for the past 14 consecutive weeks. Additionally, “She Had Me At Heads Carolina,” Swindell’s 12th career No. 1, has nearly 200 million global streams to date with the largest airplay audience for a country No. 1 this year.

Swindell is nominated for two CMA Award nominations for Musical Event of the Year and Music Video of the Year with Lainey Wilson for his multi-week No. 1 duet single “Never Say Never.” “Never Say Never” was previously his fastest-rising single to date before “She Had Me At Heads Carolina” hit No. 1 on the Billboard country singles chart last week. The “The 56th Annual CMA Awards,” will air LIVE from Nashville Wednesday, Nov. 9 (8:00 – 11:00 PM/EST) on ABC.

The 12-time chart-topper launched his headlining Back Down To The Bar Tour with Ashley Cooke and Dylan Marlowe heads to the southwest this weekend with shows in Grand Junction, CO and Prescott, AZ. The tour already boasts several sold-out shows, including his first headlining date at the Ryman Auditorium in Nashville, TN on November 3, prompting a second show being added on November 2. For tour dates and to purchase tickets go to www.ColeSwindell.com.

COLE SWINDELL’S BACK DOWN TO THE BAR TOUR

Multi-Platinum selling superstar Cole Swindell released his new album Stereotype and already has charted three back-to-back multi-week No. 1 hits including “Single Saturday Night,” and most recently his Gold-certified smash single “Never Say Never,” a duet with his friend and BBR Music Group’s rising star Lainey Wilson and his single “She Had Me At Heads Carolina,” which has become his fastest-rising single to date hitting the top 10 in just seven weeks and No. 1 in just 12 weeks. In the seven years since his debut on Warner Music Nashville, Swindell has racked up an impressive 12 No. 1 singles as an artist – 13 No. 1’s as a songwriter – nine certified Platinum singles (four singles at 2x Platinum), a Platinum-certified debut album (Cole Swindell) and a Gold-certified sophomore album (You Should Be Here). The Georgia hitmaker has over 5 BILLION global career streams. His massive, GRAMMY-nominated hit “Break Up In The End” was named the NSAI Song of the Year (2019).

Swindell has played on some of the biggest stages in the world, including making history being the first-ever live radio and TV broadcast from the 57th floor terrace of 4 World Trade Center. He has played high-profile national television performances on NBC’s Citi Concert Series on TODAY, ABC’s Good Morning America, The Ellen Degeneres Show, Tonight Show starring Jimmy Fallon, Jimmy Kimmel Live!, ABC’s CMA Fest specials, CMA and ACM Awards, MLB Network, NASCAR and Sports Illustrated among others. The entertainer has toured with some of the biggest names in country music, including Luke Bryan, Kenny Chesney, Jason Aldean, Thomas Rhett, Florida Georgia Line and Dierks Bentley. He officially became a headliner on his own in 2018 with his Reason To Drink Tours and his subsequent headlining Down To Earth Tour, most recently his Down To The Bar Tour and will be back out on the road in the fall headlining his Back Down To The Bar Tour with Ashley Cooke and Dylan Marlowe.

WYNONNA JUDD KICKS OFF THE JUDDS: THE FINAL TOUR WITH EMOTIONAL FIRST WEEKEND