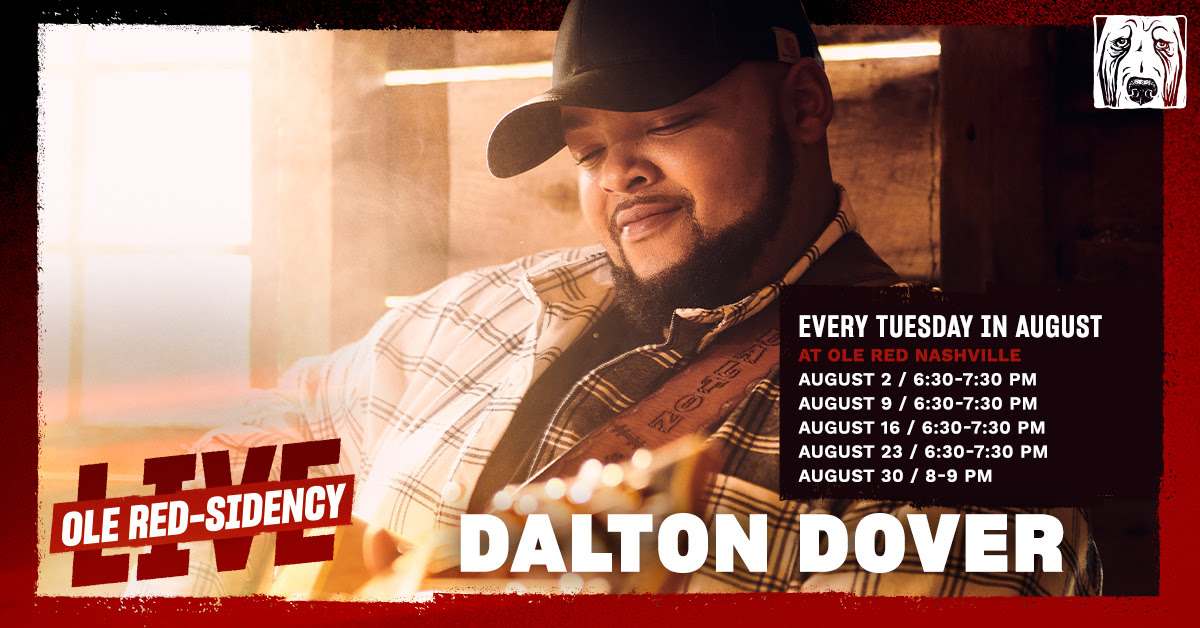 Last month, the 23-year-old achieved yet another marker in a series of milestones, earning a nomination for MusicRow’s Discovery Artist of the Year, following the release of “Hear About A Girl.”

Written by Adam Craig, Michael Carter and Jim McCormick, and produced by Matt McV, “Hear About A Girl” showcases the Georgia-native’s dynamic vocals, with MusicRow sharing the song is “beautifully done,” giving him “the space to stretch his range and volume,” while also praising, “We’re the presence of a master country talent when this man sings. Make him a star. Now.”

Released via industry vet Jim Catino’s Droptine Recordings, “Hear About a Girl” is the follow-up to Dover’s debut songs “You Got A Small Town” and “Baby I Am,” garnering critical acclaim from Billboard, sharing “he infuses his brand of country with a bluesy intensity,” and earning a spotlight as February’s Country Rookie of the Month. He was also named Country Now “Country Next” artist, sharing “Dover’s country music career may be just beginning, but his star is quickly catching fire.”

About Dalton Dover
Twenty-three-year-old Dalton Dover first started singing at church as a kid, winning his fifth-grade school talent show performing Justin Bieber’s “Baby.” In that moment Dover’s love of performing was born. By the age of 16 he had picked up a guitar and started teaching himself to play, yet it was his grandfather who turned him on to country music and artists such as Keith Whitley, Rhett Akins, Joe Diffie and Steve Wariner. Enamored with the honesty and storytelling found in country music, Whitley’s “Don’t Close Your Eyes” was the first song Dover taught himself to play on guitar. Performances at local bars soon followed along with sharing covers of some of his favorite songs on TikTok. It was there he caught the ear of producer Matt McV and A&R Veteran and founder of Droptine Recordings, Jim Catino, who quickly signed Dover.

Married to his high school sweetheart, Faith, the two have lived in the same rural Georgia small town, population 1,200, all their lives, important for the Dovers to give their two young children, Taylor and Alyiah, the same idyllic childhood they had growing up — the life one finds in a small town. And it’s that pace and familiarity he enjoys so much that he sings about on his debut track “You Got a Small Town.” Produced by McV and available now on Droptine, “You Got A Small Town” earned praise from Billboard, sharing “the song’s tale is lifted by blazing guitar lines and Dover’s soaring vocals, transforming the track into a smoky love letter to small towns” with MusicRow calling it “an impressive debut, reminiscent of the titanic Luke Combs.” With this debut track and follow-up “Baby I Am” earning notable playlisting, Dover was named a Spotify Hot Country 2022 Artist to Watch. His latest release “Hear About A Girl” is available now. Dover is set to release new music throughout the remainder of 2022. For the latest follow along on Instagram, TikTok, Twitter and Facebook.