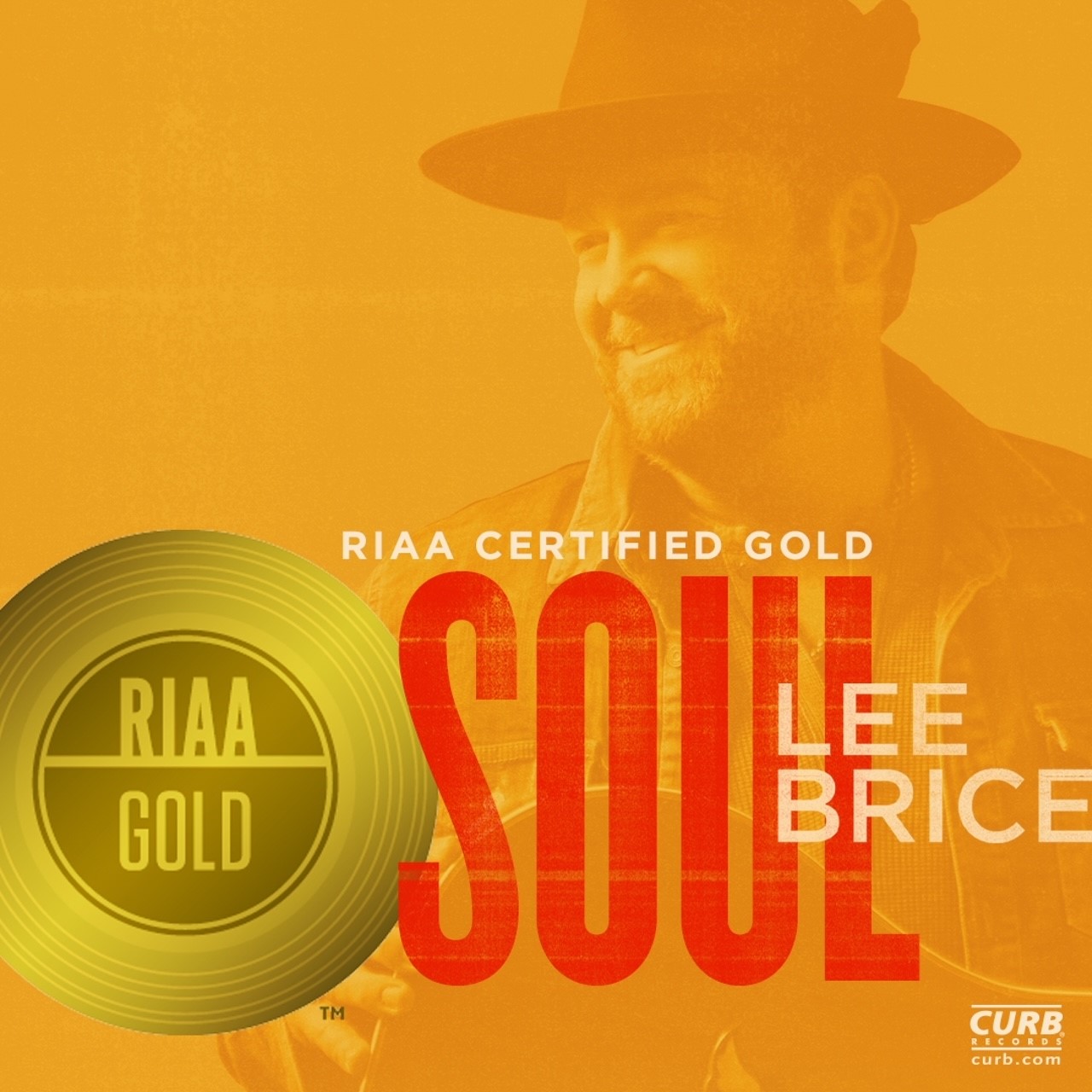 “I am completely bowled over time and time again by how amazing the fans are! They keep my music playing and keep showing up to the shows – this is all because of them. I’m truly honored and feel like one lucky son-of-a-gun to get to do what I love.”

“Congratulations to Lee and his whole team on this incredible achievement. Gold & Platinum certifications are earned by the best of the best and reflect the deepest connection between artists and fans. With over 25 million certifications, it’s clear the bond between Lee and his fans has never been stronger!”— Jackie Jones, VP, Artist and Industry Relations at RIAA

“Soul” – the #1 most added single at Country Radio upon impact – is off Brice’s highly acclaimed album, Hey World. A product of the pandemic, Hey World, is an expression of Lee’s desire to quiet the frustrations and uncertainties that the past few years have put us all through and find some healing in his music. The album has amassed 1 Billion streams and features three #1 singles for Brice – “I Hope You’re Happy Now” with Carly Pearce, “One of Them Girls,” and “Memory I Don’t Mess With.”

Recently, Brice reached another incredible milestone by becoming one of the very few Country artists to amass over 1 Billion streams on Apple Music Worldwide, brining his overall digital streaming imprint to over 5 Billion on all platforms.

Currently, Lee is out on his headlining Label Me Proud Tour. The 23-market tour, which kicked-off earlier this summer, with support from Country acts Michael Ray and Jackson Dean. For select shows, Tyler Farr and Tim Montana will be making appearances during the tour. Tickets for the Label Me Proud Tour can be found here.

When Curb Records recording artist, Lee Brice, isn’t selling out arenas, writing and recording songs, or building new brands like American Born whiskey, you’ll find the family man with his wife Sara, two young boys, and daughter. Meanwhile, with over 5.2 billion streams, and over 3.6 billion spins on Pandora, Brice continues to enjoy massive success at country radio, digital streaming services, and on the road. He recently reached #1 at Country Radio with “Memory I Don’t Mess With,” which consecutively follows three prior #1s: SESAC’s, ASCAP’s, and BMI’s 2021 Country Song of the Year, “One of Them Girls;” ACM and CMA Award-winning, “I Hope You’re Happy Now” with Carly Pearce; and “Rumor,” which was nominated in the category, Single of The Year, at the 55th Annual ACM Awards. One of the most-played country artists of all time on Pandora, he was the second country artist behind Keith Urban to receive the Pandora Billionaire plaque. Lee is also a GRAMMY nominee, a CMA and ACM Award winner, and he’s taken nine radio singles to Number One: “A Woman Like You,” “Hard to Love,” “I Drive Your Truck,” “I Don’t Dance,” “Drinking Class,” “Rumor,” “I Hope You’re Happy Now,” “One of Them Girls,” and “Memory I Don’t Mess With.” Garth Brooks, Jason Aldean, Kenny Chesney and others have recorded his songs, and he’s performed on numerous TV shows, including NBC’s Today, ABC’s The Bachelor, NBC’s The Voice and FOX’s Miss USA 2018. Lee performed as part of the Library of Congress Gershwin Prize for Popular Song honoring Garth Brooks, aired on PBS March of 2020. At the 54th Annual CMA Awards, Lee took home the prize for Musical Event of the Year for his song with Carly Pearce, “I Hope You’re Happy Now.” At the 56th ACM Awards, “I Hope You’re Happy Now” won Single of the Year and Music Event of the Year, and Lee and Carly Pearce performed the song live. Lee’s latest album, Hey World, features current radio single “Soul.”

Celebrating 58 years in business, Curb Records is one of the world’s leading independent music companies. Owned and operated by Mike Curb since 1964, Curb Records has achieved 435 number one records, over 1,500 Top Ten records and charted over 4,500 total records. With over a half century in operation, Curb Records has been influential in the careers of some of the biggest names in music, including: Tim McGraw, Hank Williams, Jr., Rodney Atkins, Lee Brice, LeAnn Rimes, The Judds, Dylan Scott, Sawyer Brown, Wynonna, Lyle Lovett, Jo Dee Messina, Hal Ketchum and Desert Rose Band, among many others. Today’s roster includes some of the top names across multiple genres of music. For more information, visit www.curb.com.

“ACADEMY OF COUNTRY MUSIC HONORS™” MAKES ITS DEBUT ON FOX FOR THE FIRST TIME ON TUESDAY, SEPTEMBER 13