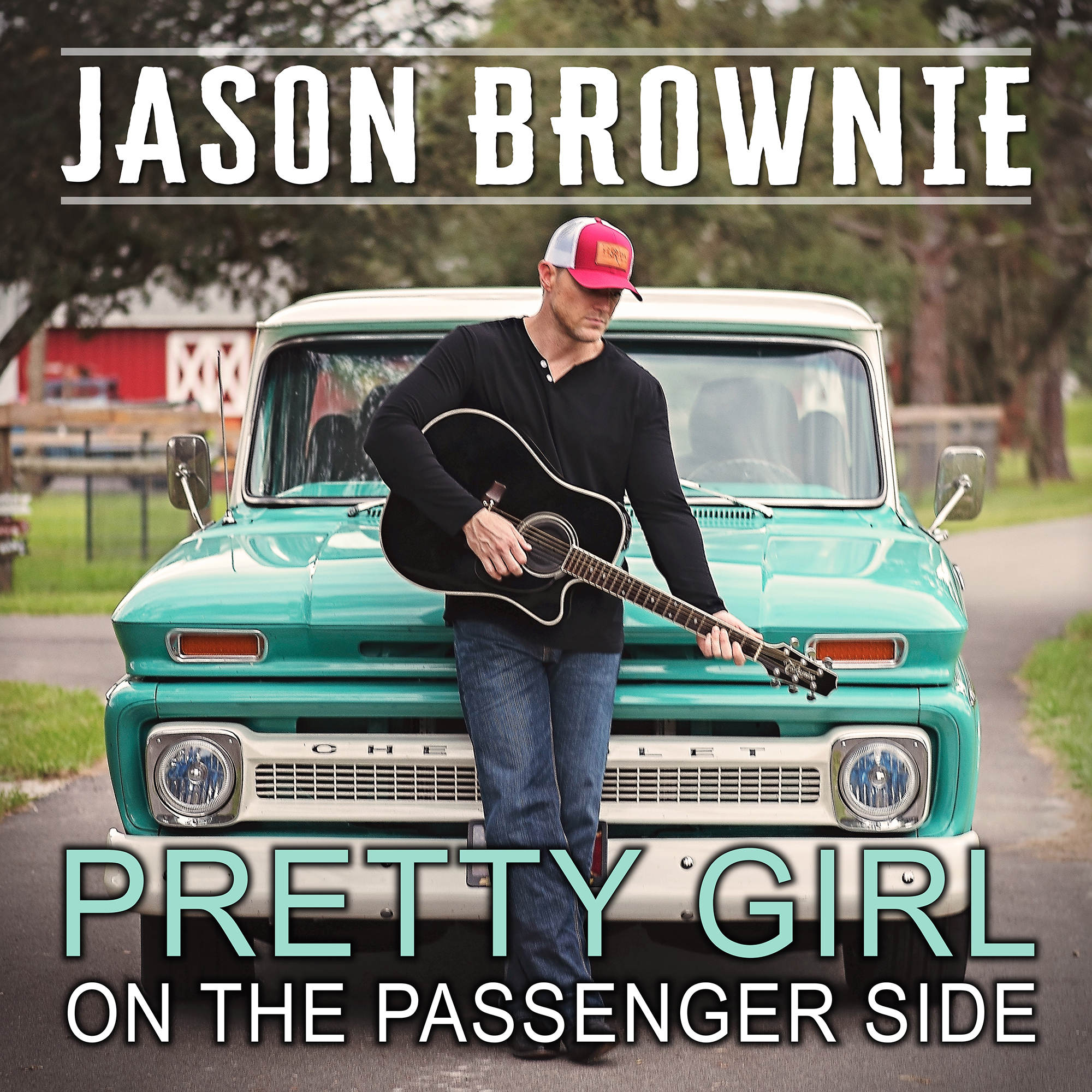 NASHVILLE, TENN. – (May 6, 2022) – Florida singer/songwriter, Jason Brownie, announced today the release of his debut single, “Pretty Girl On The Passenger Side.” This upbeat, country driving tune is just what the nicer weather ordered. Solo-penned by Jason Brownie and produced by Jeff Bates, the single was recorded at Funhouse Studio Nashville, with vocals recorded at Bateshop Studio in Murfreesboro, Tennessee. Rodney Ingle engineered the new music at Funhouse Studio and Jeff Bates served as engineer at Bateshop, as well as handled the editing, mixing and mastering. Download and stream the new music on all digital music platforms including Spotify, Apple Music/iTunes, Amazon Music, Pandora, YouTube Music and more at prettygirlonthepass.

“This was the very first song we tracked in Nashville. It was such an amazing and humbling experience being in a room with some of the best session players in Nashville, who were there to play on my songs! This song in particular is just a fun, catchy song and I am very excited with the way it turned out. It’s easy to sing along to and so much fun to play live!” relayed Jason Brownie.

“Pretty Girl on the Passenger Side”‘ is a feel-good and full of energy Country tune that speaks to the happier side of life,” shares CEO of Clearwater Records-Robert Gomes. “The Clearwater Records family is excited to have Jason as one of the new artists on our label roster and we see a very bright future for his career in music.”

“Pretty Girl on the Passenger Side” is a great driving song! There are certain songs that just make a person want to crank the radio up and cruise down the highway, such as the classic “Take It Easy” by the Eagles and Tom Cochrane’s “Life Is A Highway.” Jason wanted this song to have a vibe similar to that. He wrote the song a couple of years ago, but struggled with the chorus. He had that hook in his head and knew it was catchy, but the lyrics actually went through several variations before he got it right. The song’s bridge lyrics were the chorus at one point. The line ‘rolling down the road of this beautiful life’ was actually the last lyrics written, and it made the song come together and help paint the picture he was trying to convey. Fans always tell him they cannot get that song out of their head.

About Jason Brownie:
Country artist Jason Brownie has a musical style that can be summed up in three words. American. Country. Rock. An especially grounded artist who comes from the “boondocks” of a small southwest Florida town and says his roots lie deep in his love for God and country. Influenced heavily by both country and rock and roll, Jason is passionate about both genres he grew up listening to and his own music certainly reflects that.
A music journey different than most, he chose a path of not relocating to Nashville after graduating high school and instead stayed rooted in his hometown perfecting his craft and like many others, almost gave up on music completely a couple of times. Jason is the perfect example of the American Dream and through hard work and being resilient has found himself immersed in his music and achieving those dreams sparked many years ago. The hard work has paid off, with Jason recently inking a record deal with Clearwater Records. His first single, “Pretty Girl on the Passenger Side” is set to release on May 6, 2022, with the song’s music video following soon. Calling Nashville his new “home away from home,” Jason spent time in the studio tracking vocals with country artist Jeff Bates.

A native of Punta Gorda, Florida, Jason holds a bachelor’s degree in Criminal Justice from Hodges University and is currently working toward his Master’s in Cybercrime from the University of South Florida. In addition, he also holds a Florida Real Estate license. Jason comes from a long line of both military and first responders. A third-generation law enforcement officer, he has spent years serving and protecting his community. He’s also been busy raising his daughter and writing and playing music relentlessly on the local music scene.

An industrious person by nature, enjoys spending time with family, especially being a “girl dad,” boating, weightlifting, fishing, boxing, basketball, billiards and music of course. When asked who his favorite musician is, his quick answer is there are just too many to name. He has a knack for collecting guitars and cowboy boots and states his influences come from many different artists and genres. Ask Jason about football and he will excitedly tell you he’s a huge Tampa Bay Buccaneers fan. Sports aside, his overall life hero is his own grandfather.

His goals for the future are to continue playing music, pen a hit record and have a notable artist record one of his songs.