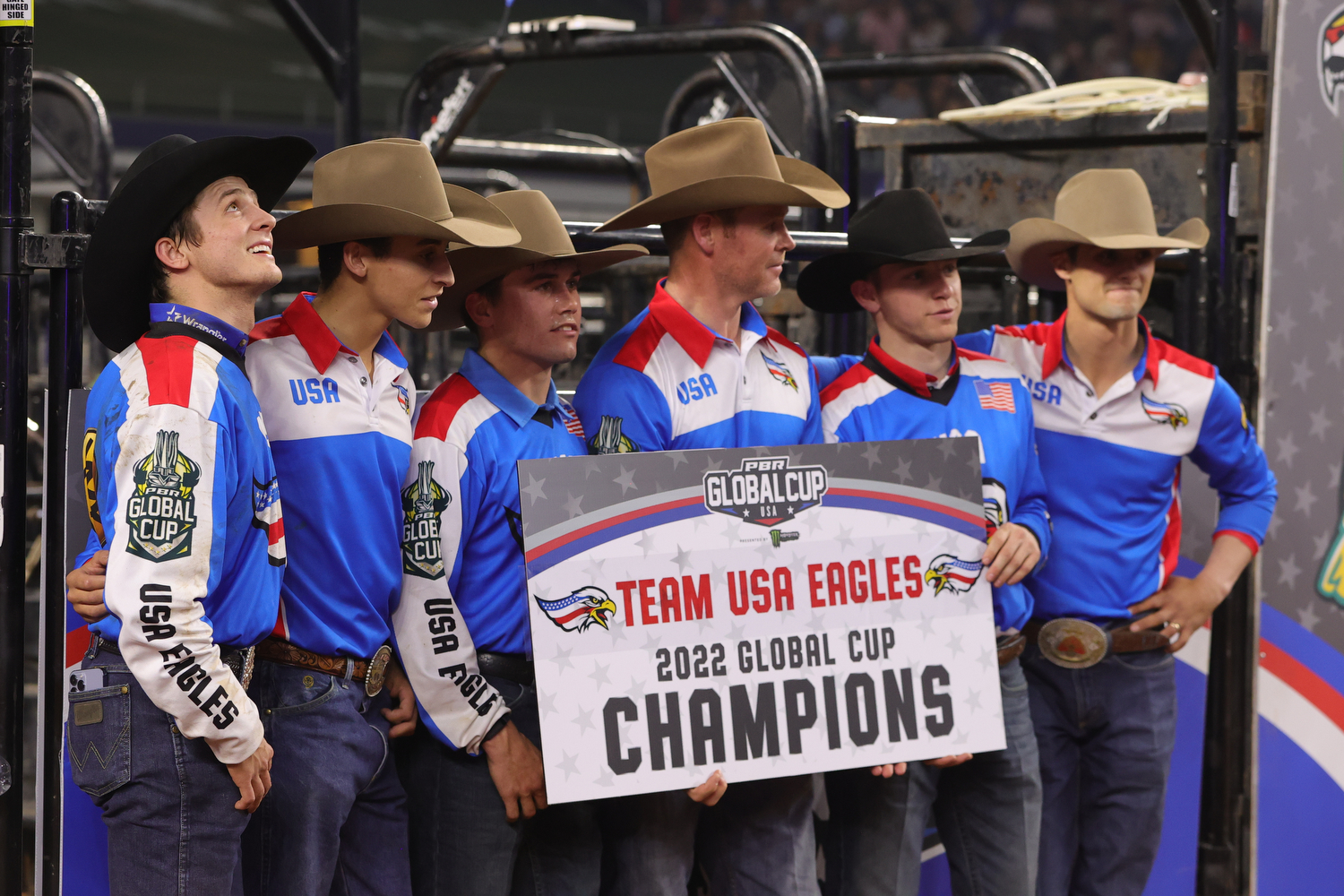 “I love everything about this sport,”

“I love everything about this sport,” Team USA Eagles Coach Ross Coleman (Molalla, Oregon) said moments after the win. “I love watching these young men. They’re role models and good cowboys, and they get the job done.”

The Eagles were led by Captain Daylon Swearingen (Piffard, New York), who capitalized on his last-minute selection to team as he replaced an injured Boudreaux Campbell (Crockett, Texas).

“We’re all pushing each other and supporting each other,” Swearingen added as he readied to accept his glittering buckle. “I feel like we’re all doing the job we came in to do. We just let it happen.”

First to put points on the board for the red, white and blue, Swearingen gave Team USA Eagles an early lead when he rode Body Count (Bob & Jeri Adams/BS Cattle Co.) for a commanding 90.5 points.

While Team USA Eagles may have been perfect through the opening round, Team Brazil remained hot on their spurs with its own flawless 3-for-3 effort.

As the action continued and anticipation built amongst the raucous crowd inside the home of the NFL’s Dallas Cowboys, Team USA Eagles continued to shine.

Going 2-for-3 in Round 2, the host nation expanded its lead atop the standings to a full bull, positioned 92.25 points out front as each country readied for the bonus round and one final bull.

On the Team Brazil roster, Barbosa was the lone contender to convert and keep the South American nation’s hopes alive. He conquered Midnight Flyer (Jane Clark/Gene Owen) to earn an 86.75-point score.

The title of 2022 PBR Global Cup USA Champion then came down to a battle between Team USA Eagles Captain Swearingen and Team Brazil Captain Jose Vitor Leme (Ribas do Rio Pardo, Brazil), who was bucked off by Dixieland Delight (Rickey West Bucking Bulls/Hatcher Porter) in an uncharacteristic 2.63 seconds earlier in the evening.

However, injury was quick to rear its head as Team Brazil attempted to make a last-minute, come-from-behind push for the title.

While attempting HomeBru (D&H Cattle Co./Buck Cattle Co.), Leme’s free hand was smashed in the chute gate. As the PBR’s Sports Medicine Team tended to him, Team Brazil was awarded a re-ride, which was subsequently presented to Pacheco with Leme unable to compete.

As Pacheco readied to ride one final time, Swearingen climbed aboard Team USA Eagles’ final draw – Diddy Wa Diddy (Cord McCoy/Bill McCarty). A familiar matchup, in 2021, the New York cowboy covered the impressive animal athlete for 90.75 points en route to a third-place result on the elite Unleash The Beast in Fort Worth.

Replicating past success, Swearingen was again a picture of perfection aboard Diddy Wa Diddy. He made the 8 for 91.5 points, his second 90-point ride of the night, clinching the 2022 PBR Global Cup USA Championship for Team USA Eagles.

Team USA Eagles, who went a near-perfect 6-for-7 for 527 points, exited AT&T Stadium having earned $200,000. Swearingen also earned $15,000 for being the top-performing rider, and Kasel collected an added $7,500 for registering the high-marked ride.

Team USA Eagles is now the winningest team in PBR Global Cup history having now won the event three times. The Eagles first won the inaugural event in Edmonton, Alberta, Canada, in 2017, and have won the most recent two iterations of the global tournament in Texas in 2020 and 2022.

While Pacheco capped Team Brazil’s showing with a 90.5-point ride on Medicine Man (TNT Bucking Bulls/Hart Cattle Co.), it was not enough to earn the win.

After being shut out through the opening rounds of action, Alvaro Alvarez Aguilar (La Punta Lagos Moreno Jal, Mexico) was the nation’s savior. As the last man out for Team Mexico in the bonus round, he converted under pressure, riding Outlaw (Cord McCoy/Big Sky Bulls, LLC) for 89.25 points.

In his first event back since sustaining a knee injury in mid-January, Radford rode Born To Sin (Martinez Bucking Bulls, LLC) for 84 points, earning Team Canada a $32,500 payday.

Rounding out the leaderboard in sixth was Team USA Wolves.

As the legendary Western sports weekend continues, AT&T Stadium will host The American Rodeo tomorrow, Sunday, March 6. The richest single-day event in Western sports will start at 12 p.m. CST and match professional rodeo champions and everyday, hardworking cowboys and cowgirls in a winner-take-all showdown meant to crown the finest talent the world has to offer.