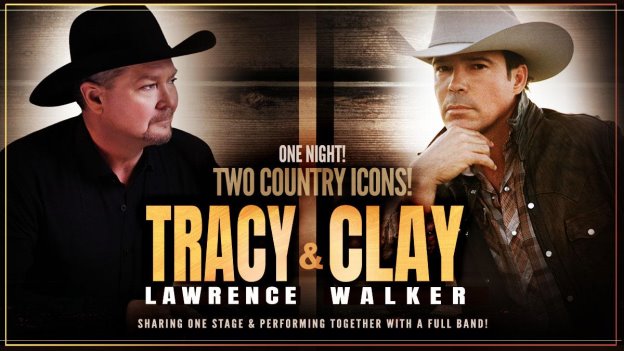 (February 9, 2022 – Nashville, TN) Tracy Lawrence and Clay Walker have been long-time tour-mates and friends, and they’ll bring their iconic shows to states across the Southeast and Midwest this spring. Kicking off Thurs., Mar. 3 at Ovens Auditorium in Charlotte, NC, the two country mainstays will share the stage together on a 10+ date co-headlining tour starting next month. Due to demand, the pair have added three new shows in El Dorado, AR (5.26), Camdentown, MO (5.27) and Wichita, KS (5.28).

Lawrence and Walker will deliver performances of new tracks while also channeling their most prolific hit-making music that has captivated fans over the years. Fans can expect a rowdy full-band set honky-tonk tunes, tender ballads and country music storytelling.

Lawrence and Walker toured together in May of 2021, and they’ve been playing shows together since the ‘90s. Hear Lawrence and Walker share a hilarious tour story from their early days on CMT’s “Probably Shouldn’t Tell You This” series, here: youtu.be/RDjC-oWP8C0

Tracy Lawrence is one of country music’s truest traditionalists who recently commemorated his 30th anniversary in the Country music industry with the release of Hindsight 2020 – a three album release that revisited some of Tracy’s biggest career hits and new material. His latest single off Hindsight 2020; Volume 3: Angelina is “Don’t Drink Whiskey” – a stirring track about life’s inevitable pitfalls and living with regret of past mistakes. His impressive catalog of timeless music has made Lawrence a mainstay in the genre selling more than THIRTEEN MILLION albums and charting EIGHTEEN #1 songs. He has garnered numerous CMA and ACM awards and nominations, as well as a Grammy nomination.

In addition to his chart-topping success, Lawrence hosts the Award-Nominated nationally syndicated radio show “Honky Tonkin’ With Tracy Lawrence,” for which he has received three ACM nominations for National On-Air Personality of the Year. The show features music from the 80’s, 90’s and 2000’s and is heard on more than 115 affiliates. Tracy is also the co-creator of STORMING HEAVEN: THE MUSICAL, a production based on the novel Storming Heaven. Tracy, along with others, helped to develop the storyline of the musical and also composed songs for the drama. He was honored by the Nashville chapter of AFP (Association of Fundraising Professionals) with “Philanthropist of The Year” for his nationally recognized annual MISSION:POSSIBLE Turkey Fry and Concert, which has raised over Half a Million Dollars for the homeless and hungry in Dallas, Louisville and Nashville, and served more than 90,000 meals. MISSION:POSSIBLE is poised to make an even larger impact in the future, as the 501 (C) (3) organization expands into more markets across the country.

Discovered in a Beaumont area bar by noted producer and head of Giant Records James Stroud (Toby Keith, Tracy Lawrence, Tim McGraw, Kenny Rogers), Clay Walker was in his early twenties when he started rattling off a string of smash hits: “Live Until I Die,” “Dreaming With My Eyes Open,” “This Woman And This Man,” “Hypnotize The Moon,” “Rumor Has It,” “Then What,” “I Can’t Sleep” and “She Won’t Be Lonely Long.”

Four platinum albums, more than 30 charted singles and 11 No. 1’s later, Texas-native Clay Walker has built a storied career blending country’s timeless themes with music-of-the-moment timeliness. Nowhere is this more apparent than on Walker’s debut Show Dog Nashville album ‘Texas To Tennessee’ (7.30). Certainly, the realities of place are as central as this comeback album’s name implies: Nashville – busily working toward the next fresh hit; Texas – moving at its inimitable and familiar pace.

Produced by Michael Knox (Jason Aldean) and chart-topping songwriter Jaron Boyer, ‘Texas To Tennessee’ delivers smooth bore country that would feel right at home on any of Walker’s four platinum CDs. It’s a modern album that nods at an earlier era in its time economy.