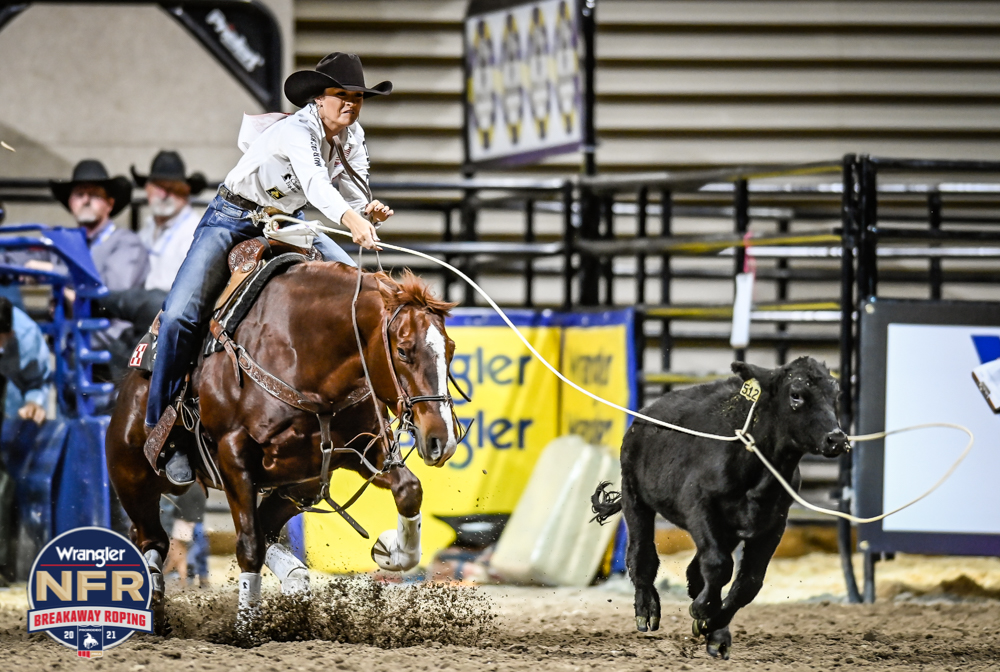 The Canadian-turned Texan has had a Cinderella season in 2021, roping her way to the top of the WPRA ProRodeo Breakaway World standings entering the second annual Wrangler National Finals Breakaway Roping (NFBR) which began December 6, 2021, at the Orleans Arena in Las Vegas. The Wrangler NFBR features the top 15 from the season competing for a $200,000 purse across ten rounds and an average.

After the first day of the Finals, Boisjoli is still on top of the standings after roping five calves in 14.4 seconds to lead the average.

Though Boisjoli came in with a lead of about $1,300 in the standings, she knew she had her work cut out for her roping against the top ropers in the country.

“I just kept telling myself it’s an even playing field and it’s a ten head average against 15 girls,” Boisjoli said. “I’m just trying to treat it like a jackpot and just knock the calves down, score good and use my horse every round.”

Boisjoli relies upon her equine partner, Onna, the 2021 Breakaway Horse of the Year.

“My horse has been really good here; she scored great, she’s running all the way to the calf,” Boisjoli said. “I can’t ask her to work any better here.”

Boisjoli’s share of the round three win marked off a box for the world leader.

“I’m so excited. I really didn’t feel like I had anything to show for the first National Finals that I made in the breakaway roping,” Boisjoli said of the 2020 Wrangler NFBR held in Arlington, Texas, where she finished eighth. “I didn’t have the Finals that I wanted to have so this year I wanted to be a lot more aggressive.

“This buckle means the world to me,” she continued.  “I’ve already made progress over last year so no matter what happens from here on out, I’m happy.”

Boisjoli is half a second ahead of Taylor Munsell in the average at the halfway point.

“That’s what I was shooting for,” Boisjoli said. “Catching every calf around the neck is the goal.”

“I’m really trying hard not to think about it [the World Championship] and just trying to go one calf at a time but I would be lying if I said I haven’t thought about it,” Boisjoli admitted. “It’s a lot more stressful this year but I wanted to put myself in a better position this year than I did last year to win a world title and I already did that.

“I feel like I already accomplished my goals this year and I just want to have fun at these Finals and whatever happens, I’m really just grateful to be here. It’s in God’s hands now.”

Sawyer Gilbert, who nipped at Boisjoli’s heels all year, is still second in the standings and is ranked third in the average. Crawford was the high money winner on day one with $12,408 earned to jump from seventh to third so Boisjoli won’t be able to rest much Monday night before the Finals concludes with the final five rounds on Tuesday afternoon.

“I barely slept last night, so I won’t be sleeping much tonight!”

The final rounds of the Wrangler NFBR will air live on The Wrangler Network beginning at 1 PM Pacific Tuesday, December 7, 2021.

About PRCA:
The Professional Rodeo Cowboys Association (PRCA), headquartered in Colorado Springs, Colo., is the oldest and biggest rodeo-sanctioning body in the world. The recognized leader in professional rodeo, the PRCA is committed to maintaining the highest standards in the industry in every area, from improving working conditions for contestants and monitoring livestock welfare to boosting entertainment value and promoting sponsors. The PRCA also proudly supports youth rodeo with educational camps and financial assistance to young standouts preparing to enter the professional ranks, as well as supporting allied organizations such as Tough Enough to Wear Pink, Miss Rodeo America, the American Quarter Horse Association and the ProRodeo Hall of Fame.