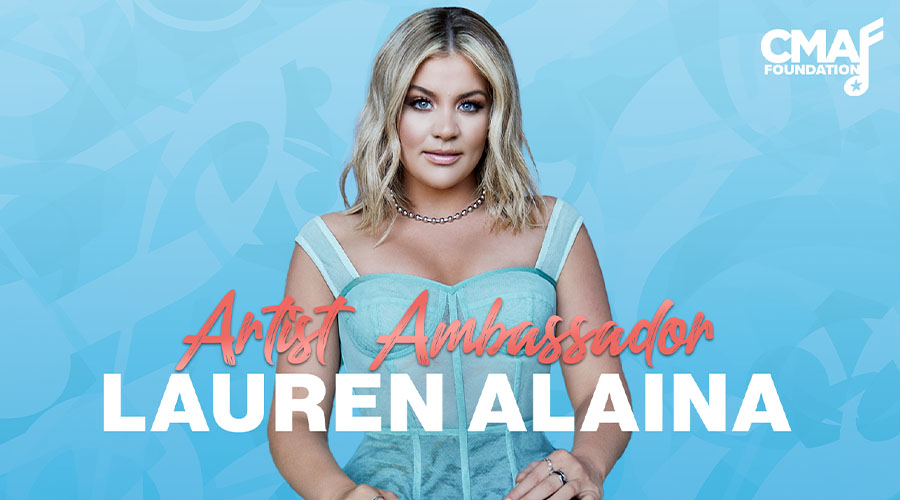 The CMA Foundation, the philanthropic arm of the Country Music Association, welcomes Lauren Alaina as the non-profit’s newest Artist Ambassador, further expanding its support and advocation for equitable music education opportunities across the U.S.

As a CMA Foundation Artist Ambassador, Alaina will participate in various events and initiatives that enhance the CMA Foundation’s mission. She sat down with ABC’s “On the Red Carpet” ahead of “The 55th Annual CMA Awards” to discuss her ambassadorship, her passion for music education and the importance behind ensuring this generation’s access to equitable music education opportunities. The full interview will air in various U.S. markets this coming weekend, Nov. 6-7, during the “On the Red Carpet: CMA Awards Countdown” preview show hosted by KABC Entertainment Reporter George Pennacchio. Check out a teaser of the interview HERE.

“We are excited to welcome Lauren Alaina to the CMA Foundation Artist Ambassador collective,” says Tiffany Kerns, CMA Foundation Executive Director. “Lauren’s passion for music and music education is so evident. She continues to use her voice in a way that magnifies the power of music, and we could not be more grateful to her for joining us to further drive our mission forward, making sure all students across the U.S. have access to participate in quality music programs.”

As a further extension of her commitment, on Monday, Nov. 22, Alaina will host a live virtual “Fansgiving,” benefitting the CMA Foundation, in celebration of her new book, Getting Good at Being You, which releases the following day. Fans can chat with Lauren and cook alongside her as she reads from her book and prepares for the holiday season. Fans are encouraged to share their funniest Thanksgiving stories before the event, and she will pick her three favorite stories and invite those fans to join her live on-screen during the event. Tickets for the event start at $10 and go on sale Friday, Nov. 5. Click HERE for tickets and more information.

“I would not be Lauren Alaina without the role music education played in my life,” says Alaina. “I’m grateful for the music programs I was in throughout my middle school and high school years. I’m honored to join the CMA Foundation in their mission to make sure all kids have the same opportunity to make music a part of their lives.”

Since its inception in 2011, the CMA Foundation has been committed to improving and sustaining music programs throughout the U.S. so all students have equitable opportunities to participate in a high-quality music education. The non-profit, which is in the midst of celebrating its 10th anniversary this year, believes music and the arts are part of a well-rounded education. During this time, the CMA Foundation has observed why music programs are not thriving, seeing first-hand the challenges educators are facing and, most importantly, the systemic issues that must be addressed in order for every child to have access to music. Committed to its vision, the CMA Foundation is working directly with school districts to identify needs, understand their challenges, build community support and develop local and national resources from partners as part of the non-profit’s systems change model.

The CMA Foundation will continue to provide unique opportunities and support for music teachers and students as more Artist Ambassadors are announced throughout the year.
About the CMA Foundation

Established in 2011 as the philanthropic arm of the Country Music Association (CMA), the CMA Foundation is committed to improving and sustaining high-quality music education programs across the United States, working to ensure every child has the opportunity to participate in music. Through strategic partnerships, professional development and grant distribution, the CMA Foundation, a nonprofit 501(c)(3), invests various resources across the national public school system, after school programs, summer camps and community outreach organizations.

Multi-Platinum-selling singer/songwriter Lauren Alaina has earned three No. 1 hit singles in just under three years with her smash “Road Less Traveled” (2017), the now 6x Platinum “What Ifs” (2018) with her childhood friend and superstar Kane Brown (his first career No. 1), and “One Beer” (2020) with friend and rising star HARDY (also his first career No. 1). Her No. 1 debuting album Sitting Pretty On Top of The World, which includes her current single “Getting Over Him” featuring Jon Pardi, as well as her recently RIAA-certified Gold-selling “Getting Good.” Alaina will release her inspirational book “Getting Good At Being You” on Tuesday, Nov. 23.

Sitting Pretty on Top of the World follows on the heels of the Georgia native’s two EPs, Getting Over Him EP and the previous Getting Good EP, which were evidence of her evolution as a songwriter. Her album Road Less Traveled was the most-streamed album of the year for a female artist in 2017 and landed on multiple “Best Of” lists including Billboard, Rolling Stone and Amazon. The album included her first No. 1 smash “Road Less Traveled” as well “Doin’ Fine,” and the inspiring, “Three.”

The Georgia native has shared the stage with superstars including Alan Jackson, Blake Shelton, Carrie Underwood, Luke Bryan, Martina McBride and Jason Aldean, sold out her own, first-ever headlining, That Girl Was Me Tour, and has performed on some of the highest-profile stages in the world including national television performances on the CMA Awards, “CMA Fest,” PBS’s “A Capitol Fourth,” “Dancing with the Stars,” “American Idol,” “TODAY,” ABC’s “Good Morning America,” “The Ellen DeGeneres Show,” “The Tonight Show Starring Jimmy Fallon,” “Jimmy Kimmel Live!,” “Macy’s Thanksgiving Day Parade,” the ACM Awards, Dallas Cowboys Thanksgiving Day halftime performance and more including a performance at the White House for President Obama for a PBS special. Read more at LaurenAlainaOfficial.com