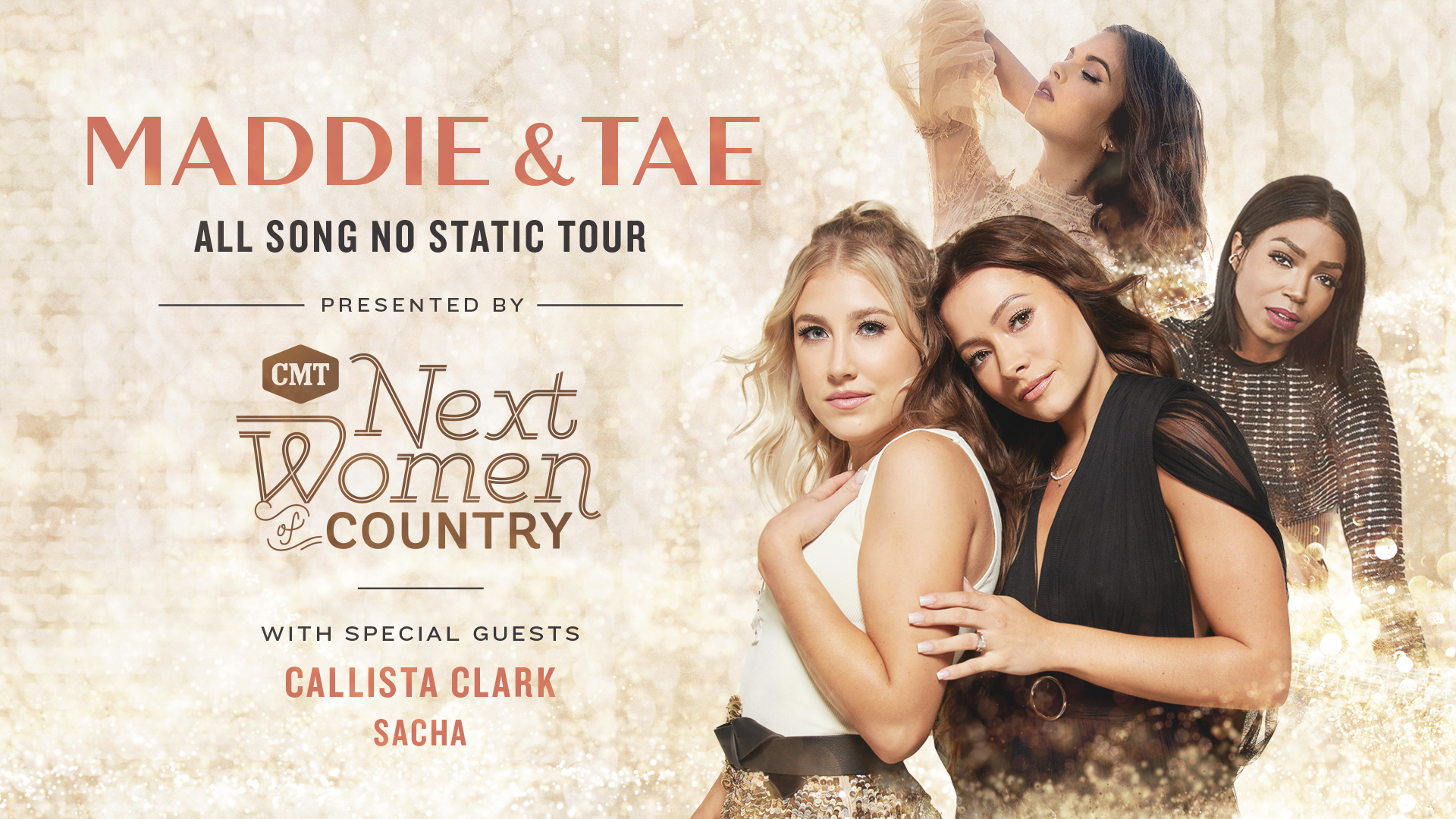 CMT and multi-Platinum-selling country duo Maddie & Tae today announced headlining dates of the 2022 “CMT Next Women of Country Tour Presents: All Song No Static Tour.” Kicking off January 6th in Oklahoma City, the CMT tour will make stops in major cities including Atlanta, Boston, Houston, Nashville and New York through February. Joining the duo will be Callista Clark and a CMT Next Women of Country inductee Sacha who will both appear at each stop of the 16-city tour.

Tickets will become available beginning this Friday, October 29th at 10AM CT at MaddieandTae.com and CMT.com.

Maddie & Tae, selected as members of the CMT’s Next Women of Country class of 2015, have launched to the forefront of country music with hit songs from “Girl In A Country Song” and “Fly” to “Friends Don’t” and their Double Platinum-certified single “Die from a Broken Heart.” Stacking 17 major awards nominations — including a Vocal Duo of the Year nod at the upcoming 55th Annual CMA Awards — Maddie & Tae are readying their next studio release that will feature their latest single “Woman You Got,” the playful “Life Ain’t Fair,” and more.

Newcomers Callista Clark and Sacha will accompany Maddie & Tae throughout the duration of the CMT tour. ​​Clark was recently named as the only Country artist in BILLBOARD’s “21 under 21” list and at just 18 years old she is making waves at Country radio with her debut single “It’s ‘Cause I Am.” Rising Canadian singer-songwriter Sacha was inducted into CMT’s prestigious Next Women of Country in 2021 and continues to build buzz on both sides of the border, most recently starting on the Gold certified TikTok hit “What The Truck” which amassed a record breaking 456,958 on-demand streams in its first week in Canada alone, and held strong as the most streamed domestic single for 14 consecutive weeks.

“We are so excited to have CMT’s Next Women of Country tour back on the road and to announce our favorite dynamic duo Maddie & Tae as headliners!” shared Leslie Fram, SVP of Music & Talent, CMT.  “I’ve loved having the opportunity to watch their careers soar since we first welcomed them into our program in 2015 and equally thrilled Callista and Sacha – two of our brightest newcomers – will have the opportunity to share the stage and be part of such an amazing tour.”

A staunch advocate for country music’s female artists, CMT launched its “Next Women of Country” campaign in 2013 in an effort to support and expose developing female talent, both signed and unsigned, in a male-dominated format. The campaign showcases emerging female artists across all CMT screens throughout the year, and in the six years since its launch, CMT has expanded the initiative to include six CMT NEXT WOMEN OF COUNTRY Tours, anchored by superstar acts including Jennifer Nettles, Martina McBride, Sara Evans, and most recently Tanya Tucker; a CMT.com digital series and more. Notable alumni of the franchise who have achieved both commercial and critical acclaim, include Kacey Musgraves, Kelsea Ballerini, Maren Morris, Mickey Guyton, Ashley McBryde and more.