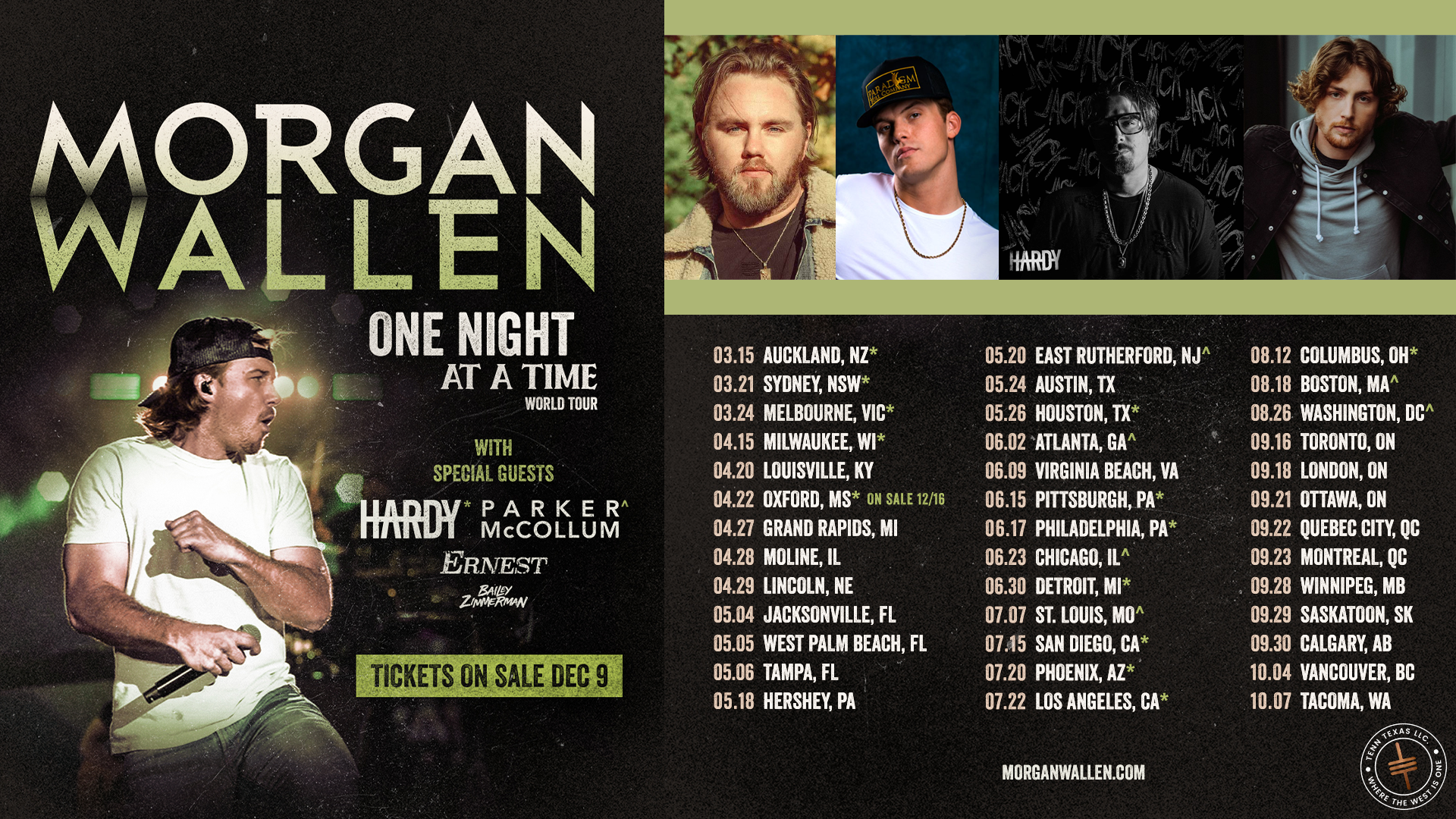 NASHVILLE, TENN. – Morgan Wallen admittedly treats his tours like an athlete approaching a new season, so when the East Tennessean wrapped his wildly successful 55-city Dangerous Tour on Oct. 8, no one expected he’d come with a line-up of more shows this soon. Yet, the ACM Milestone Award Winner and only country artist nominated for Pollstar’s Major Tour of the Year award revealed this morning he’s not only expanding the size of the venues he’s playing, he’s traveling around the globe to see his fans in 2023!

Morgan Wallen’s One Night At A Time World Tour, produced by Live Nation in North America and Frontier Touring for Australia/New Zealand, kicks off overseas March 15-24 with shows in New Zealand and Australia with HARDY before returning stateside on April 15 at Milwaukee’s American Family Field with HARDY, hitting New Jersey’s MetLife Stadium, Chicago’s Wrigley Field and Boston’s Fenway Park with Parker McCollum, before wrapping on Oct. 7 at Tacoma Dome in Washington. ERNEST and Bailey Zimmerman will support across all dates, U.S. and internationally. Thirty-nine dates in total with 17 stadiums, amphitheaters, and arenas to boot. Tickets on sale at MorganWallen.com beginning Friday, Dec. 9.

Wallen named his tour after one of three new songs dropping tonight at midnight on his One Thing At A Time – Sampler: “One Thing At A Time”; “Tennessee Fan,” paying homage to Wallen’s East Tennessee upbringing; and “Days That End In Why.” Together, these three songs serve as the first taste of what’s to come from his time in the studio and arrive on the heels of his new single at country radio, “Thought You Should Know,” cowritten with Miranda Lambert and Nicolle Galyon, currently sitting Top 20 as his latest No. 1 “You Proof” returns to the top of the charts for a rare sixth, non-consecutive week atop the Country Airplay chart.

“Man, what a year 2022 has been with the Dangerous Tour. I had the time of my life, and I cannot begin to express how grateful I am that my fans connected with the Dangerous album the way they did,” Wallen shares. “I’ve had so many people ask me if I wanted to take some time off; but the truth is – I have been writing and making so much music in my off-time because I feel as inspired as I ever have. It feels like new songs are pouring out of me, and I love that feeling. We are going to run it back next year with the One Night At A Time World Tour. Bigger venues. New countries. Bigger memories. See y’all there.”

As one of the biggest artists in the world with Dangerous continuing to notch historical chart status as Billboard’s longest running Top 10 album in history for a solo artist (eclipsing Adele’s 21 and Bruce Springsteen’s Born In The USA), the 2022 American Music Awards’ Favorite Male Artist and Favorite Country Song winner adds, “Also, I’m not quite done making this new album, so I’m going to keep making it through the holiday break and early January to chase this inspiration. I promise I won’t wait too long to reveal the album details. To hold you over, I’m dropping three new songs today as a sampler of what I’ve been working on. Can’t wait to take it one night at a time in 2023.”

Wallen’s 2022 Dangerous Tour spanned over 50 shows and broke records in 30 venues across the country during its 8-month-long run. Highlights include his historic Globe Life Field show, which became the fastest sellout in the venue’s history and surpassed attendance records previously held by artists such as Elton John and Lady Gaga, and holding fastest historical sellouts at 11 venues, while simultaneously breaking attendance records with stops at XFINITY Theatre, AmericanBank Center and Darien Lake Amphitheater.

As on his Dangerous Tour, $3 of every ticket sold for U.S. dates benefits the Morgan Wallen Foundation which funds causes close to his heart and, to-date, has supported organizations such as Greater Good Music by donating over 500,000 meals-and-counting, to Children Are People, the Salvation Army and National Museum of African American Music.

There is no official pre-sale in the U.S. for this tour, so fans are advised to only purchase through verified fans. For more information, visit www.morganwallen.com. Morgan Wallen Fan Club pre-sale for Australia and New Zealand shows begins on Wednesday, Dec. 7

$ Parker McCollum
ERNEST and Bailey Zimmerman on all dates

ABOUT MORGAN WALLEN
With over 12.3 billion on-demand streams, multi-platinum certifications and seven chart-toppers at Country radio, it’s no wonder The New Yorker dubbed Morgan Wallen “the most wanted man in country.” His critically-acclaimed, 4x platinum ACM Album of the Year Dangerous: The Double Album (Big Loud/Republic Records) — Wallen’s follow-up to his double platinum breakout If I Know Me — topped 2021’s all-genre Billboard 200 Albums year-end chart with 4.1 million units sold earning him 2022 Billboard Awards Country Male Artist top honor while continuing to notch historical chart status as Billboard’s longest running Top 10 album in history for a solo artist (eclipsing Adele’s 21 and Bruce Springsteen’s Born In The USA). Its success sparked the in-demand 55-show Dangerous Tour in 2022 that kicked off this February and wrapped in early October, with the superstar’s first headlining stadium show at Globe Life Field in Arlington, TX that saw Wallen shattering attendance records previously held by Elton John and Lady Gaga. The east Tennessean’s hit-packed set included “Up Down” (2017), “Whiskey Glasses” (2018), “Chasin’ You” (2019), “More Than My Hometown” (2020), “7 Summers” (2020, named one of Time Magazine’s Best Songs of the Year), “Sand In My Boots” (2021), and his crossover “Wasted On You.” Wallen’s first solo release of 2022, the emotional ballad “Don’t Think Jesus,” timed to Good Friday in honor of its redemptive lyrics, earned a Top 10 Billboard Hot 100 debut and landed atop Billboard Hot Country Songs chart making him the first artist to score three No.1 debuts on the chart (based on airplay, streaming and sales) since its inception. Follow up single “You Proof,” released in mid-May, became Wallen’s fastest chart climber to date, reaching No. 1 after 14 weeks and remaining at No. 1 on Billboard’s Country Airplay chart for six non-consecutive weeks. Working outside the traditional Nashville mainframe with producer Joey Moi, HITS notes, “Wallen continually colors outside the lines,” adding, in turn “he’s connected to his fans in ways unprecedented for a country star.” Having already taken home New Artist of the Year in 2020, the CMA Winner also won AMAs fan-voted Favorite Male Artist and Favorite Country Song at 2022’s awards. The east Tennessee superstar and recent ACM Milestone Award recipient shares, “Awards are awesome, but my true measure of success is my fans, who this year I got to see every single night out on the road and will continue to do so for many years to come.” Thanks to nearly 1 million of his fans, $3 for every ticket sold during his 2022 Dangerous Tour has raised nearly $3 million benefitting the Morgan Wallen Foundation which funds causes close to his heart.

ABOUT HARDY
Big Loud Records’ heavy hitter HARDY has never been just one thing. Uncaging his next chapter on January 20, 2023, HARDY will introduce the mockingbird & THE CROW, his dichotomous, 17-track sophomore album and the follow up to 2020 debut, A ROCK. HARDY is the reigning ACM Songwriter of the Year, 2022’s BMI Country Songwriter of the Year and a two-time AIMP Songwriter of the Year. One of CRS’ 2021 New Faces of Country Music and a two-time CMA Triple Play award recipient, the pride of Philadelphia, Miss. has earned his reputation as “a breakout in the making,” (HITS) and “a promising purveyor of keeping the spirit of classic heavy Southern rock alive” (American Songwriter). HARDY has written 12 No. 1 singles since 2018, including his own double platinum No. 1 single “ONE BEER” feat. Lauren Alaina + Devin Dawson, and chart-topping Dierks Bentley + BRELAND collaboration, “Beers On Me.” He’s previously toured with Thomas Rhett, Morgan Wallen, Florida Georgia Line, Jason Aldean, Cole Swindell, and more, and will embark on his own SOLD-OUT headlining Wall to Wall Tour this winter, before launching the mockingbird & THE CROW Tour in 2023.

ABOUT PARKER MCCOLLUM
Singer/songwriter and multi-instrumentalist Parker McCollum released his major label debut album, Gold Chain Cowboy, with MCA. The album follows his Hollywood Gold EP which was met with widespread critical acclaim and became the top-selling debut country EP of 2020. McCollum earned his first-ever No. 1 hit with his platinum-selling premiere single, “Pretty Heart,” and his follow-up single, “To Be Loved By You,” also hit No. 1 on the charts. “To Be Loved By You” was also the highest first week debut album of 2021. In November of 2021, McCollum made his first late-night TV appearance performing on Jimmy Kimmel Live.

McCollum has been named an Artist to Watch by Rolling Stone, Billboard, SiriusXM, CMT, RIAA, and more with American Songwriter noting, “The Texas native teeters on the edge of next-level superstardom.” MusicRow listed McCollum as their 2021 Breakout Artist of the Year and Apple also included him as one of their all-genre “Up Next Artists” Class of 2021. A dedicated road warrior, McCollum made his debut at the famed Grand Ole Opry in 2021 and he already sells out venues across the country (over 40 sold out shows nationwide in 2021) including record-breaking crowds in Dallas (20,000), The Woodlands (16,500), Austin (7500+), Lubbock (7700+), Jackson, MS (5000+), Kearney, NE (3000+), Nashville’s Ryman Auditorium, and three nights at Fort Worth’s iconic Billy Bob’s Texas. In March of this year McCollum made his debut at RodeoHouston to a sold-out crowd with over 73,000 tickets sold. McCollum earned his first ACM award for New Male Artist of the Year in March 2022 in Las Vegas.  McCollum also won his first CMT Breakthrough Video of the Year award, a fully fan-voted honor, in April 2022.

ABOUT ERNEST
Nashville’s most unpredictable hitmaker ERNEST is “The Charmer” (MusicRow), a triple threat talent and one of Music City’s on the rise artist/writers that’s changing the status quo. A 2022 Variety Hitmaker, the chart-topping songwriter fuses influences ranging from Eminem to George Jones, creating a twist-heavy verse style that’s become his signature, proving its mettle and earning him seven #1 hits to date. The eccentric free spirit and 2022 CMA Triple Play Award winner released his debut full-length album Flower Shops (The Album) in March, named one of Holler and The Tennessean’s best albums of 2022 and showcasing the more classically countryside of his craft. Nashville’s “busiest – and most consistently successful – creative force” (Tennessean) just wrapped his first-ever sold-out headlining Sucker For Small Towns Tour, spanning college towns nationwide.

ABOUT BAILEY ZIMMERMAN
Establishing himself as one of music’s most exciting new voices, Bailey Zimmerman has arrived at the cusp of superstardom with the 2022 release of his debut EP, Leave The Light On – the biggest streaming country debut of all time and the most-streamed all-genre debut of the year. The EP arrived at No. 2 on Billboard’s Top Country Albums chart and No. 9 on the all-genre Billboard 200 chart, affording the Louisville, Illinois, native to join Zach Bryan and Luke Combs as the only country artists in 2022 to earn more than one million streams on each of a project’s tracks during release week alone. In 2021 the 22-year-old released his very first song. Now, in just one year’s time, Zimmerman touts nearly 1 billion global streams, has earned his first pair of platinum singles, notched three entries on the Billboard Hot 100, and sold out his first headline tour within minutes of tickets going on-sale.

A young artist with the rasp of a seasoned rocker and the heart of a sensitive songwriter, Zimmerman strikes a sweet spot between timeless American country, rafter-rattling arena rock, and the kind of authentic storytelling that tugs at the heartstrings with a sense of humor and a whole lot of soul. With more new music on the horizon, featuring the grit and gravel of his unmistakably Southern drawl, Zimmerman will continue to showcase the straightforward authenticity for which he is known and loved.

MIRANDA LAMBERT ANNOUNCES HER NEW BOOK OF STORIES AND COLLECTION OF RECIPES IN “Y’ALL EAT YET? WELCOME TO THE PRETTY B*TCHIN’ KITCHEN!”