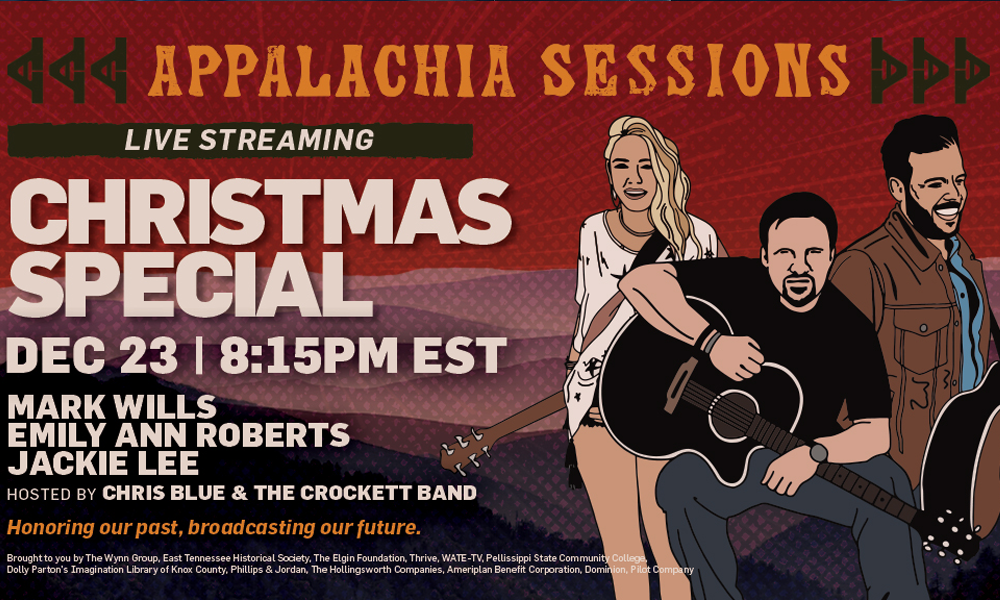 (Nashville, TN – December 15, 2022) A new one-hour concert television series, Appalachia Sessions, presented by the East Tennessee Historical Society, is set to debut on December 23. Featuring a diverse line-up of musicians and focusing on the artists, their roots, and the fundamentals of songwriting, the Appalachia Sessions series will showcase the music born out of the history of East Tennessee and the Appalachian Cultural Region.

Hosted by American soul singer and Season 12 winner of The Voice, Chris Blue, and featuring a live audience of students from Appalachia, the inaugural session, filmed at the Bijou Theatre, is a Christmas special featuring performances by Mark Wills, Chris Blue, Emily Ann Roberts, and Jackie Lee Midkiff.

The East Tennessee Historical Society is putting on the fundraising series to support literacy and speak into the lives of underserved children in Appalachia.

Each Appalachia Sessions season will have ten episodes, with one episode per month. 100% of net proceeds benefit literacy in Appalachia. The event’s primary focus is to speak on the mission of arts education within the school system. It brings in artists to share their upbringing and their songwriting processes. All net proceeds from the TV series will benefit the Appalachia Sessions Fund to support language arts and musical arts education in Appalachia.

Partners include Dolly Parton’s Imagination Library of Knox County, The Elgin Foundation, Thrive, and the East Tennessee Historical Society, amongst others.

A Live Extended Cut of the Appalachia Sessions will be available to media outlets to cross-post/live stream on their Facebook or Twitter. For more information regarding the crossposting, livestream, and participating in this charitable endeavor, find the link HERE or contact Fletcher Lee at [email protected].

The Appalachia Sessions is a televised, one-hour music show that airs once a month and invites the public and students from Appalachia to join as a live audience. Nexstar Media and affiliates from ABC, CBS, FOX, and The CW in Tennessee, Kentucky, and Virginia will televise the show.

Students who attend the live events will receive multiple benefits, including a membership to the Museum of East Tennessee History and the opportunity to participate in the mentor monster program sponsored by Dolly Parton’s Imagination Library of Knox County.

About The Appalachia Sessions: Starting in 1927, record labels came to multiple areas in Appalachia including Bristol, Johnson City, and Knoxville in search of an old-time, genuine sound. During their search, they found influential voices of jazz, blues, and gospel. With this newfound, diverse music, they decided to teach the next generation the joys of music and creativity. The sole mission of The Appalachia Sessions is to leverage the power of music to advocate for literacy for the children of Appalachia. It showcases music that was born out of the history of East Tennessee and the Appalachian Cultural Region. Each Appalachia Sessions season will have 10 episodes, with one episode per month, running from September through May.

For more information and to purchase tickets, visit The Appalachia Sessions on Instagram.