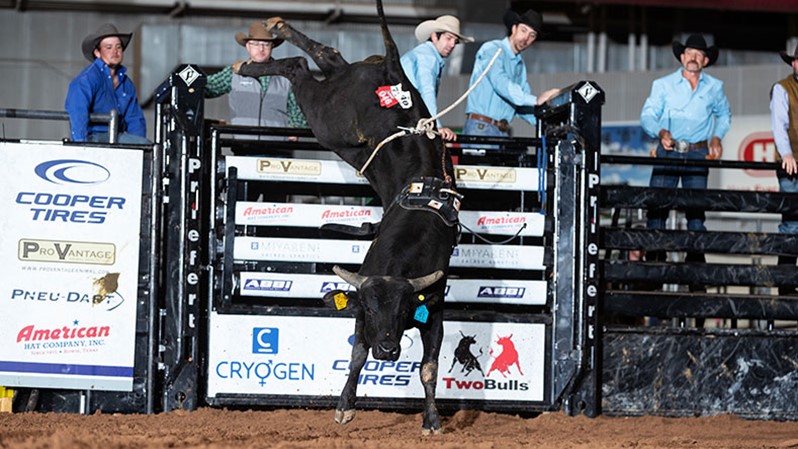 FORT WORTH, Tex. (May 4, 2022) –During the inaugural PBR (Professional Bull Riders) World Finals in Fort Worth, Texas, from May 13-22, ABBI (American Bucking Bull Inc.) will hold two season-defining events of the next generation of bucking bulls, with the American Heritage Futurity scheduled for May 13-14 and a $50,000-added futurity slated for May 20-21, both held outside Will Rogers Coliseum.

The two events will conclude ABBI’s record-setting seven months of events, with the organization scheduled to have awarded $2 million to futurity bulls from November 2021-May 2022.

“It’s always a good feeling to be able to share with our members an increase in money to be won.”

“It’s always a good feeling to be able to share with our members an increase in money to be won.” ABBI President Jay Daugherty said. “We are thankful for those who are the backbone of this company. What better way to show appreciation than by awarding bigger payouts and purses.”

ABBI is the largest bucking cattle registry in the world with more than 300,000 DNA-registered animals. These animals are recognized as being part of a unique breed called American Bucking Bull – registered bulls who can compete at ABBI events for prize money.

The ABBI sanctions and produces marquee events for bucking bull breeders, including the Classic World Finals and Futurity World Finals, which both began in 2004. ABBI paid more than $4.4 million to bucking bulls in 2021, including nearly $1.8 million in Las Vegas alone during the season-culminating World Finals. Superstar animals such as three-time PBR World Champion Bulls Bushwacker and SweetPro’s Bruiser began their careers competing at ABBI events.

An ABBI futurity event is an event open to ABBI registered 2-year-old bulls. Rather than a rider, each bull has a 14-pound box (dummy) placed on his back which is released via remote control at 4 seconds. ABBI judges award the animal a score based on his performance during the 4 seconds.

ABBI programming at the 2022 PBR World Finals will begin with the uniquely formatted $40,000-added American Heritage Futurity on May 13-14.

Different than all other events held by the organization, the American Heritage Futurity features the competing stock contractors relying on the bulls’ bloodlines, betting on their stock before they have even bucked. The animals are entered into the system as calves and sustaining payments are made in the years leading up to the event.

“I believe the event name itself reminds our members what the concept of the American Heritage actually is,”

“I believe the event name itself reminds our members what the concept of the American Heritage actually is,” Daugherty said. “It is a bet on genetics and breeding programs alone. There is some risk to stock contractors, of course, but that is what adds to the excitement and brings an entirely different approach to the competition.”

However, the rewards can be big. The American Heritage Futurity will feature a total purse of $420,000, with the winner slated to earn more than $70,000.

This year’s American Heritage event will also feature a new division, labeled the Non-Winner class, that rewards the highest-scoring calf who doesn’t place in the main purse. This new purse is worth more than $60,000 and will pay $15,000 to the winner of this class.

“Holding one of our higher-stakes events during the PBR World Finals is a huge opportunity allowing new people to witness what it takes to prepare these bucking bulls for the PBR’s premier series,” Daugherty explained. “ It begins when they are born and doesn’t stop once they’ve made it to the big show.”

Along with the two futurity events, ABBI will hold two classic rounds during the 2022 PBR World Finals. The organization will buck roughly 40 bulls during Round 1 and 20 bulls during Round 6 when the top 3- and 4-year-old up-and-coming bulls will go up against the world’s best riders.

These four-legged athletes will compete for an estimated purse of more than $45,000, with $11,500 to be awarded to the first-place performers through the two rounds of competition.

For a complete schedule of events, visit FortWorth.com/pbr.

Stay tuned to PBR.com for the latest news and results and be sure to follow the league on all social media platforms at @PBR.

PBR (Professional Bull Riders Inc.) and a visionary group of stock contractors acquired a DNA Registry formerly known as RSR (Rodeo Stock Registry) in 2003. They understood the value and importance of preserving bucking bull genetics. This database was the foundation of American Bucking Bull Inc. (ABBI) and that registry that would swell from 20,000 to over 180,000 animals in just over a decade. In addition to preserving the genetics of animal athletes, ABBI was determined to develop stand-alone events where the bulls would be judged on their own merits (regardless of how the cowboy atop them did). The combination of the database and events for animal athletes lead to huge paydays and the explosion of bucking bull breeding programs across the country. At one time, the biggest payday a bull could hope to earn was $20,000 for being selected World Champion Bucking Bull. Nowadays animals can earn as much as $500,000 between their 2 and 4-year-old years competing at ABBI events. ABBI now has the world’s largest bucking cattle registry and is the leading bucking bull event promoter and producer. Some of the greatest bulls in the history of the sport, including Bushwacker, have come out of the ABBI’s competition system. ABBI is owned 50/50 between PBR and a group of stock contractor shareholders. It is governed by a Board of Directors made up of PBR representatives and ABBI stock contractors.

PBR is the world’s premier bull riding organization. More than 500 bull riders compete in more than 200 events annually across the televised PBR Unleash The Beast tour (UTB), which features the top 35 bull riders in the world; the PBR Pendleton Whisky Velocity Tour (PWVT); the PBR Touring Pro Division (TPD); and the PBR’s international circuits in Australia, Brazil, Canada and Mexico. In 2022, PBR is also launching the PBR Team Series—eight teams of the world’s best bull riders competing for a new championship—as well as the PBR Challenger Series with more than 60 annual events nationwide. The organization’s digital assets include PBR RidePass on Pluto TV, which is home to Western sports. PBR is a subsidiary of IMG, a global leader in sports, fashion, events and media. For more information, visit PBR.com, or follow on Facebook at Facebook.com/PBR, Twitter at Twitter.com/PBR, and YouTube at YouTube.com/PBR.