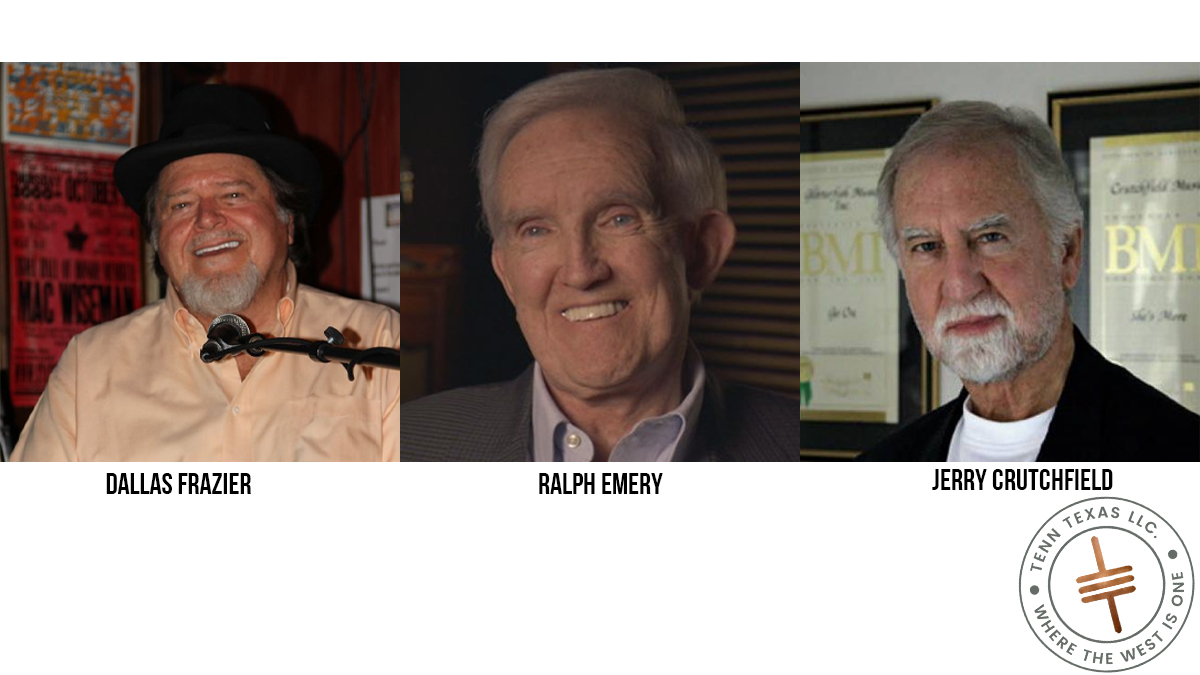 One of country’s most enduring songwriters and Nashville Songwriters Hall of Fame member, Dallas Frazier, passed away at age 82. Frazier’s songs hit the charts with “Elvira” which was a tremendous crossover smash for the Oak Ridge Boys, while Emmylou Harris topped the charts with “Beneath Still Waters,” became one of Nashville’s most sought-after writers, composing hits for Elvis Presley, Moe Bandy, Roy Head, Rodney Crowell, Connie Smith and so many more.

“We have lost three icons of the Nashville music community. They don’t make them like that anymore. They changed the face of music in their unique way. And what they created still reverberates throughout music city.”

Artists and Industry Friends Reflect on Passing of Dallas Frazier

A major loss that will be felt for a long time. It is hard to imagine never hearing a new “Dallas Frazier song,” delivered as it should be and sung by Connie Smith. That team was pure magic.”–Jeannie Seely

“Dallas was a true wordsmith. He could write a range of songs with hit potential, and his resume proves that fact. From “Alley Oop” to “Elvira” – the man’s immense talent will be forever remembered and terribly missed.”–Zacharia Malachi

“I was at the Oak Ridge Boy’s show at the Fire Theatre at the Country Music Hall of Fame a few years ago. Dallas Frazier was sitting in the audience. He was beaming. It was the first time he had ever seen the infamous “Elvira”, which he penned, performed live. The Oaks pointed him out and the writer was lauded and given a standing ovation. It was a perfect moment. I will never forget the smile on Dallas’ face. That is the moment I will choose to remember.”–Devon O’Day, host of Main Street Today

“When I landed my first publishing deal with the Oak Ridge boys owned company Silverline Goldline, “Elvira” had been out quite a while, but landing an Oak Ridge boys cut made me feel like I was a little closer to the right of the Dallas Frazier, he was always someone I looked up to and to be honest, I never stopped.”–H. Jack Williams

“In my early years as a child, I can remember my dad’s love for Dallas Frazier’s music. That helped build my love for country music within my heart and soul. Thank you Dallas for all you gave to the music world.”–Donovan Chapman

Artists and Industry Friends Reflect on Passing of Ralph Emery

“We are sad to hear that our old friend Ralph Emery has died. Ralph is a legend in country music, and was a great friend and supporter of Exile. Our many appearances with him on Nashville Now were always enjoyable, and played a big role in our success. Rest in peace.”–Exile

“Ralph Emery has been synonymous with Country music as long as I can remember. His endorsement of your records was almost crucial to a hit, and his criticism, although painful at times, often taught a lesson that would ultimately prove very useful. I could never imagine the Country music world without him, and I did not want to. Thank you, Ralph and RIP.”–Jeannie Seely

“Ralph Emery was a welcoming host to new artist like me, always engaging in great conversations revealing much about an artist, their music, and especially their day-to-day lives. I always enjoyed joining him on Music City Tonight as he would bring attention to new artist as well as the veteran entertainers. Ralph will be missed personally as well as professionally, he was one of a kind.”–John Berry

Ralph Emery was my mentor. He was a teacher and guiding force, often giving me pep talks in an industry that will kick you in the teeth from time to time. He had a sixth sense about moments I needed wind in my sails. Not only that, but he was a star maker. Ralph would champion people, using every ounce of influence he had to shine the light on others. He is one of the last of the true DJ’s. No one has ever made more star discoveries than Ralph Emery.”–Devon O’Day, host of Main Street Today

“I believe Ralph Emory was the first person who started the “asking what the story was behind the song” and I always looked forward to his show because his relaxed nature allowed all his guest to open up and show their true selves, and by doing that he broadened the country music fan base.”–H. Jack Williams

“We will always be grateful for the legacy Ralph Emery has left on the Country music family! We always looked forward to watching Nashville Now as he brought the best in Country music to our living room growing up.”–Flat River Band

“When I was an 11-year-old disc jockey in Luverne, Alabama, Ralph Emery was a hero. Our radio station carried his daily syndicated radio show, and it wasn’t hard to sell sponsorships. I was honored to cohost the Mel Tillis Memorial at the Ryman with Ralph in 2018.”–Bobby Tomberlin

“Ralph Emery’s dedication to promoting country artists through television and radio was second to none. This is a tremendous loss for our industry, and he will be deeply missed by the entire Country music community.”–Candy O’ Terry and Jacy Dawn Valeras hosts Country Music Success Stories

“Ralph Emery didn’t mince words or questions. He would hit any artist he interviewed with whatever was on his mind and he commanded answers. If there was a buzz of any sort going on, Ralph would come to a conclusion. It’s how many of us younger artists learned the history we know now. A true master DJ and a country music legend.”–Zacharia Malachi

“Meeting Mr. Ralph Emery was one of the most important things I wanted to do by leaving the military and coming to Nashville. The first time I was invited back stage at the Grand Ole Opry, my dream came true meeting Mr. Emery. His inspiration and image as an icon of country music has blessed the world with historic broadcasting for all listeners.  He will be greatly missed.”–Donovan Chapman

Artists and Industry Friends Reflect on Passing of Jerry Crutchfield

Jerry Crutchfield was the consummate song man. He was gifted at matching artists with song and finding talent that was so unique and lasting that no one could deny his ability. No one in any production helm could hold a candle to Crutch. Not only will he be missed, but no one will ever fill his shoes.”–Devon O’Day, host of Main Street Today

“Another great loss in our industry. Although I never got to work with Jerry myself, I admired him as a writer and producer, especially his work with Lee Greenwood and Tanya Tucker. He was one of the most respected businessmen in the business. He will be missed and most importantly, he will be remembered.”–Jeannie Seely

“Jerry Crutcfield had the gift of bring able to wrap the perfect music around a voice, giving an singer the right environment for the song to unfold.I was so excited be asked to be a part of Come Together: America’s Salutes The Beatles. I was trilled when I found out Jerry was going to be the producer! It was great to work with this kind man who brought so much love for music to the project.  He will be missed.”–John Berry

“Jerry Crutchfield was the major producer down the street who I always wanted to hear my songs because at the time he was the man to see. For me, he always had an open door and he was a great songman which made you a better writer for it.”–H. Jack Williams

“Jerry Crutchfield was one of the best when it came to recognizing great songs. Just look at Tanya Tuckers string of hits. I was blessed to have him record one of mine on a Lee Greenwood project. I wrote with some of his staff writers through the years, and it was a cool experience to play Crutch what we had written and so often, he offered great advice on how to make the song better. A lot of people don’t realize that he was a great writer, having songs recorded by Hank Jr., Tanya, Lefty Frizzell, Tammy Wynette and many others.”–Bobby Tomberlin

“A well-crafted recorded composition belongs to the producer as much as it does an artist, and there were a lot of artists that shared victories with Jerry Crutchfield. He wore many hats in the industry, and it’s insane to think of all the hits that wouldn’t be without him.”–Zacharia Malachi