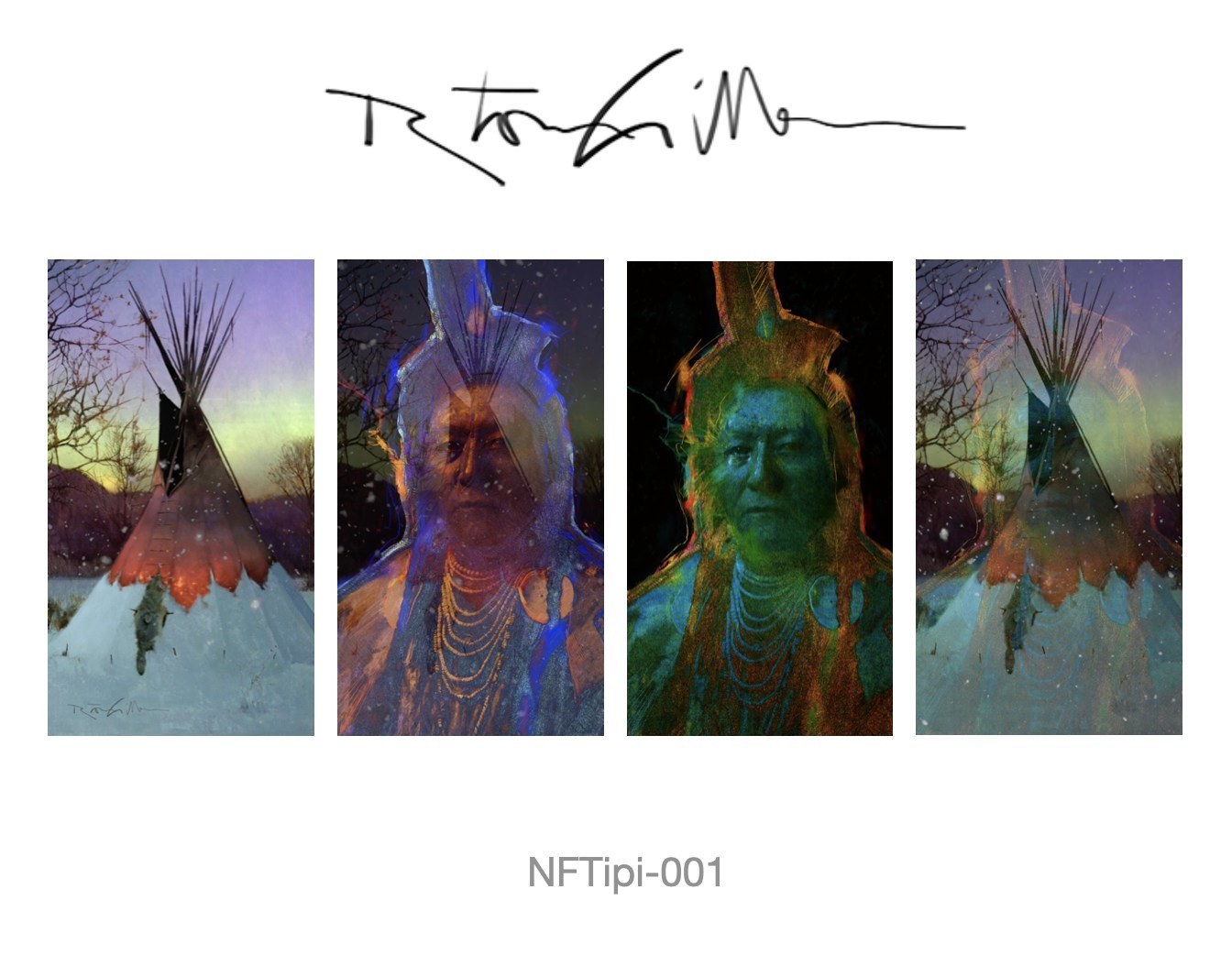 This visually stunning artwork reflects Mr. Gilleon’s mastery of color and the Contemporary Western genre. NFTipi-001 is the first of 12 NFTs in Gilleon’s Mountain West suite that will be auctioned once a month over the next 12-months. In keeping with his pioneering life across a 75-year fine art career, NFTipi-001 redefines the standard of what fine art can be—indeed, showing what the new NFT crypto-asset class might aspire to.

“No artist in the world today—in any art movement, genre, or style—continues to innovate likeTom Gilleon. From his career at Walt Disney Imagineering conceptualizing theme parks thatbecame EPCOT and Disneyland Paris, Tokyo, and Shanghai—to his advent of PIXoilstechnology to create a new genre of NFTs—Tom Gilleon is the contemporary fine artgenius of our time.  But his humble wit and humanity is what gets me. He’s an authentic Montana rancher and artist like Charlie Russell.”

“It seems to me that most NFTs are bought for investment or status. Gilleon’s NFTs will be collected for investment, status, and art appreciation. He will appeal to a whole new group of NFT buyers,” says Texas oilman David Hooper.

NFTipi-001 is a visual jewel box of artistry. In just 35-seconds Gilleon captures his audience with a simple, but diverse composition of a Native American encampment, the Rocky Mountains, portraiture, 3D climate, and chrominance evoking a vision-quest with timeless Native American flute. One senses in the visual domain what can be best described in musical terms—notes, tones, harmonies, and a moving rhythm that takes the viewer to a deeper, contemplative place.

“Gilleon’s NFTs are a visual sanctuary. A higher order of experience,” says Marshall Monroe, former Walt Disney Company creative executive and inventor of the PIXoils™ digital artworks platform. “I call it Romanticism Revival—a new fine art genre for NFTs where a sensory sanctuary transports us out of tech for tech’s sake. In the same way the Romantics of the 18th and 19th centuries rejected industrial-classical constraints in exchange for imagination, reverence for nature, and sovereignty of free expression—we’re opening a portal into a reclaimed universe.”

NFTipi-001 is a collaboration between Gilleon and fellow Disney Imagineer and artist-technologist Marshall Monroe, whose studio is dedicated to transcendent fine art in new emerging forms—from impasto animated pixels to AI robots.

“Thomas Moran, Winslow Homer, Warhol, and Basquiat would have been fascinated by this technology.  To paint the mountains, sea coasts, Elvis in a gunfight, and culturalsubjects not anchored to canvas, but paintings that move with music—Tom Gilleonis lighting up a new genre and generation of artists.”

Tom GilleonMr. Gilleon began his fine art career drawing in beach sand with a stick at 5-years old in 1947.  In a home with no electricity, evening entertainment was sketching and storytelling by kerosene lamp.  Tom learned to draw by watching his immigrant grandfather, a gifted artist and cabinetmaker from Scotland. And from his artist grandmother who strongly aligned herself with Native American culture and taught Tom to hunt, fish, gather edible plants, and shoot a rifle soon after he learned to walk. After serving in the Navy as a cryptographer during the Cuban Missile Crisis, Gilleon’s artistic talents were discovered at Patrick Air Force Base in Cape Canaveral where he was promptly reassigned to illustrate NASA’s Saturn and Apollo space programs. In 1974, Gilleon’s artwork was brought to the attention of nearby Walt Disney World who hired him to conceptualize designs for the upcoming high-tech EPCOT Center. He was soon asked to join the research and development arm of the company in California—Walt Disney Imagineering—where he worked alongside some of the most talented fine art painters in the world. In the 1990s, Gilleon and his family moved to Montana where he began a fine art painting career while still working for Disney. Increasingly, his works portrayed the land and history of the American West in a modernist style.  Gilleon purchased a 2,000-acre ranch on the banks of the Missouri River in Cascade, Montana, named by Lewis & Clark in 1805. 100 years later it became a favorite watering hole of famous western artist, Charlie Russell, who was best friends with the family from whom Gilleon bought the ranch. Today, Gilleon saddles his horse in the same barn Russell saddled his horse and ranches Black Angus cattle.  Gilleon is considered one of the top 5 living Contemporary Western artists today and one of the most innovative artists in the world.  In 2010 Gilleon and Marshall Monroe invented PIXoils™ digital artworks platform now licensed to artists to create digital art and NFTs.

In 2020, Gilleon transitioned from the production mill of gallery representation to paint only museum quality masterworks in personal representation. Gilleon paintings are in the permanent collection of the Whitney Western Art Museum, the National Cowboy & Western Heritage Museum, Spirit of the West: Scottsdale Museum of the West, Booth Museum of Western Art, and the C. M. Russell Museum.

In October 2022, the Scottsdale Museum of the West is exhibiting a major 70-painting retrospective of Gilleon paintings—including oil paintings he created at Disney, his digital paintings, and NFTs.

Gilleon’s prices soared in 2020 as he transitioned to painting MMXX Masterworks. He is now innovating a new genre of NFTs and licensing his PIXoils™ platform to a new generation of artists.

The National Cowgirl Museum to Present an Award to Christina Voros