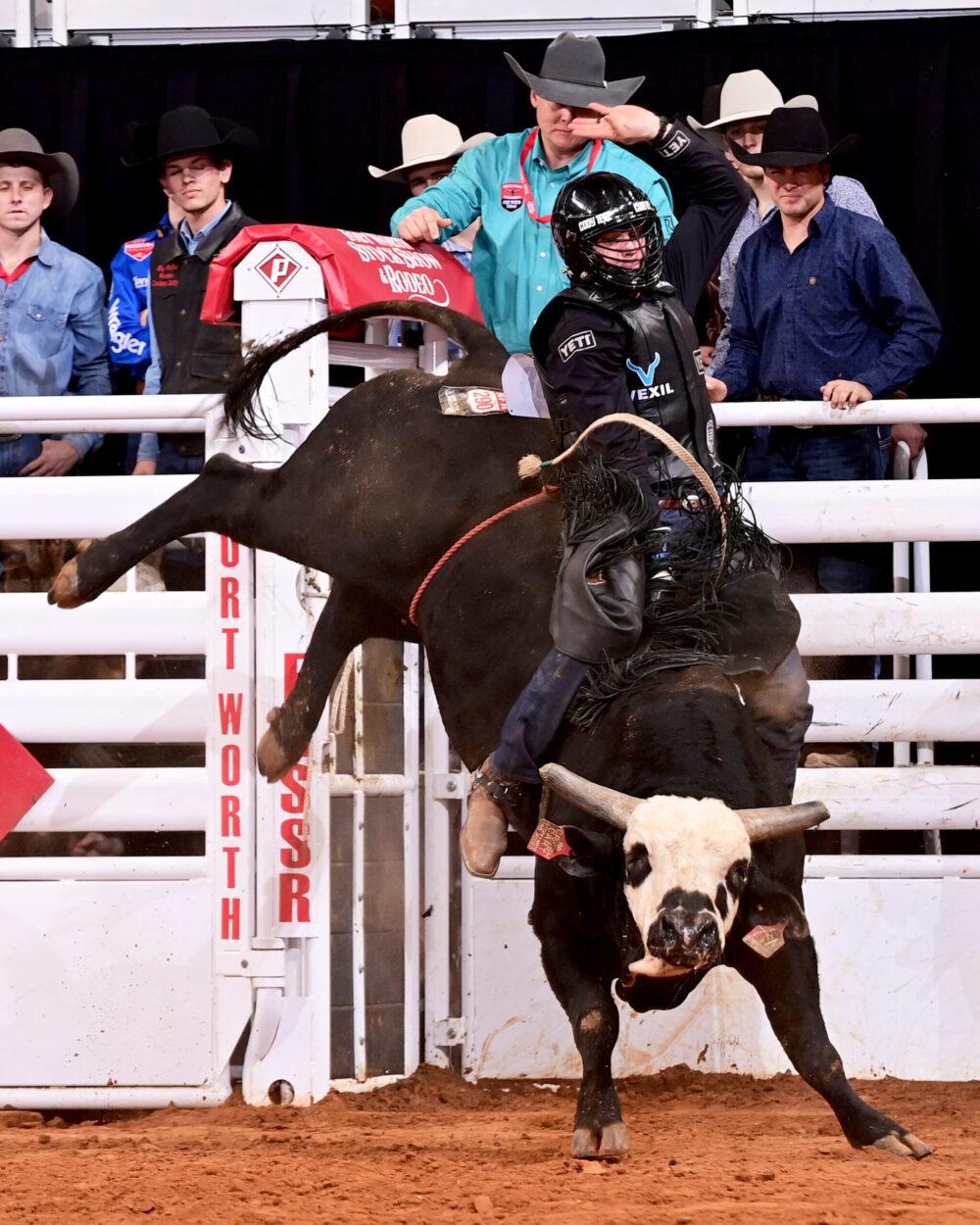 FORT WORTH, Texas (Jan. 17, 2023) Cody Teel, the former world champion bull rider from Kountze, Texas, dominated the competition in the first night of the Fort Worth Stock Show & Rodeo’s Bulls’ Night Out.

Teel showed the form that has earned him five trips to the National Finals Rodeo (NFR) in Dickies Arena. He was the only one of 40 bull riders to make two qualified rides on Tuesday. The field was divided into four sections of 10 riders.

He was one of two riders in the opening section to make a qualified ride, notching 82.5 points on 4L & Diamond S Rodeo’s bull House of Pain and trailing Minnesotan Coy Thorson who scored 87 on Big Rafter Rodeo’s bull Smooth Disaster.

The top 10 scores from the first round qualified to compete on another bull in the short round. Teel, who has been among the best bull riders in the sport for 12 years, was the only one to stay aboard his bull for the full eight seconds. He earned the highest score of the night – 87.5 points – and took the overall lead with 175 points on two bulls.

Forty more bull riders will compete Wednesday night which is the scheduled return to competition for seven-time world champion Sage Kimzey. Kimzey missed much of the 2022 season and December’s National Finals Rodeo following shoulder surgery in June. He is a former champion at this event as well.

The format is the same with each cowboy competing in the long round, followed by a short round featuring the top 10 scorers from the long round. The championship will be awarded to the rider with the highest total score. Bulls’ Night Out at the Fort Worth Stock Show & Rodeo is part of the Professional Rodeo Cowboys Association (PRCA) Xtreme Bulls Tour.

In the junior bull riding for youngsters 10 to 15, Corbin Bunn of Lipan, Texas, won a trophy buckle and $500 with a score of 66 points.

The final Bulls’ Night Out performance begins at 7:30 p.m. Wednesday, January 18 at Dickies Arena, with a new field of bull riders and junior bull riders.

FORT WORTH, Texas — The following are leaders from Tuesday night’s performance of Bulls’ Night Out at the Fort Worth Stock Show and Rodeo, January 17, 2022.