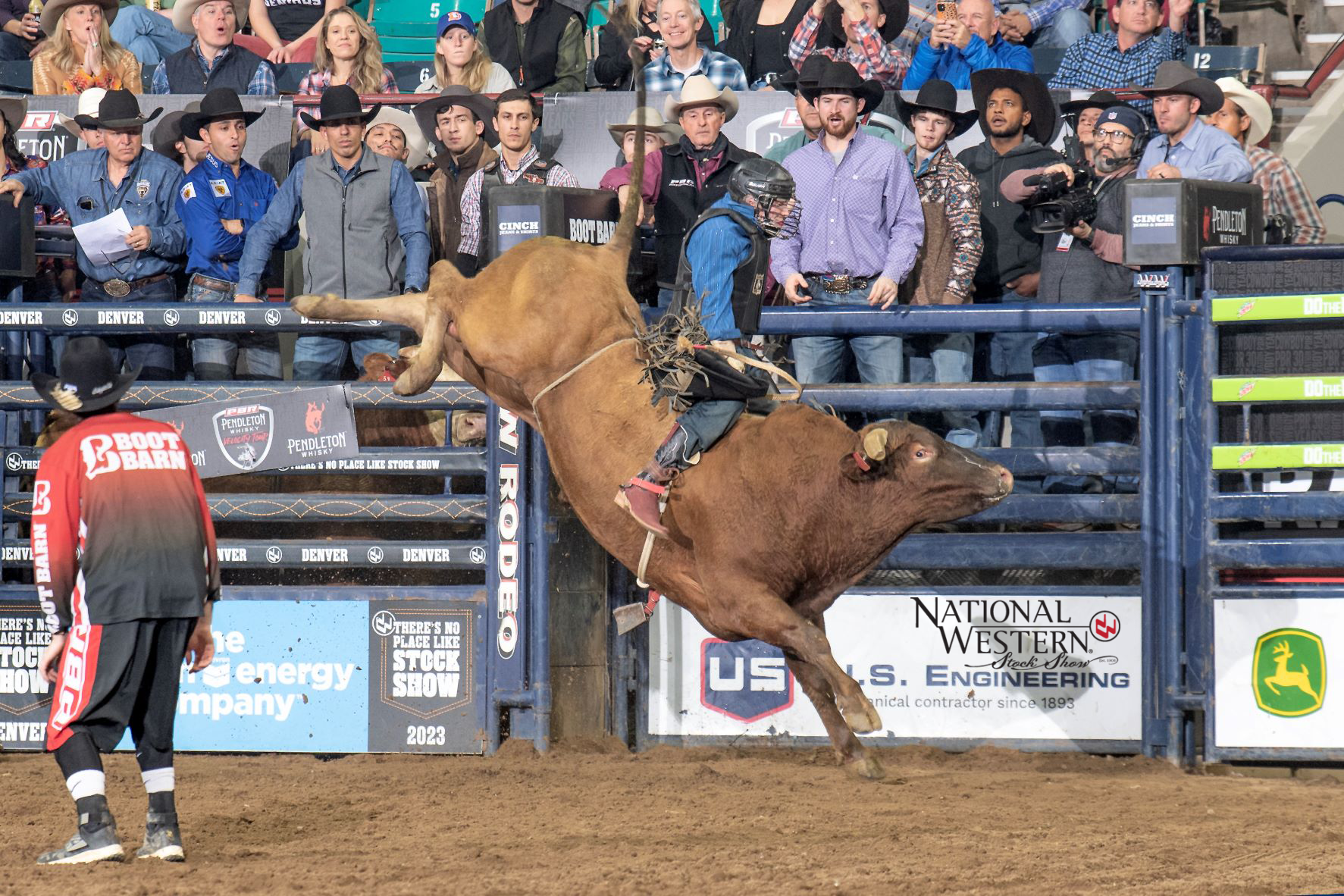 DENVER, Colo. (Jan. 9, 2023) — The odds were definitely in favor of the bulls at the National Western Stock Show’s Denver Chute-Out on Monday night.

As part of the Professional Bull Riders Velocity Tour, seasoned veterans and newcomers on the bull riding tour test their skills against bucking bulls that only want to plant the riders in the dirt. The bulls got their wish at the first performance as less than a quarter of the 45 bull riders made it to the eight second mark and had a qualified ride.    At the top of the leader board was Grayson Cole from Riggold, Pennsylvania who rode a bull from South Dakota named Busted Knuckle. The bull is owned by Bierema Rodeo Inc., who headquarters at White River. When the judges added up their scores, the Pennsylvania and South Dakota combination had an 89-point score.

There are 45 more riders who will attempt to beat that on Tuesday night. While Cole’s score might not hold the top spot, it is likely to give him a paycheck in the first round and it will secure him a spot in Wednesday night’s progressive round. There were ten riders successful on Monday night. There are 30 spots available in the progressive round, so there is plenty of opportunity for Tuesday night’s competitors to advance.

Last year’s bull riding winner at the rodeo in the Denver Coliseum is looking good to ride again Wednesday. Josh Frost from Randlett, Utah, scored 75-points here and is currently in eighth place. Frost is spending plenty of time in the Mile High City riding Monday, Wednesday and then at the Professional Rodeo Cowboys Association sanctioned event on Thursday and Friday.

Robbie Taylor Jr., from Chinle, Arizona is in second with an 86.5. Just one point behind him is Austin Richardson who makes his home in Dallas, Texas. Garrett Jones, also from Texas is fourth with 84. They will all be back at the Coliseum Tuesday to watch what their fellow competitors get accomplished.

About the National Western Stock Show — Established in 1906, the National Western Stock Show is a 501(c) (3) charitable organization that provides college and graduate level scholarships in agricultural-related fields of study. Its mission is to serve producers and consumers throughout the world by being the premier stock show, equestrian competitions and center for year-round events. The 16-day show also serves as an entertainment arena, hosting one of the world’s richest regular season professional rodeos, family and educational shows plus Colorado’s largest western trade show. For more information, visit nationalwestern.com.