CALLISTA CLARK SETS DEBUT ALBUM REAL TO ME: THE WAY I FEEL FOR OCTOBER 14 RELEASE

JASON ALDEAN SPENDS THREE WEEKS ATOP THE COUNTRY RADIO CHARTS WITH 27TH CAREER NO. 1 “TROUBLE WITH A HEARTBREAK,” MARKING BACK TO BACK MULTI-WEEK HITS OFF MACON, GEORGIA

TAYLOR SHERIDAN, THE COWBOY BEHIND "YELLOWSTONE" 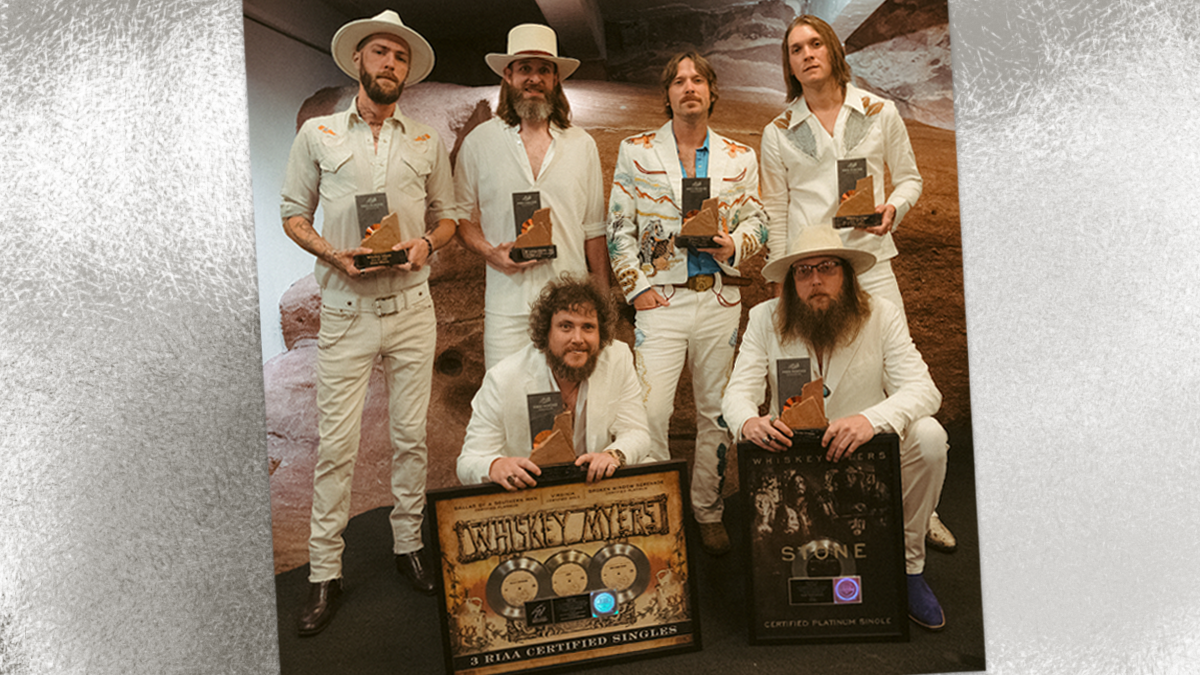 MORRISON, Colo. – With Cowboys & Indians celebrating Whiskey Myers as “on a course toward massive success,” the band continued to prove just how true that is last night, June 6, at their sold-out Red Rocks Amphitheatre debut. Thrilling the audience of 9,525 with 19 hard-rocking, genre-bending songs across more than two hours of nonstop music, the six-piece was also surprised backstage pre-show with plaques celebrating four brand-new RIAA certifications. “Stone,” “Ballad of a Southern Man” and “Broken Window Serenade” earned Platinum distinction while “Virginia” was certified Gold.

Strutting on stage backed by a live horns section, the band kicked off the show with a rousing live rendition of current single “John Wayne,” praised by Billboard as “nearly five minutes of righteous Southern rock, which arrives via a swampy mesh of soul and funk,” continuing, “Cody Cannon’s raspy growl leads a flurry of sizzling guitar, thumping bass, swirling harmonica and flashes of horns, as this group continues pushing its boundaries.”

The energy continued to rise from there with two tracks off their 2019 chart-topping album, WHISKEY MYERS; Top 20 fire-burner “Gasoline” and the reflective “Bury My Bones,” before bringing the crowd’s cheers to a new high with the fuzzed-out groove of their hit “Frogman,” a tribute to America’s Navy Seals that saw Cannon summoning even more energy from the crowd with his hands in the air.

The newly certified “Broken Window Serenade” offered one of many crowd singalong moments of the night during a section of ever-popular songs from prior albums Firewater and Mud, as the volume was turned up once again during “Bar, Guitar and a Honky Tonk Crowd” and “Deep Down in the South” with the chorus of claps during recent single “Die Rockin’” reverberating off the iconic rock faces.

The set slowed down temporarily during the now Gold-certified ballad “Virginia,” which saw percussionist Tony Kent transition to the keys partway through the song as Cannon asked for the house lights up to see the still-standing crowd. Tucked among “Glitter Ain’t Gold,” “Early Morning Shakes” (which included one of the night’s many extended jam sessions) and “How Far” (punctuated by a rousing horns solo) was a sneak peek at yet-to-be released track “The Wolf” off the band’s sixth studio album, Tornillo, set for release July 29 via their own Wiggy Thump records with distribution by Thirty Tigers.

As the band left the stage to close out the main set the crowd never left their feet, reaching a fever pitch as Cannon returned solo. “Thank y’all so much for being here tonight, it means the world,” he remarked. “We’ve never played a place this nice before, so we had to go to the Goodwill to get us some suits and class it up a bit,” he joked of the all-white custom suits the band donned for the occasion before treating the loyal fans who sold the venue clean the day the long-awaited show went on sale to an acoustic version of “Reckoning.”

“It’s comin’!” he laughed as the still at-capacity crowd then began chanting the opening lines of “Ballad of a Southern Man” as if on cue. The full band rejoined him on stage to fulfill the fans’ request, launching into a five-song stretch to close out the memorable night. Lighters filled the Colorado night sky as percussionist and keys player Tony Kent tapped out the opening chords of “Stone” before breaking out his famed cowbell high kick during beloved classic “Home.” Lead guitarist John Jeffers then took the lead on fan favorite “Bitch” before openers Read Southall Band and Shane Smith & The Saints joined the onstage party – along with the band’s family members – for the ultimate finale with a rock ‘n’ roll revival cover of Tom Petty and the Heartbreakers’ “Refugee.”

As the band takes the show to the Bonnaroo Music and Arts Festival next weekend, June 17, while continuing to fill venues 10,000+ strong on their cross-country Tornillo Tour, the sold-out Red Rocks debut served to prove what Classic Rock Magazine proclaims of Whiskey Myers: “Authenticity: you can’t buy it, you can’t bluff it. And you can’t beat it when it comes to delivering dirty, down-home, electric guitar music from the American south.”

For more information and a full list of upcoming shows, visit www.WhiskeyMyers.com and follow on social media @WhiskeyMyers.

About Whiskey Myers
Genre-bending band Whiskey Myers have played more than 2,500 live shows to ever-increasing crowd sizes since their emergence in 2007. Their forthcoming self-produced album, Tornillo, set for release July 29, follows their self-produced fifth studio album, WHISKEY MYERS, out now on the band’s own Wiggy Thump Records. WHISKEY MYERS debuted at No. 1 on both the Country and Americana/Folk sales charts, at No. 2 on the Rock chart and No. 6 on the all-genre Billboard 200 chart (No. 3 among new releases). Their previous album, Mud, reached No. 1 on the iTunes country chart with single “Stone” hitting Top 10 all genre. In total, Whiskey Myers have sold more than 1.2 million albums and amassed over 1.5 billion streams while earning four RIAA Gold and Platinum certifications. USA Today describes the band led by frontman Cody Cannon as “a riff-heavy blend of Southern rock and gritty country that has earned comparisons to the Allman Brothers Band and Led Zeppelin,” with Rolling Stone noting “it’s the seminal combination of twang and crunchy rock & roll guitars that hits a perfect sweet spot.” The band known for their high-energy live show and unique sound has also earned sync success with features (and an on-screen appearance) in Paramount Network’s hit show “Yellowstone” as well as the Renée Zellweger-led Netflix series “What/If,” the Angelina Jolie film “Those Who Wish Me Dead” and hit CBS series “SEAL Team.”

THE ANIMAL WELLNESS PODCAST: MONTY ROBERTS, “THE MAN WHO LISTENS TO THE HORSES” TALKS BELMONT STAKES, WHIPPING AND MORE