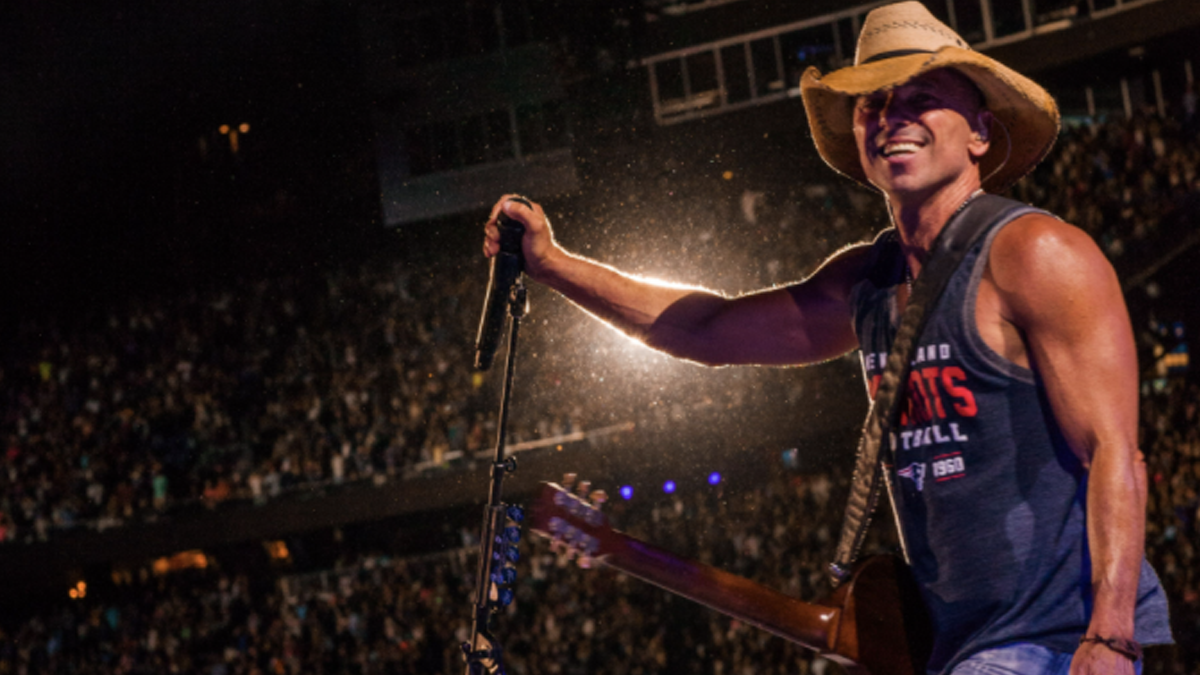 ST. LOUIS, Mo. – Even before Carly Pearce hit the stage at Busch Stadium to kick-off the third major show of the Here And Now 2022 Tour, Kenny Chesney and his road family were kicking tour traditions into high gear with the KenPuppy Derby. To commemorate Derby Day, have fun and create memories, Chesney and team enlisted Stray Rescue St. Louis to bring 31 shelter puppies to the venue for a puppy race/adoption event in the afternoon.

That energy held when the songwriter/superstar from East Tennessee strode onstage in a grey tank top for a surging “Beer in Mexico” that tumbled into an 11-song sweep that included a double-timed “Here And Now,” a call-and-response “We Do” and “Pirate Flag,” featuring Jon Conley on both bouzouki and fiddle. With band leader/keyboardist Wyatt Beard wearing a Mickey Gilley t-shirt, it was a celebration of many phases and stages of Chesney’s career – and the fans were frenzied in their response.

“It hits you like a wave,” Chesney says of the response. “St. Louis knows how to throw open their hearts, to sing those songs with everything they’ve got… So we want to come strong. It’s why the tour traditions matter so much, they feed us long before anyone’s even in the building; then when we get to actually see No Shoes Nation, we’re already in the moment and ready to rock.”

For Busch Stadium, Chesney pulled out the bar standard “Out Last Night,” co-written with Chesney regular Brett James, that boasts all the lines and joys of having a big time with your friends. It was the first time this tour the eight-time Entertainer of the Year has pulled the fast pitch bit of whimsy – and the crowd was right there, singing, “I was a doctor, a lawyer, a senator’s son / Brad Pitt’s brother and a man on the run…”

“Part of the joy in all of this is what you don’t expect,” he explains. “It’s why teaming with Stray Rescue St. Louis, who were so helpful to us when we were evacuating all the island dogs after the hurricanes, for a ‘race’ where we let puppies chase each other around backstage, or pulling out a song nobody sees coming keeps everyone loose and having fun. You don’t need to, but why wouldn’t you.”

After a chilly week with rain, the sun broke through for the show. With the temperatures climbing and a hunger for summer in the air, all 40,653 tickets were gone long before Chesney hit the stage of the storied baseball field – and all those voices could be heard singing the old “How Forever Feels,” the game-changing “No Shoes, No Shirt, No Problems,” the retrospective “Young” and “I Go Back,” as well newer jewels “Noise,” “Setting the World on Fire” and “American Kids.”

“If there’s one thing No Shoes Nation is showing me,” Chesney said backstage after, “it’s how passionate they are about this music, our connection and coming together. When you see those fans, hear their voices, you can tell this matters to them. They’ve come for a reason, and we are all so very grateful to hear, see and reach out to the fans after four years! It’s awesome.”

Here And Now 2022 is presented by Blue Chair Bay Rum and fueled by MARATHON. It’s going to be a long, hot summer with a whole lot more music.

ARTISTS AND INDUSTRY FRIENDS REFLECT ON THE PASSING OF ACM ENTERTAINER OF THE YEAR AND TEXAS COUNTRY MUSIC HALL OF FAME MEMBER, MICKEY GILLEY