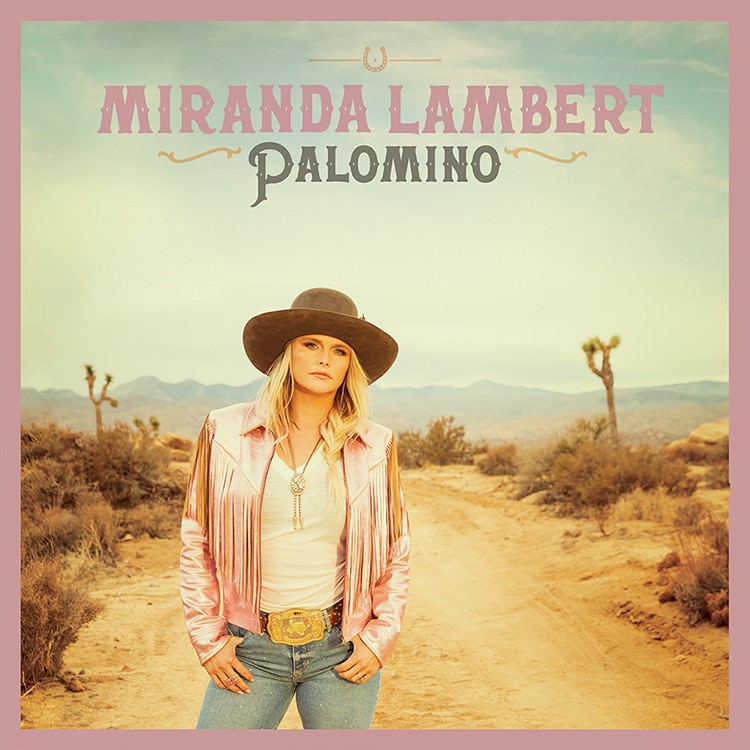 TORONTO, ON. – For reigning ACM Entertainer of the Year Miranda Lambert, each of her seven consecutive No. 1 albums has presented a chance to explore a new theme while pushing herself across varying sonic landscapes. With the progressive 15-song album, Palomino, due Friday, April 29, Lambert has crafted a record that explores the world and the people in it, seeking beauty and adventure all around.

A line from the first song written for the album perhaps sums up the project as a whole best: “there’s always been a stranger in my soul / who loves a good goodbye and a good hello,” she sings in “Tourist.” On Palomino, her inner stranger travels lyrically from Fort Worth to the Mojave Desert; Battambang, Cambodia to Maine; the Crystal Palace in Bakersfield to the Rocky Mountains and beyond. In each destination and with every character met along the way, Lambert’s freewheeling trek is a work of unbridled freedom and self-discovery without painful introspection.

“The making of this record has been one of the most fun and creative experiences of my career,” reflects the woman who holds the title of most-awarded artist in ACM history. “Luke Dick, Natalie Hemby, and I went out to my farm in Tennessee in 2020 and started writing songs. We figured while we have time let’s get out to the country and see what happens. The first one we wrote was ‘Tourist’ and that set us on a path to create something with a bit of a theme. Since we couldn’t travel at the time, we decided to go on a journey through songs. I hope y’all are ready to travel with us wandering spirits and meet some cool characters with great stories.”

Her first solo album since 2019’s GRAMMY-winning Wildcard (despite a busy interim that included releasing the GRAMMY-nominated collaborative project The Marfa Tapes as well as Pistol Annies celebration Hell of a Holiday), Palomino opens with a slow build and a low-slung vibe on “Actin’ Up,” with the opening track serving as the first in a series of postcards from the road, images and moments, places seen and swallowed whole, characters you won’t forget…it’s all here in a brew of styles, sounds and wordplay that are absolutely Miranda.

Tapping longtime songwriting collaborators Luke Dick (Eric Church, Kacey Musgraves) and Jon Randall (Emmylou Harris, Dierks Bentley) to co-produce with her, Lambert once again pushes the envelope of what country music can contain. Whether the bump-and-grind thump of the one who can’t be extinguished on “I’ll Be Loving You,” the skunk weed strut of Marfa sessions’ revisited “Geraldene,” the gorgeously hushed vintage bar-room heartbreak of “That’s What Makes the Jukebox Play,” or the sunny life code that informs the ever-curious songwriter on “Tourist,” Lambert has fashioned a true song cycle, a journey of one woman questing for happiness and the folks she meets along the way.

There’s the go-lightly acousticness that suggests ‘80s Nitty Gritty Dirt Band on “Pursuit of Happiness,” the breezy Beyoncé-invoking Wild West truth of “If I Was A Cowboy” featuring the legendary Al Perkins on steel and the funky Deee-Lite meets Creedence Clearwater Revival trip down the Cumberland River on “Music City Queen” with the B-52s.

“Unthinkable things coming together,” marvels the woman who has won the Academy of Country Music’s Female Artist of the Year a record-setting nine consecutive times and the Country Music Association’s Female Vocalist of the Year seven times. “When Natalie, who is such a bad ass singer and the kind of person who raises the cool in every room, started singing ‘Rollin’ on the river…,’ we were all like, ‘What if the B-52s sing on this?’ They loved the song. They Zoomed in with Luke and Jon and sang their part, which gives me so much joy. I missed their Zoom, ‘cause I was on a plane; but to ZOOM the B-52s into your record? Yes, please.”

“I love everything about Marfa: some friends around a campfire, no fixes, no protocols, no filters. It was raw and real, and I wanted to take some of that with me,” remarks Lambert. “‘In His Arms,’ ‘Waxahachie’ and ‘Geraldene’ got to go on this journey with us, cutting them with a full band – and usually the public doesn’t get to hear that part, which I’m really excited about.”

The references tucked throughout the album – Little Feat’s “Willin’,” Bruce Hornsby and the Range’s “Mandolin Rain,” Emmylou Harris’ “Roses in the Snow” – create a treasure hunt for music fans of all ages. For Lambert, raised on a healthy diet of Texas icons, classic and modern country, rock & roll and pop radio as a girl, it’s how influences come together and pollinate each other that make Palomino so interesting and so fun.

When Dick suggested Mick Jagger’s “Wandering Spirit,” which he felt embodied the project’s manifest destiny, she knew it was a matter of making the song her own. Enlisting Sarah Buxton and The McCrary Sisters, known for their work with Bob Dylan, it became a feverish downhome gospel for ramblers of all stripes and stands tall as the only outside cut on the project.

Only Lambert & Co. could come up with the characters in the outrunning heartbreak boogie of movin’ on and makin’ friends found in “Scenes,” from a trucker named Dwayne to an old hippie named “Katie with a K.” Equally frisky are the big money earners on the quirky, barbwire plucky “Country Money” – whether the Carter Sisters and their good corn liquor, Connie Johnson and her cattle or Carol Jean the chicken egg queen, these ladies are making bank.

It’s that desire to taste it all, to explore the possibilities while sidestepping the statements and judgements that colors Palomino. And it’s not all happy-go-lucky stuff, even if it feels that way. Yearning and driving through the night on the sweeping “Waxahachie,” the tumbling “Strange ” available everywhere now offers a more philosophical approach to being out of sorts. By “Carousel,” the almost lullaby closer, we meet Elaina, a former circus highwire walker/trapeze artist living in Nacogdoches as a mother and wife. With the exhaled truth of how she came to leave the circus – “She fell so hard because he always let her fly / Till he left her heart suspended in a cotton candy sky…” – with a broken heart she couldn’t heal, it speaks volumes about the multitude of lives most people contain.

For Lambert – and lovers of her wild-eyed country – Palomino is as much about the journey as the destination and the characters along the way.

See songs from Palomino live when Lambert and Little Big Town joins forces to co-headline this spring’s The Bandwagon Tour, a joint tour produced by Live Nation, featuring The Cadillac Three as support on all dates and visiting 15 cities beginning Friday, May 6 in Houston, Texas.