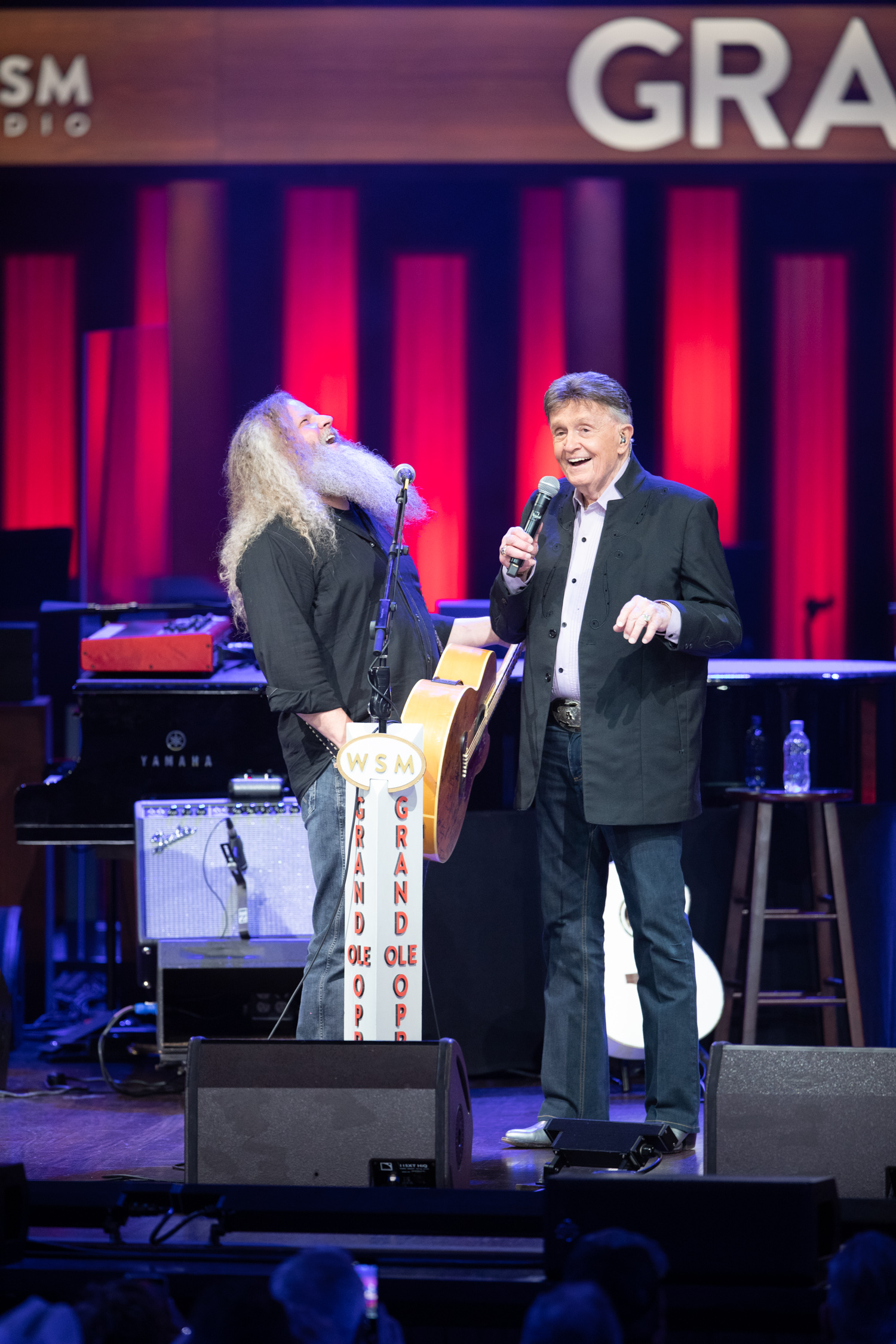 NASHVILLE, Tenn. – (March 19, 2022) – Multi-Grammy award nominee Jamey Johnson was invited to become a member of the Grand Ole Opry tonight. The surprise invitation came from Opry member Bill Anderson at the close of a writer’s round featuring Anderson, Johnson, and award-winning songwriter Buddy Cannon performing songs they had written together.

Anderson opened the round by reflecting on the many times the trio spent writing together. During one songwriting session, Anderson asked Johnson what was going on in his life at the time and he replied he was going through a divorce. That day the trio went on to write “Give It Away” which became an award winning #1 hit for George Strait. The next song they performed was “Everybody Wants To Be Twenty-One” written by Anderson and Johnson. Rolling Stone Country premiered the video for that song in March 2019. “We don’t always write serious songs,” Anderson said as they were performing the last song together. “Strait, Joe Nichols and a few others cut this one, ‘Cheaper Than A Shrink.’”

After their final song together Anderson explained, “Jamey you made your Opry debut 17 years ago and you’ve been a frequent guest many times. But Opry management told me to tell you that this is going to be your last guest appearance.” And Johnson quipped, “Well, I’ve been kicked out of a whole lot of places.” “Well,” Anderson continued, “The next time you appear on this stage you will be the newest member of our Opry cast and family!”

As the audience was roaring to their feet Anderson stated to Johnson he needed to actually say yes, “I accepted it 20 years ago! I really don’t know what to say except the obvious. I love country music. I would have never moved here if it wasn’t for that; for the Opry keeping it alive and for the fans. I love you. Thank you.”

Anderson closed with, “The Opry’s going to be a better place because you’re a part of it.” Johnson wrapped up the set with a solo performance of his song “In Color.”

An induction date for Johnson will be announced soon. Tickets for all 2022 Opry performances are on sale now.

About Jamey Johnson
Eleven-time Grammy-nominated singer-songwriter Jamey Johnson has been called “one of the greatest country singers of our time” by to The Washington Post. He is one of only a few people in the history of country music to win two Song of the Year Awards – for “Give It Away” and “In Color”– from the Academy of Country Music and the Country Music Association.
Johnson has received tremendous praise from The New York Times, Rolling Stone, The Wall Street Journal and other publications, many of which have hailed his albums as masterpieces. He was among the artists asked to set Johnny Cash’s poetry to music in the new album Johnny Cash Forever Words: The Music. His influential album, That Lonesome Song, was certified platinum for 1 million in sales, and his innovative double album, The Guitar Song, debuted at No. 1 on the country album charts and was certified gold. In 2012, he released a Grammy-nominated project honoring one of his heroes, Living for a Song: A Tribute to Hank Cochran.
In addition to his own recordings, he has written songs for George Strait, Willie Nelson, Trace Adkins, James Otto, Joe Nichols and others.

About the Grand Ole Opry
The Opry presents the best in country music live every week from Nashville, Tenn. The Opry can be heard at opry.com and wsmonline.com, SiriusXM Willie’s Roadhouse, and its flagship home, 650 AM-WSM, with Saturday night shows seen on the Circle Network. The Grand Ole Opry is owned by Ryman Hospitality Properties (NYSE: RHP). For more information, visit opry.com.