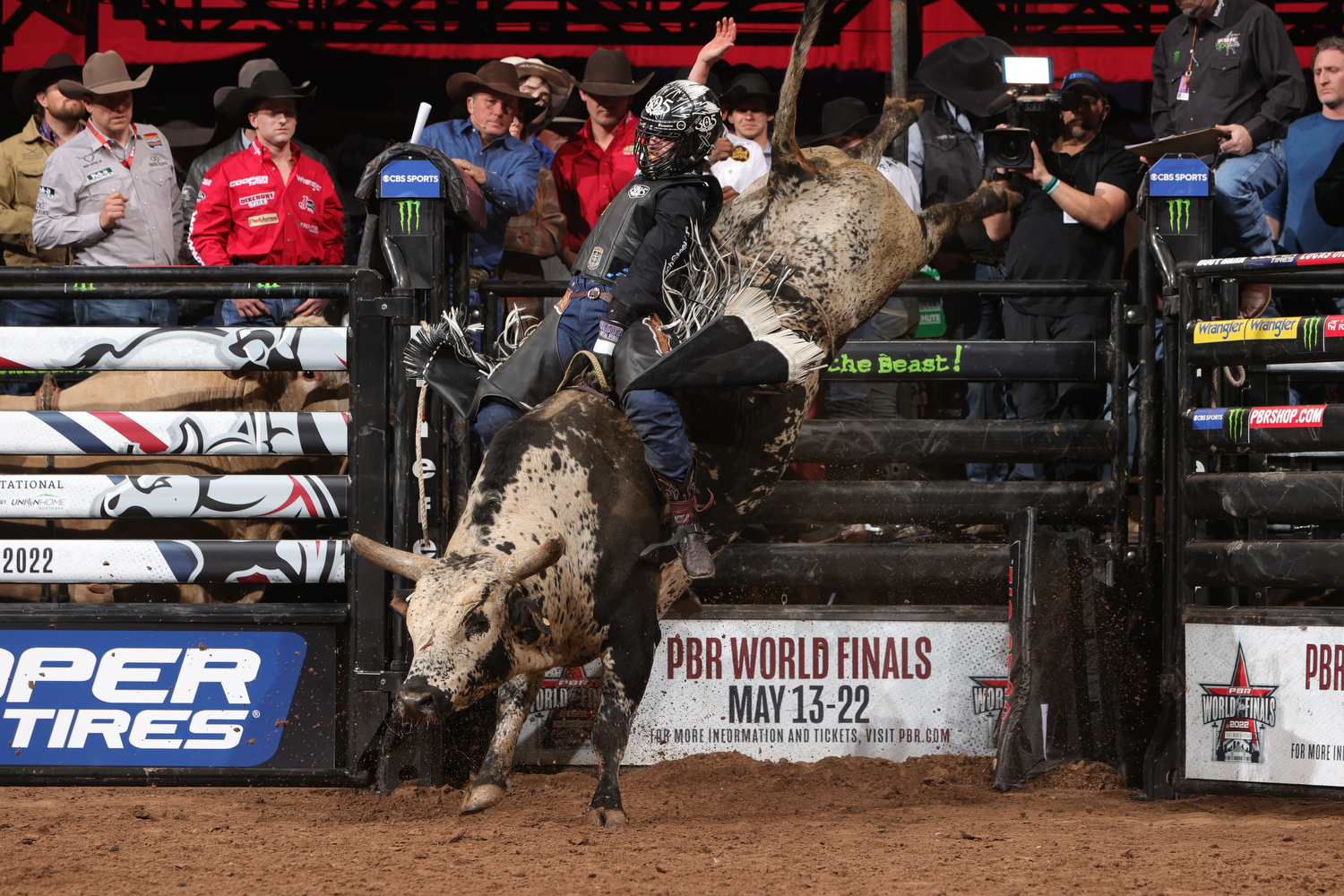 OKLAHOMA CITY, Okla. – As action got underway for the 22nd PBR (Professional Bull Riders) Unleash The Beast event in Oklahoma City, Native American sensation Stetson Lawrence (Williston, North Dakota) showed up and showed up, winning Round 1 of the PBR Express Ranches Invitational, presented by Union Home Mortgage, to crack the world’s Top 5 in the race for the 2022 PBR World Championship.

However, despite earning a qualified ride, the out ended in pain for Lawrence. After hitting the ground, the bull landed on Lawrence’s leg, gashing his calf. In need of multiple stitches, Lawrence still took to the dirt on crutches to greet the raucous crowd as he was anointed the Round 1 winner.

Lawrence’s efforts earned him 28 world points. He rose two positions in the world standings, climbing from No. 7 to No. 5. He now trails No. 1 Joao Ricardo Vieira (Itatinga, Brazil) by 232 points.

Awaiting Lawrence in Round 2 is Theodore (Lari Crane/Gene Owen).

Kyler Oliver (Roy, Utah) finished second in the opening round of competition in the Sooner State, garnering 18 world points.

The score, coupled with the 4.94-second buckoff dealt to Vieira by Figure 8 (6M Ranch/Rockin’ T Ranch), allowed Oliver to shrink the Brazilian’s stronghold atop the world standings from 133.5 points to 115.5 points.

Attempting to reclaim the world No. 1 ranking he held earlier in the season, Oliver will look to further decrease Vieira’s lead when he climbs aboard Batter Up (Crooked Crown Buking Bulls) in Round 2.

While Vieira was bucked off in their first meeting, dispatched in 2.43 seconds during Round 2 of the 2019 tour stop in Minneapolis, Minnesota, the grizzled veteran covered the bull when their rivalry was renewed, scored 90.25 points in Round 1 of the 2021 Unleash The Beast event in Greensboro, North Carolina.

After missing two events due to a knee injury, Austin Richardson (Dallas, Texas) returned with a bang, finishing third in Round 1 of the PBR Express Ranches Invitational, presented by Union Home Mortgage.

Richardson rode Mr. Personality (Southern Cross Bucking Bulls) for 87.5 points to earn 17 world points. He gained five positions in the world rankings, rising from No. 21 to No. 16, and will continue to chase his first career premier series win in Round 2 when he attempts Detroit Lean (Blake Sharp/Henry Wilson).

In the race for the 2022 PBR World Championship, Vastbinder is now No. 6 while Dougherty is No. 15.

They have drawn X-Factor (Paradigm Bull Company) and Kid Knapper (Phillips/Cooper/Scruggs Bucking Bulls), respectively, in Round 2.

While both riders have been consistent in their second year on tour, Vastbinder has been electric. Thus far in 2022, Vastbinder has gone 12-for-17 (70.58%), including covering 10 of his last 11 bovine athlete opponents.

Covering Hoochie Coochie (Adelhardt/No Credit/6-C) for 86 points, the score marked Nance’s 298th career ride on the premier series. Should he cover both of his potential draws on Championship Saturday, including King Brute (Crooked Crown Bucking Bulls) in Round 2, Nance would become the 20th man to join the prestigious 300-ride club in the PBR’s 29-year history.

Seeking history of his own in 2022, attempting to become the first rider in history to win three consecutive gold buckles, two-time reigning World Champion Jose Vitor Leme (Ribas do Rio Pardo, Brazil) was bucked off in uncharacteristic fashion in Round 1. Leme was sent airborne after lasting just 2.33 seconds atop Tulsa Time (Cord McCoy/ProVantage Animal Health).

Leme will look to reverse his fortunes in Round 2 when he attempts Hou’s Magic (Phenom Genetics/Sankey Pro Rodeo/Spurs West, LLC/Hookin’ W Ranch).

The opening night of the PBR Express Ranches Invitational, presented by Union Home Mortgage, also included an ABBI (American Bucking Bull Inc.) Classic Round that had 34 of the top 3- and 4-year-old up-and-coming bulls bucking for their share of the $33,000 event purse. An ABBI Classic competition is the next step in a young bovine’s competitive career that involves bucking with a rider.

For just the second time in ABBI history, five Futurity calves from the $50,000-added Guthrie, Oklahoma, event two weeks prior, bucked inside Paycom Center in a showdown to see who would take home just under $40,000 for capturing first place.

Action for the 2022 PBR Express Ranches Invitational, presented by Union Home Mortgage, will conclude with Round 2 and the championship round on Saturday, February 12. Action gets underway at 6:45 p.m. CST.

PBR RidePass on Pluto TV will offer re-airs and on-demand replays of every PBR Unleash The Beast event. PBR RidePass is available on desktops, laptops and mobile devices via www.pluto.tv. Tune to channel 720 for the latest programming schedule, and click here for on-demand PBR programming.