CMT Reveals "Next Women Of Country" Class of 2022
Advertisement 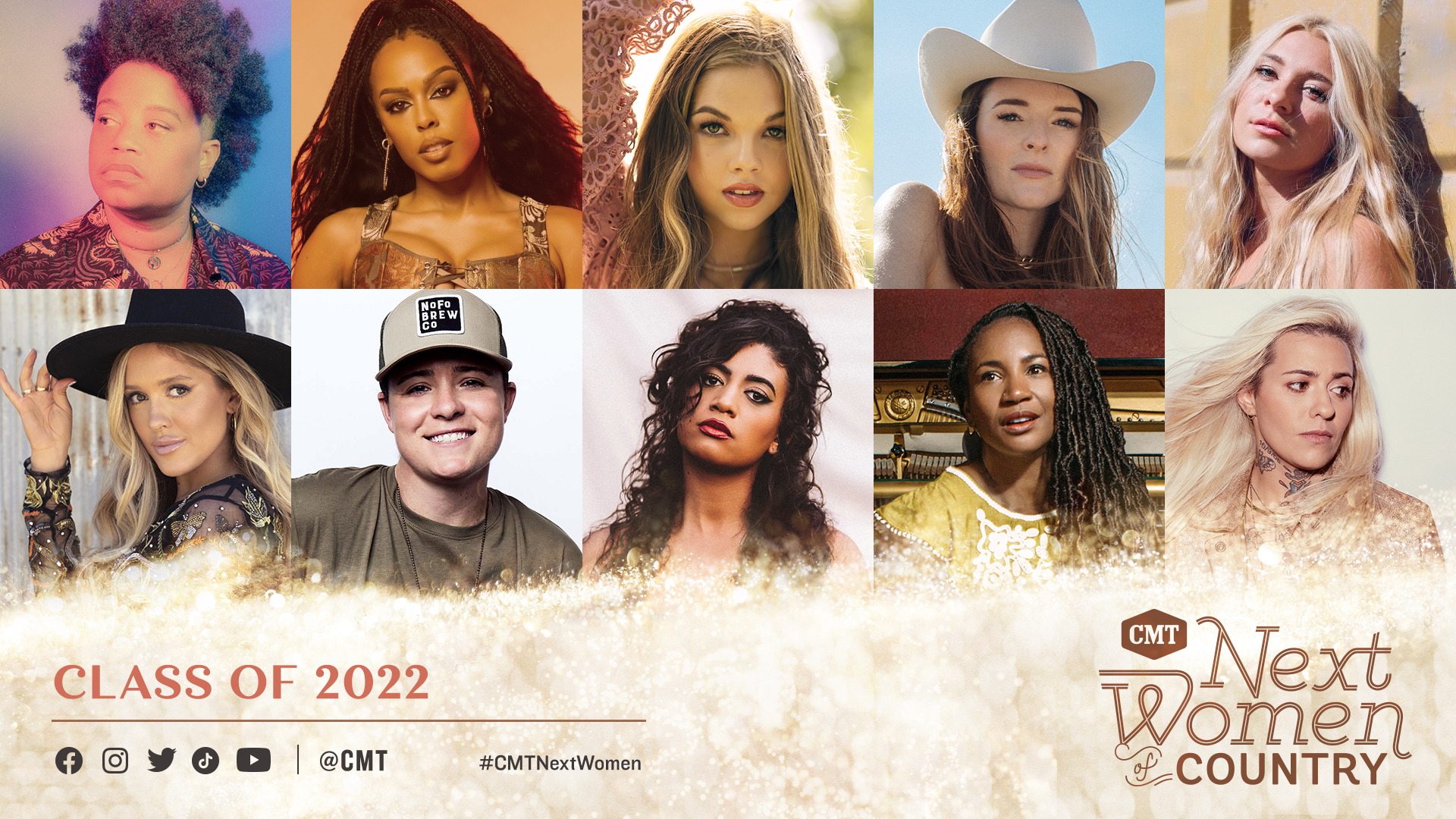 “We are so excited to welcome our newest class of ultra-talented female artist into our beloved CMT Next Women Of Country franchise,”

For the second consecutive year, CMT Hot 20 Countdown will officially introduce the class of 2022 during a dedicated three-hour special episode this weekend on Saturday, January 22nd and Sunday, January 23rd beginning at 9AM ET on CMT. The special will feature exclusive interviews and performances with each new NWOC member, plus an exclusive interview with NWOC alumna (2015) Maren Morris who reflects on her experience with the program.

“We are so excited to welcome our newest class of ultra-talented female artists into our beloved CMT Next Women of Country franchise,” said Leslie Fram, SVP of Music & Talent at CMT. “Each is boldly blazing their own spirited path on their own terms, destined to make a lasting impact on country music. We celebrate this diverse group of women and look forward to supporting their work and their careers in 2022 and beyond.”

As part of the brand’s CMT Equal Play initiative, a dedicated effort to elevating all underrepresented voices in country music, CMT also provides its NWOC access to social impact and artist advocacy opportunities designed to assist them in supporting charitable causes and social issues. These resources will be provided by Nashville-based social impact firm, The Change Agent·cy

A staunch advocate for country music’s female artists, CMT first launched its “Next Women of Country” campaign in 2013 as a substantial, meaningful effort to support and expose developing female talent, both signed and unsigned, in a male-dominated format. The initiative has grown significantly since its inception, showcasing emerging female artists across all CMT screens, including CMT and CMT Music, various digital series, and six tours anchored by superstar acts including Jennifer Nettles, Martina McBride, Sara Evans and Tanya Tucker. This year’s 2022 class marks a total of 95 female acts that have been named as part of the program, including notable alumni of the franchise who have achieved both commercial and critical acclaim: Ashley McBryde, Brandy Clark, Brittney Spencer, Carly Pearce, Gabby Barrett, Ingrid Andress, Kacey Musgraves, Kelsea Ballerini, Lainey Wilson, Lauren Alaina, Lindsay Ell, Maren Morris, Mickey Guyton and Tenille Arts, to name a few.

About CMT:
CMT is the leading authority on country music and lifestyle, offering a mix of original series, music events and specials. CMT is everywhere its fans are, including two cable channels (CMT and CMT, the 24-hour music channel), digital (CMT.com) and social (@CMT on Facebook, Instagram, Twitter, YouTube and TikTok). CMT is a unit of ViacomCBS Inc. (Nasdaq: VIACA, VIAC) (“ViacomCBS”). For more information, please visit cmtpress.com.

Amythyst Kiah: Amythyst Kiah’s debut album, Wary + Strange marks the glorious collision of two vastly different worlds: the iconoclastic alt-rock that first sparked her musical passion, and the roots/old-time-music scene where she’s found breakout success. Along with tapping into the vibrant musicality she honed in part through her studies in East Tennessee State University’s Bluegrass, Old Time, Country Music program, the Chattanooga-bred singer/songwriter expands on the uncompromising artistry she’s displayed as a member of Our Native Daughters – an all-women-of-color supergroup whose Kiah-penned standout “Black Myself” earned a GRAMMY nomination for Best American Roots Song and won Song of the Year at the Folk Alliance International Awards.

Callista Clark: At 18-years old, Callista Clark is the youngest member ever named to the CMT Next Women of Country franchise. Like so many young and talented singer/songwriters that paved the way before her, this Georgia native wields her creative gifts as both a defense and an instrument of peace as she puts her heart on display with her debut collection Real To Me. Her debut single, “It’s ‘Cause I Am” has entered the Top 20 as Country radio’s most successful new artist debut of 2021.

Camille Parker: California-born and North Carolina raised Camille Parker’s debut single “The Flame” has earned over 1.5 million on-demand streams and charted in the top 10 of Apple Music’s country charts in over 17 countries. Parker’s arresting vocal delivery, contemporary songwriting and genre-fluid approach to production has resulted in collaborations with some of Nashville’s brightest and most celebrated creators. Parker is currently recording her debut EP with GRAMMY award-winning and platinum-selling producers Chris McClenney and David Phelps. Most recently she supported Next Women of Country alumnae Brittney Spencer on her first headline American tour.

Jenna Paulette: Singer-songwriter Jenna Paulette is part of Nashville’s growing wave of female artists who are rewriting the rules and charting their own paths. The Lewisville, Texas native grew up moving cattle on her family’s ranch in Oklahoma, honing her voice singing in church and the great outdoors. Paulette earned a marketing degree at the Savannah College of Art and Design, and ultimately settled in Nashville, opening for such acts as Mason Ramsey, Parmalee, John Michael Montgomery and Clay Walker. Paulette’s success grew via TikTok, Pinterest and Instagram and she signed a publishing deal with Brad Paisley’s Sea Gayle Music last year.

Julia Cole: Julia Cole has amassed over 55 million streams and gone viral with over 13.5 million views of her song “SidePiece” on TikTok. The Houston-based Cole got her start performing the Star-Spangled Banner before her own volleyball games, and soon found herself performing for NFL, MLB, MLS, NASCAR, INDYCAR, and ESPN events before crowds of 75,000. She’s a sponsored ambassador for Mizuno Athletic Wear and has helped raise thousands of dollars for Tennessee’s Boys & Girls Clubs’ sports programs. Cole has opened for such acts as Dan + Shay, Dierks Bentley, Kane Brown, Jon Pardi, Carrie Underwood, Kenny Chesney, Michael Ray, and more.

Laci Kaye Booth: After reaching the Top 5 on the 17th season of American Idol, Laci Kaye Booth moved to Nashville, signed a record and publishing deal, and dove deeper into her songwriting and musicianship. The Texas native released her self-titled EP in 2021 on BMLG, co-writing all eight tracks. Produced by Dann Huff, they honed in on her authentic and honest sound. Her current single “Shuffle” is now making the rounds at country radio.

Lily Rose: Georgia native Lily Rose garnered viral and critical acclaim with her debut hit “Villain,” a runaway hit that recently received a RIAA Gold certification, a first for Rose. She released her latest project STRONGER THAN I AM last year and will tour with headliner Chris Lane in 2022.

Madeline Edwards: California born, Texas raised singer/songwriter Madeline Edwards has transcended musical boundaries, incorporating her jazz, soul, gospel and country influences into her unique sound. Currently working on her debut album, Edwards has already caught the attention of the industry, with notable performances and features including a performance on Lady Gaga’s Born This Way Tribute Record with supergroup, The Highwomen, and opening slots for Jordin Sparks and Grammy award winner Raphael Saadiq. Her latest single, “The Road” has garnered over 1 million streams. Edwards made her national television debut at the 2021 CMA Awards, where she sang alongside CMA nominee Mickey Guyton and Brittney Spencer.

Miko Marks: Making her way to Music City in 2003, Miko Marks received well-deserved accolades, yet her efforts to be fully embraced by the industry proved to be elusive. After a 13-year hiatus, Marks returns, eager to spread not only her music, but a message of unity and outspokenness for Black musicians in country music and beyond. Based in Oakland, Calif., Marks works towards an ever-evolving dream of creating art that is not stereotyped or pigeonholed by a specific genre and is created with no borders or boundaries. Her most recent album, Our Country, was released in March 2021, followed later in the year by her EP Race Records. She is currently writing new music.

Morgan Wade: A native of Floyd, Virginia, HITS said Morgan Wade is “Kris Kristofferson as a Gen Z woman.” With her unabashed debut Reckless, she landed on TIME, Rolling Stone, New York Times, Stereogum, FADER and Rolling Stone Country’s various Best Album and Songs of 2021. Produced by Jason Isbell + the 400 Unit guitarist Sadler Vaden and Paul Ebersold, the trio worked to create a song cycle that pulled the lean rock of Tom Petty through a modern take on country — and achieved a No. 1 SiriusXM Highway track with “Wilder Days.” As the acoustic guitar-driven “Days”  scales country radio, Reckless Deluxe expands the conversation. Having toured with Lucero last fall, she joins Luke Combs’ stadiums plays in 2022.