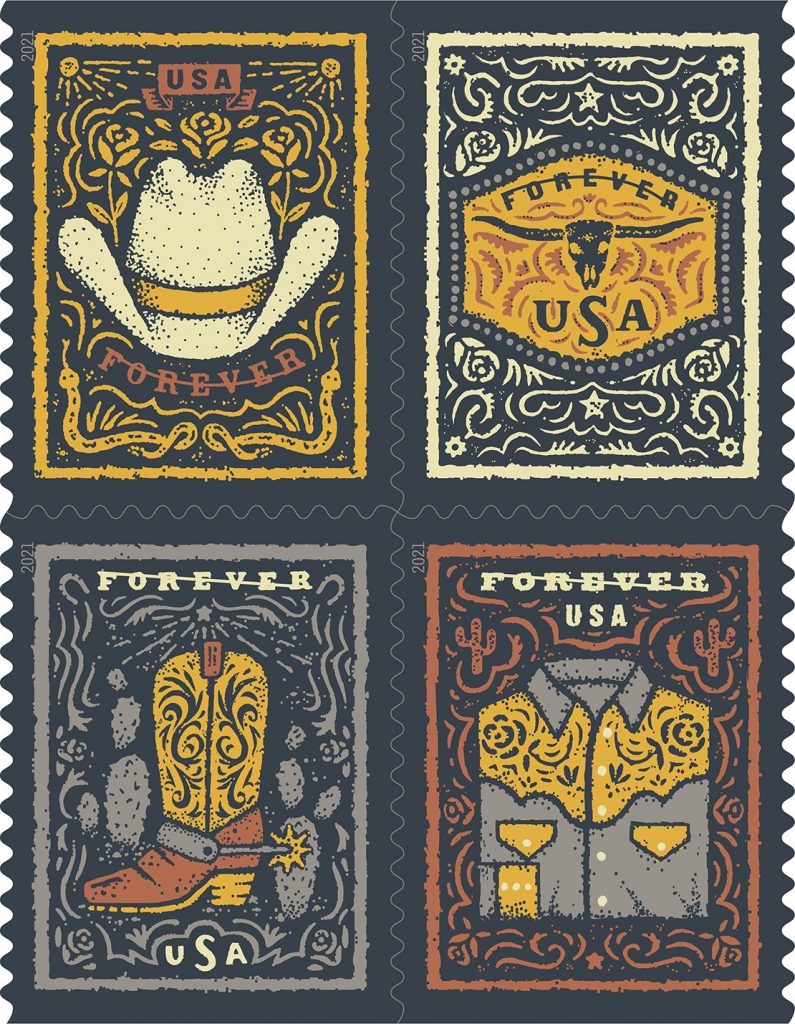 The stamps are available now at Post Office locations nationwide and online at usps.com/shopstamps. News of the Western Wear stamps is being shared with the hashtag #WesternWearStamps.

The history of Western wear in the United States began in the 16th century when the Spanish arrived in Mexico. They brought horses and cattle, eventually establishing ranches, which spread into what is now Texas, New Mexico and Arizona by the early 1700s, and later into California. Known as “vaqueros,” these cattle herders wore utilitarian garments that protected them from dangerous weather conditions and environmental hazards. From cowboy boots to broad-brimmed hats to shirts with double-fabric yokes, such articles became associated with the wardrobe of the American cowboy and cowgirl.

For more than a century, the mystique of the cowboy — popularized by Wild West shows and rodeos, novels, Western films, and country and western music singers — has influenced American fashion, evolving with the fads and styles of the time.

A cowboy hat is one of the most distinctive pieces of Western wear and an essential element of a rancher’s ensemble. Whether to block the sun’s rays, to keep the head dry and warm while riding horseback or simply to make a fashion statement, the cowboy hat is key to the Western wear look. The original wide-brimmed hats worn by American cowboys were made of beaver or other fur pelts and were highly durable. Today, hats are also made of felt, straw, wool, leather or synthetic materials.

The first cowboy boots were designed to protect the legs while riding horseback, with each foot fitting snugly into stirrups. They were constructed of cowhide with stitching on the upper shaft to increase durability and prevent the tops from slouching; pull straps helped get them on. The original toe was rounded but narrow enough for easily slipping into stirrups. Highly decorative boots — made popular by rodeo, stage and screen performers — featured colorful insets, cutouts and figurative motifs. Overall, the design has not changed much, although exotic skins are sometimes used today.

The look of Western shirts has varied widely, spanning from functional to ornamental and ultra-fashionable. The Western-style yoke — the extra panel of fabric sewn up and over the shoulder, connecting the front and back of the shirt for warmth and protection — is one of the most recognizable elements of Western shirts. Beginning in the 1930s, rodeo tailors designed highly elaborate custom shirts for their clientele, who were often film and music stars. They replaced sew-through buttons with round or diamond-shaped pearl snap fasteners, an innovation that became standard. Throughout the 20th century, the Western shirt was modified to reflect fashion trends more than any other element of Western wear.

A large belt buckle further embellishes a Western wear ensemble. When denim work pants with sewn-in belt loops became popular among cowboys, belts replaced suspenders. The flashy costumes of rodeo riders helped influence the rise of ornate belt buckles, with oversized custom buckles awarded to prize-winning rodeo contestants. Sometimes inlaid with gemstones and made of sterling silver and gold, and often decorated with hand-tooled filigrees, these works of art are as valuable as jewelry.

A stippling technique — creating images by using small dots of color — was used to give the illustrations a worn and gritty feel. Each image is framed by elements common to the American West and the iconography of the region, including cacti, snakes, roses and stars.

Western Wear stamps are being issued as Forever stamps, sold in booklets of 20. This Forever stamp will always be equal in value to the current First-Class Mail 1-ounce price.

A pictorial postmark of the designated first-day-of-issue city, Abilene, TX, is available at usps.com/shopstamps.

Customers may purchase stamps and other philatelic products through the Postal Store at usps.com/shopstamps, by calling 844-737-7826, by mail through USA Philatelic, or at Post Office locations nationwide.

The Postal Service generally receives no tax dollars for operating expenses and relies on the sale of postage, products and services to fund its operations.