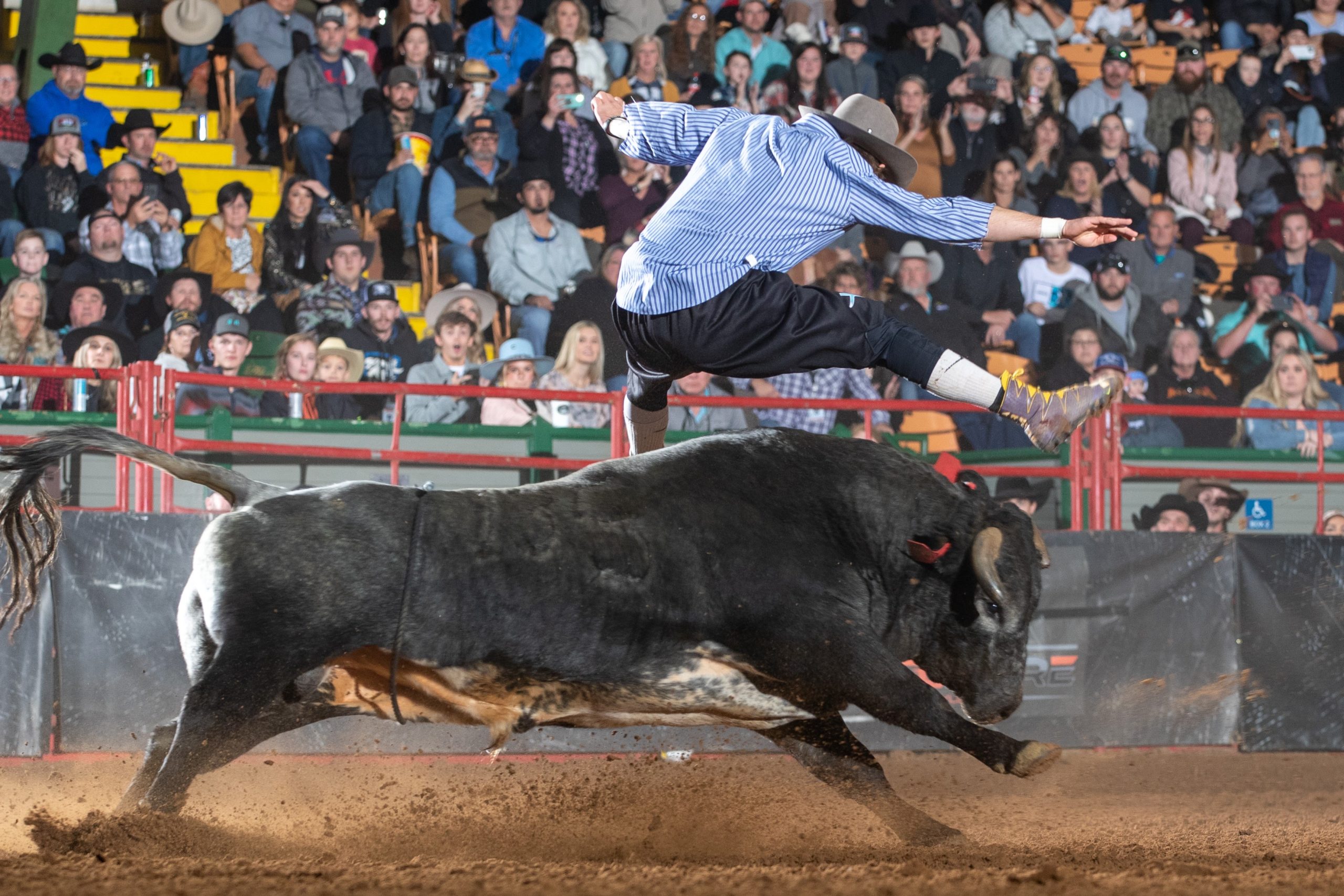 FORT WORTH, Tex. (November 21, 2022) – This December, Fort Worth, Texas, and the iconic Cowtown Coliseum will host yet another enthralling Western sports event. Today, in partnership with the PBR (Professional Bull Riders), the Ultimate Bullfighters (UBF) announced it will hold the seven-day, two-weekend 2022 UBF World Finals Dec. 1-10 at the venue, when the 2022 UBF World Champion will be crowned and $100,000 will be awarded to 24 of the world’s best freestyle bullfighters. The high-adrenaline action will take over Fort Worth on Dec. 1-4 and Dec. 8-10.

The UBF was launched in 2020 as a partnership between Luke Kaufman, 2020 UBF Stock Contractor of the Year Chad Ellison and two-time PBR World Champion J.B. Mauney (Statesville, North Carolina), showcasing the acrobatic western discipline of freestyle bullfighting. After awarding $237,000 in prize money in its inaugural season, the UBF will paid more than $350,000 in 2021 and will award more than $550,000 in 2022.

In freestyle bullfighting, a bullfighter competes for 60 seconds against a fighting bull predominantly of Spanish descent in an effort to score points for maneuvers performed during the one-minute competition. Unlike traditional bullfighting, the animals are not harmed. Bullfighters are judged solely on their ability to perform gravity-defying acrobatic stunts as close to the bull as possible without getting hit.

Throughout the seven days of action for the 2022 UBF World Finals, produced in partnership with the PBR (Professional Bull Rider) 24 of the world’s top freestyle bullfighters will compete through a tiered, progressive elimination format until the 2022 UBF World Champion is crowned on Saturday, Dec. 10, earning the accompanying $25,000 bonus.

The roster of bullfighters set to compete at the 2022 UBF World Finals is:

The high-adrenaline action will get underway with pool play on Thursday, Dec. 1 and Friday, Dec. 2. Bullfighters in Pool A will compete on Dec. 1, followed by Pool B on Dec. 2. On both nights, the pool of contenders will be split into four groups of three, with the top performing bullfighter in each trio advancing to the next stage of competition on Sunday, Dec. 4.

On Dec. 4, the eight advancing bullfighters from Pool A and B will be joined by the Top 4 performing runner-up finishers. The 12 competing bullfighters will again be split into four groups of three, with the top performing contender in each grouping earning an automatic berth to Championship Saturday on December 10.

On Saturday, December 3, the 2022 UBF World Finals will feature a special $10,000-added showcase. The special event will feature the Top 12 bullfighters from the regular season standings taking on 12 of the circuits top fighting bulls in a winner-take-all showdown.

In the shoot-out championship round, the four advancing bullfighters will each take to the dirt one final time with the top performer being crowned the 2022 UBF World Champion and collecting the accompanying $25,000 bonus.

Tickets for the 2022 UBF World Finals are on sale now and can be purchased at CowtownColiseum.com and PBR.com, or through PBR Customer Service by phone at 1-800-732-1727.

General Admission tickets start at $10, taxes and fees not included.

For a more close-up experience, fans can also purchase Silver Spur Seats for $35, VIP and Gold Buckle Seats for $45 and Dirt Seats for $55.

For more information about how to attend the 2022 UBF World Finals at Cowtown Coliseum in Fort Worth, Texas, Dec. 1-10, visit PBR.com.

Ultimate Bullfighters (UBF) is a league that promotes the sport of freestyle bullfighting. The UBF tour showcases the best talent in the game with over 100 active athletes on its roster that represent 25 different states and three different countries. Focusing on high-end content and action-packed productions, the UBF positions itself at the top of the western sports entertainment market and brings a fresh new look at action sports as a whole. With social media consumption at an all-time high, UBF is in a prime position for growth, exposure, and expansion.

PBR is the world’s premier bull riding organization. More than 500 bull riders compete in more than 200 events annually across the televised PBR Unleash The Beast tour (UTB), which features the top bull riders in the world; the PBR Pendleton Whisky Velocity Tour (PWVT); the PBR Touring Pro Division (TPD); and the PBR’s international circuits in Australia, Brazil, Canada and Mexico. In 2022, PBR launched the PBR Team Series—eight teams of the world’s best bull riders competing for a new championship—as well as the PBR Challenger Series with more than 60 annual events nationwide. The organization’s digital assets include PBR RidePass on Pluto TV, which is home to Western sports. PBR is a subsidiary of Endeavor, a global sports and entertainment company. For more information, visit PBR.com, or follow on Facebook at Facebook.com/PBR, Twitter at Twitter.com/PBR, and YouTube at YouTube.com/PBR.