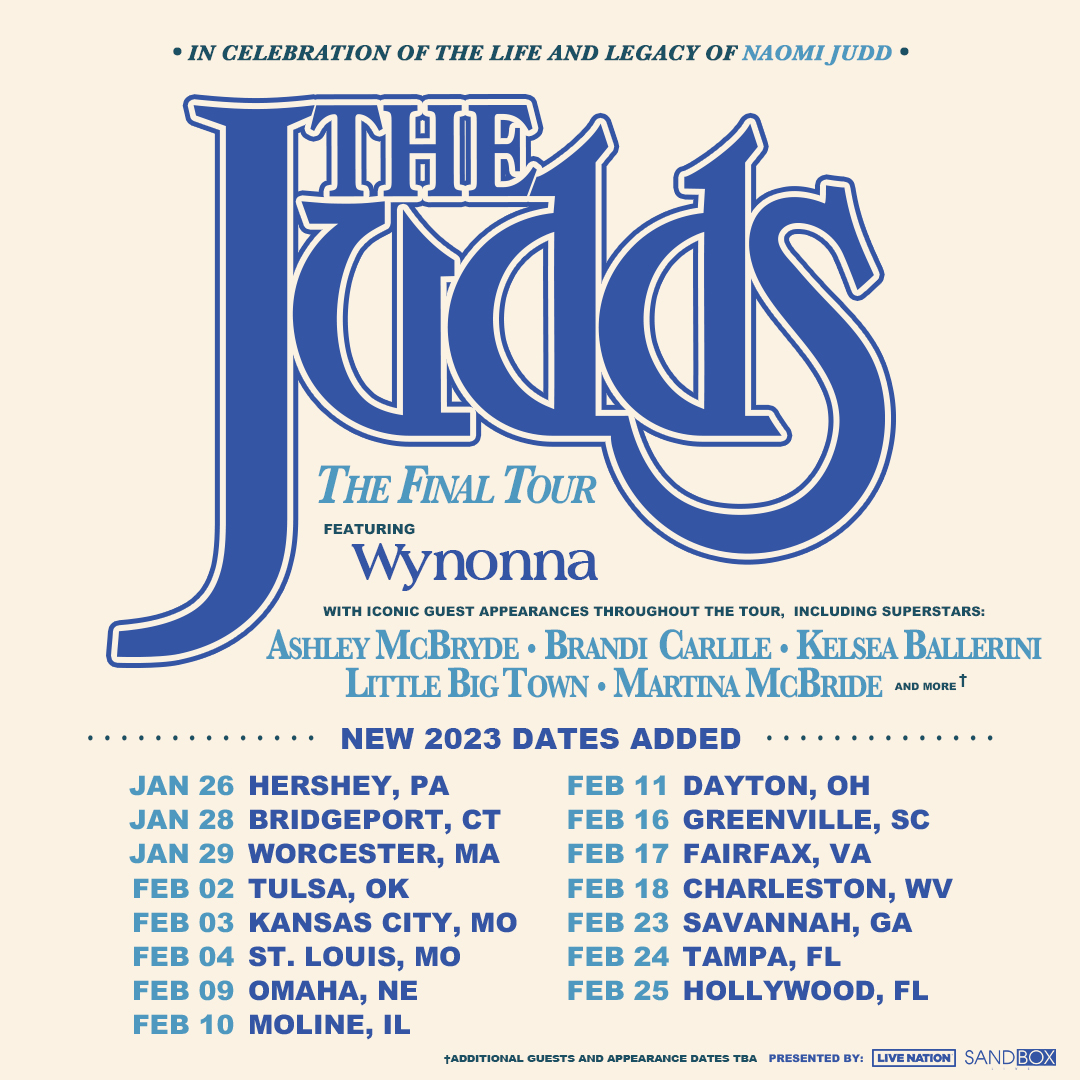 (October 24, 2022 – Nashville, TN) Country music icon, Wynonna Judd, appeared on the TODAY Show this morning with a special announcement – The Judds: The Final Tour will be continuing on in 2023 thanks to the overwhelming love and support of fans. The explosive first run of the tour saw generations of Judds fans singing along to the duo’s most enduring and beloved hits. Wynonna, along with the help of many of her musical friends, including Ashley McBryde, Brandi Carlile, Kelsea Ballerini, Little Big Town, Martina McBride – who will all be returning for the second run, packed out the initial 11 date arena tour with shows that encapsulated a lifetime of timeless music and heart. Fans can also expect more special guests to be announced in the coming weeks.

Citi is the official card of The Judds: The Final Tour. Citi cardmembers will have access to presale tickets beginning Monday, October 24th at 10 AM local time through the Citi Entertainment program. For complete presale details visit www.citientertainment.com. The Judds artist presale for fans begins at 12 PM local time. Tickets go on sale to the general public starting Friday, October 28th at 10 AM local time at TheJudds.com.

“I have never felt so overwhelmed by this much love and support!,”

“I have never felt so overwhelmed by this much love and support!,” says Wynonna. “The emotions that flow while listening to the different generations of fans sing back to me each night has been other-worldly.

I am so humbled by every artist that has come to sing with me on this tour. They’ve all managed to bring something so unique to The Judds music and I can say that no two shows are the same. It has been so life-giving!

The decision to add 15 more shows was a no-brainer for me. The fans have been such a gift during my time of grieving and honoring my mother in song. What an amazing season this is. I look so forward to continuing the celebration of the music that has changed my life forever.

In my 39 years of performing, these shows have truly been some of my absolute favorite experiences ever and I look forward to making new memories with the fans and guest artists in 2023.”

The Judds: The Final Tour Dates:

Wynonna and Naomi Judd brought a fresh acoustic sound to country music, with unmistakable harmonies surrounding Wynonna’s powerful lead vocals. The Judds are often celebrated for a rarely-interrupted stretch of 14 No. 1 hits when every single of theirs released by RCA landed in the Billboard Top 10; and a career that defined what it means to be individualists in the music business. The Judds dominated touring in the 80s with 20 Top 10 hits, have sold more than 20 million albums and blazed a trail for duos and women who have followed them. Together, The Judds have 16 Gold, Platinum, and multi-Platinum albums and longform videos, led by 2x Platinum albums Why Not Me and The Judds Greatest Hits. Their stripped-back style revived the popularity of acoustic sounds in country music and opened up the genre for more traditional approaches.