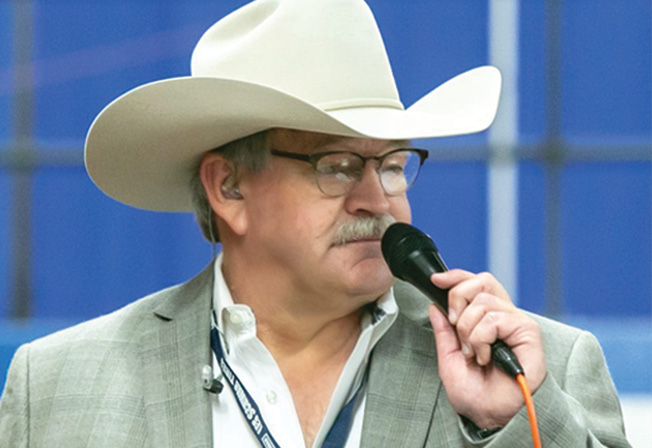 FORT WORTH, TX — October 28, 2022 – This week, the WPRA (Women’s Professional Rodeo Association) announced its 2022 committee and contract award winners, including Cowboy Channel Rookie Roundup being named Innovative Rodeo of the Year and Steve Kenyon receiving Announcer of the Year. Each winner will officially be recognized during the WPRA Star Celebration at the SouthPoint Hotel and Casino in Las Vegas during the NFR on December 1st.

In the official announcement press release on Tuesday, the WPRA said the following about Steve Kenyon: “Kenyon has used his voice to inform rodeo fans through live rodeo performances, radio, and now TV. Kenyon joins an elite group of announcers to have been honored with the WPRA Announcer of the Year award at least twice. Kenyon first won the award in 2010. He joins Bob Tallman (1998, 2020), Boyd Polhamus (2000, 2003, 2005), Hadley Barrett (2001, 2011), and Alan Moorhead (2008-09) as a repeat honoree in this category.”

Earlier this year in April, history was made at the Cowtown Coliseum in the Fort Worth Stockyards when the inaugural Cowboy Channel Rookie Roundup presented by Resistol took place with a $100,000 purse and brought together the top 15 contenders in the 2022 Resistol Rookie standings to compete. In addition to the payout, each contestant also received a gift bag of items from The Cowboy Channel and sponsors that could be used to help them get down the road during their rookie year.

“It is through Cowboy Channel’s incredible partnership with Resistol that served as the inspiration behind Rookie Roundup,” said Patrick Gottsch, Founder of The Cowboy Channel. “Together, we wanted to create an event that allowed us the opportunity to take a weekend and highlight the top PRCA rookies in each event by not only giving them the chance to win some money towards the Resistol Rookie of the Year race but also introduce them to our national television audience where the spotlight was on these cowboys and cowgirls for a few days. This first year was a tremendous success, and we look forward to working with Resistol to keep this going.”

ABOUT THE COWBOY CHANNEL

The Cowboy Channel is the official network of ProRodeo and the first 24-hour television network dedicated to western sports and the western lifestyle. Headquartered in the historic Fort Worth Stockyards, The Cowboy Channel also features a wide variety of “live” coverage from major western sporting events showcasing the world’s toughest and most talented cowboys and cowgirls. The network reaches 42 million homes on cable/satellite systems on Altice, Charter Spectrum, DISH, DIRECTV®, AT&T U-Verse, Cox, Comcast, Mediacom, Verizon FIOS TV, and many other rural cable systems. The Cowboy Channel can also be streamed online via The Cowboy Channel Plus at COWBOYCHANNELPLUS.COM, DIRECTV NOW, Roku, iOS, Android, Firestick, Apple TV, and Sling TV’s Heartland Extra package.