ProRodeo Hall Of Fame Announces The Class of 2022 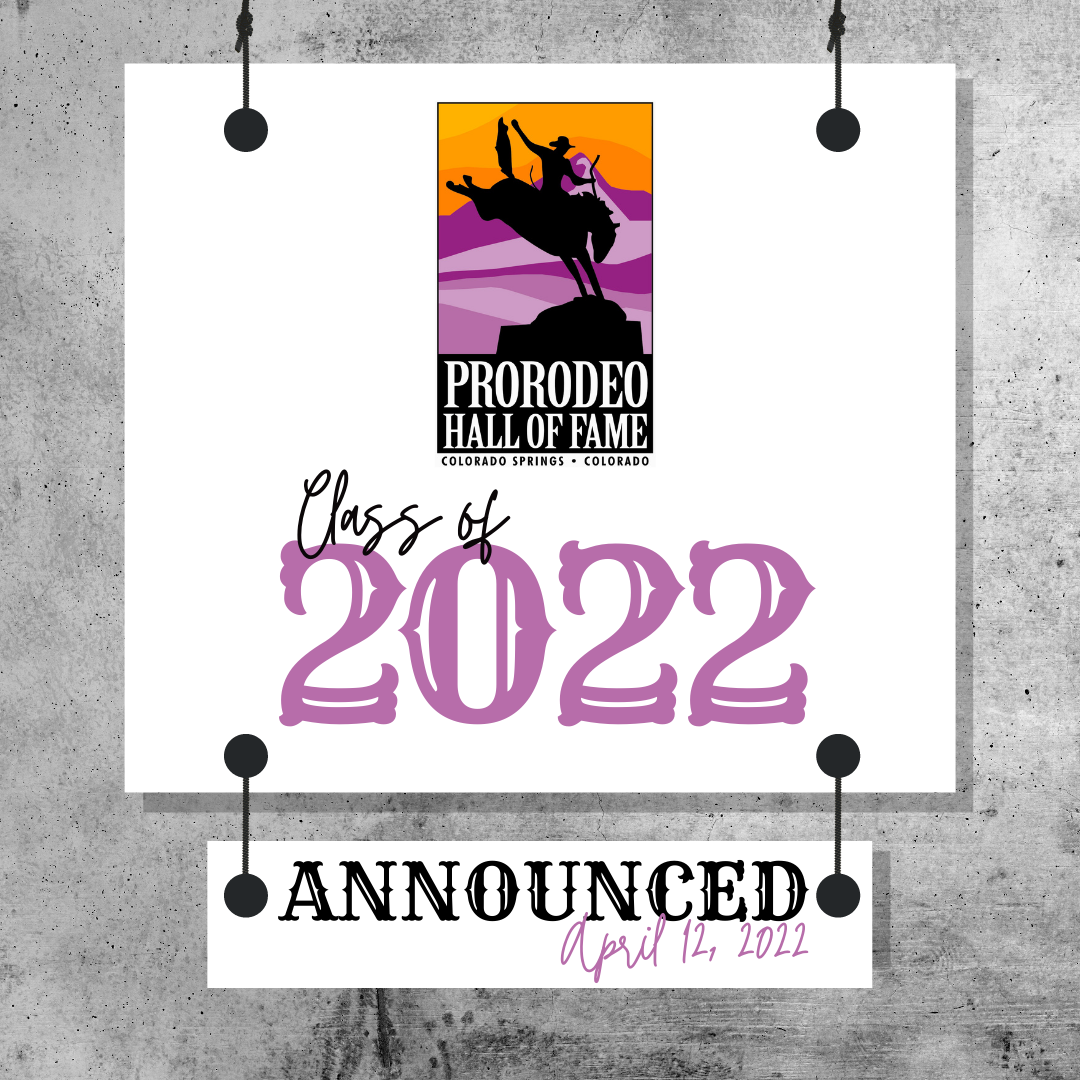 COLORADO SPRINGS, Colo. – Trevor Brazile, the King of PRCA cowboys with 26 world championships, heads up a star-studded 2022 induction class for the ProRodeo Hall of Fame.

They will be enshrined July 16 during ceremonies in the sculpture garden adjacent to the Hall, along with the rodeo committee from Nebraska’s Big Rodeo in Burwell.

“Well for a community the size of Burwell at just 1,200 people that puts on the quality of show we put on it’s not only huge for Burwell, but the area and the state of Nebraska,” said Jess Helgoth, President of Nebraska’s Biggest Rodeo. “My great-great grandpa was one of the original founders back in 1921. So, to be able to carry it on to be a 101 this year is just unbelievable awesome for a community no bigger than we are. It just absolute means the world to us.”

The 2022 Ken Stemler Pioneer Award, which recognizes those who have provided groundbreaking, innovative ideas and forward thinking that help the development, advancement, and success of the PRCA and/or the Hall of Fame and their missions is being awarded posthumously to John Van Cronkhite, the first general manager of the National Finals Rodeo in 1959.

Brazile also has won a PRCA record 74 career total round wins at the Wrangler National Finals Rodeo – in tie-down roping and team roping – and steer roping.
Brazile has won 36 rounds at the NFSR, second only to Guy Allen’s 48.

“It’s pretty hard to get me speechless, but this honor has done that. It’s one of those awards that goes past just your era,” Brazile said. “You’re enshrined with the greats from every era in a sports Hall of Fame. That is probably the coolest thing. We can talk about Toots Mansfield and Jim Shoulders all these guys, but now to be in the same hall as the likes of guys like that. That’s pretty cool.”

“Well, just to be recognized by your peers to be in the Hall of Fame is as farfetched as when I wrote down in my journal that I wanted to be a world champion,” Mote said. “When you’re doing it and in the middle of it you don’t pick your head up to look around and see how far you’ve come. To have as long as career and have some many obstacles thrown my way and still be able to overcome them was a group effort by a lot of people not just me.”

“When you start off as a kid you just dream about being a rodeo cowboy, that’s all I ever wanted to be. I was consumed with rodeo my whole life, but you know I never thought of the Hall of Fame,” Harris said. “I thought about being a world champion and stuff like that. If you make the Hall of Fame that’s a great honor because there’s a lot of people that deserve it. This road has road has been awful good to me. The people I’ve met and the honors you win are unbelievable. Then when you’re done you set back and look and think ‘well I’m glad it went the way it did.’

Lynn Beutler of Elk City, Okla., was an integral part of professional rodeo for 40 years, becoming one of the sport’s most widely known stock contractors in the family rodeo company known as Beutler Brothers. The company, started in 1929 with Lynn, Jake, and Elra Beutler, was recognized as one of the top stock contracting firms producing rodeos across the Southwest and Northwest.

“Jake is long overdue to be selected for the Hall of Fame because it’s always been the Buetler brothers,” Bennie said. “He meant as much to our operation as anyone. He was always behind the chutes and the guys loved him. That means a lot because he has been gone a long time but hopefully, he’s smiling up there in heaven after this because I know he’s up there.”

“I look at guys that are in the Hall of Fame and you know that’s a pretty great honor,”

Medicine Woman was the four-time PRCA Saddle Bronc Horse of the Year (2011, 2014-16) and the two-time saddle bronc horse of the National Finals Rodeo (2010 and 2015). She retired after competing at the 2020 Wrangler NFR at Globe Life Field in Arlington, Texas. She passed away this past December at the age of 19.

Only ProRodeo Hall of Famer Descent of Beutler Brothers and Cervi has won more saddle bronc horse of year honors than Medicine Woman. Descent won the honor six times from 1966-69, 1971-72.

“I look at guys that are in the Hall of Fame and you know that’s a pretty great honor,” said Frontier Rodeo’s Jerry Nelson. “I had never thought about having an animal selected. I always want to try to win stock of the year but to have one nominated and going into the Hall of Fame is pretty special. It’s amazing, I don’t know what to say. I’ve gotten calls from the PRCA office before and they said you can’t tell anybody, but you’ve won bucking horse of the year, but this call is even more special.”

“I’ve always thought it would be awful nice,” Duvall said. “Everybody thinks they have the best horse, but on mine I ran 60 steers on him one day in Houston, then the next day in Fort Worth I ran 58 on him. I think he’s the toughest horse I’ve ever seen in the rodeo business. I never thought an honor like this would happen, especially when I started out.”

As for Potter, back in 1951, at the age of 16, he began his journey in the Rodeo Cowboys Association, now known as the PRCA.

At his peak, back in 1959, Potter competed in the inaugural National Finals Rodeo in Dallas as a tie-down roper, finishing 14th in the final standings.
As recently as 2010, he qualified for the RAM Great Lakes Circuit Finals Rodeo as a team roper, and on July 17, 2013, Potter and partner Garrison Dixon won the Green County Fair ProRodeo in Monroe, Wis.

Combine Potter’s longevity as a competitor with his decade of success (1964-73) as a stock contractor with Rodeos Inc., and his time served on the PRCA Board of Directors and being selected the 2015 Legend of ProRodeo, and it adds up to him going into the ProRodeo Hall of Fame.

“That’s a heck of an honor, I’m not sure I deserve it,” Potter said. “I started out a long time ago when I went to that first National Finals Rodeo, but it didn’t make me a lot of money. So, I thought well I better find something else to do to make a living at, but I’ve always loved rodeo and I’ve done about everything you can do in the sport. It’s been a part of my life since I was nine years old and has been ever since. I never was my lively hood, but I certain spent a big part of my life involved in the sport of rodeo.”

ARDITH BRUCE
Ardith Bruce, who was born July 22, 1931, and currently resides in Fountain, Colorado, has been a member of the WPRA since 1960, reaching the pinnacle of the sport in 1964 when she won the world title aboard a horse known as Red, registered as Straws Kingwood Snip. The duo won $6,510 that year, edging Sissy Thurman by $400 to win the title. That same year, Red was the AQHA Reserve World Champion Barrel Horse and in 1965 was the first GRA/WPRA barrel horse to ever be featured in color on the cover of the Quarter Horse Journal.

“Oh wow,” said Bruce upon learning of her induction into the ProRodeo Hall of Fame. “This is a surprise to me, but I feel deserving of this recognition. I am honored to be joining an elite group of hard-working ladies that have received this honor before me.”

Bruce landed among the top 15 seven consecutive years from 1963 thru 1969. In 1967, she and Red won the Houston Livestock Show and Rodeo the first year it was held in the Astrodome.

Bruce was among the early GRA members to conduct barrel racing clinics and often traveled to Hawaii to conduct them. In addition to barrel racing, she spent a great deal of time on the racetrack and became the first female licensed outrider in the State of Colorado.

She also gave back and remained loyal to the association for decades even after retiring from full-time competition. When the Association’s headquarters was moved to Colorado Springs, Bruce was there to help get things up and running.

Her dedication and loyalty to the association carried over to the next generation with her granddaughter, Amber Bruce West, serving a term on the WPRA Board and now her great granddaughter is running barrels in college. Ardith was the one to put together a celebration party when Scamper was the first barrel horse to be inducted into the ProRodeo Hall of Fame and was once again on hand to see the first WPRA members inducted into the ProRodeo Hall of Fame in 2017.

CINDY ROSSER
Cindy Rosser, like Bruce, has been a staunch supporter of the WPRA for decades and has worked every facet of the rodeo business. Born December 7, 1954, to Cotton and Linda Rosser in Yuba City, California, she grew up horseback and rodeo has remained her life’s work. She joined the GRA/WPRA in 1969 and served 20-plus years on the Board of Directors. She was the California Circuit Barrel Racing Champion in 1982.

“You are kidding…wow, wow, wow,” said Rosser when she learned of her induction while working cattle on the family ranch. Rosser is only the second WPRA notable to earn induction into the ProRodeo Hall of Fame with Florence Youree being the first. “I am honored to be put in the same category as Florence, an early member of the GRA. That is quite an honor, and it is great that the ProRodeo Hall of Fame is recognizing the women of the WPRA.

“It is truly a great honor to be in there with some great people.”

Rosser has had a hand in rodeo production all her life and in 1986 was named the PRCA Secretary of the Year, in 1998 she was selected as the NFR Rodeo Secretary and in 2012 was the Ram National Circuit Finals Rodeo secretary. She has also carried the American flag in the opening ceremonies and has trained numerous horses to jump through paper, stand in a Liberty Bell, a birthday cake, a ring of fire, and more. She also produced and designed openings and sponsor flags at the NFR for 10 years.

In 1995, she was named the Coca-Cola WPRA Woman of the Year, in 2015 she received the Lenora Reimers Heritage Award through the WPRA and in 2019 was honored with the Tad Lucas Award from the National Cowboy Museum.

Rosser is also a member of American Bucking Bull, Inc. and has sat on their Board of Directors for more than 6 years. She currently resides in Marysville, California.

AUSTIN RICHARDSON CONQUERS REIGNING WORLD CHAMPION BULL WOOPAA FOR A MONSTROUS 94.5 POINTS TO WIN ROUND 1 OF THE PBR UNLEASH THE BEAST EVENT IN TULSA