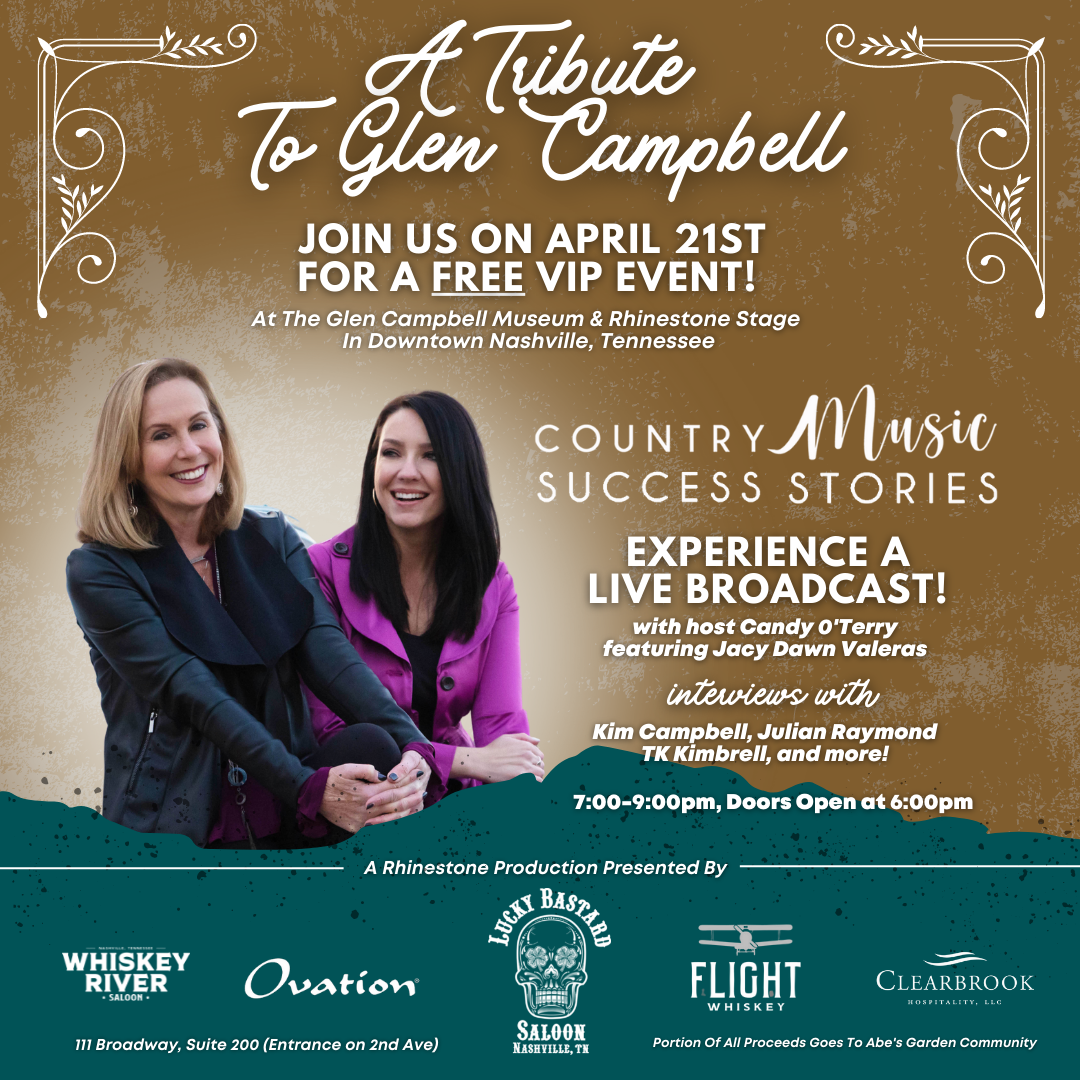 NASHVILLE, Tenn. (April 18, 2022) – Award-winning broadcaster and podcaster, Candy O’Terry and Music City Mentor, Jacy Dawn Valeras have announced a special live in person and open to the public episode of Country Music Success Stories. An intimate conversation and exclusive interview with Kim Campbell as well as Glen’s trusted friends and colleagues Julien Raymond, Mike Borchetta and TK Kimbrell reveal more about the man and his music on the Rhinestone Stage at 7 pm on April 21. The following evening, April 22, they will emcee a special event featuring hit songwriter and performing artist, Bobby Tomberlin and Ashley Campbell and friends performing Glen’s hit songs. During the week the Glen Campbell Museum and Rhinestone Stage will offer free events to celebrate the life, music and legacy of Glen Campbell, everyone’s favorite Rhinestone Cowboy. Register for free admission and seats to the events sponsored by Ovation Guitars, Lucky Bastard Saloon, Flight Whiskey, Whiskey River Saloon and Clearbrook Hospitality at glencampbellmuseum.com/tribute using code Glen22. The museum will be free to tour on April 22

“We are thrilled to partner with the Glen Campbell Museum for this tribute to the life, music and iconic legacy of Glen Campbell. Our only regret is that we didn’t get the chance to interview him before his death, but we are confident that our interview with Kim Campbell and the musical celebration that listeners will experience something to cherish for years to come,” shared host of Country Music Success Stories, Candy O’Terry and co-host of Country Music Success Stories, Jacy Dawn Valeras.

“Glen was bigger than life. His global superstardom left us with such incredible music and experiences that a museum is only the first step in bringing all of what made him special to his many fans and fellow musicians around the world. We are honored to have created a museum and entertainment venue that truly honors his amazing voice, musicianship, his humanity and his gift of storytelling,”

“I am thrilled that Glen’s musical legacy are preserved and celebrated in such a beautiful and enduring way. The museum inspires countless musicians and music lovers while continuing to entertain his lifelong fans and share his amazing gifts with generations to come. It’s with a big heart and sincere gratitude that we share Glen’s memories and cherished personal possessions with his fans and the world,”

The popular podcast has formed a distribution partnership with UK-based CountryLine.TV, the world’s first (and only) fan club app for Country music fans and was recently signed to MuddHouse Media, A Diverse Podcast Network and added to its portfolio of Originals. Country Music Success Stories, hosted by Candy O’Terry and featuring Jacy Dawn Valeras, is the 2021 winner of two awards of distinction from the Communicator Awards for best host and best music-based podcast.  The popular podcast made its debut on the top #25 on Apple Podcasts USA Music Interviews Chart and has been picked up by iHeartMedia, the #1 commercial podcast publisher globally and RADIO.COM which is powered by Entercom, the 2nd largest radio group in the country and the top podcast producer which includes 800+ streaming stations across the US.

In this Nashville-based podcast, radio legend and master interviewer Candy O’Terry goes straight to the pros to hear their stories.  From singers to producers, songwriters to record label executives, radio programmers and DJs, to PR and marketing pros, every episode is a deep dive into what it takes to succeed in the country music industry.  If you want to make it in Nashville, you need a roadmap.  Music City Mentor and Founder of Platinum Circle Media, Jacy Dawn Valeras provides valuable advice about everything from writer’s rounds to online marketing and building a network that will go the distance.

Subscribe to the podcast here and listen on all podcast platforms here.

About Glen Campbell Museum:
The Glen Campbell Museum and Rhinestone Stage, Clearbrook Hospitality, LLC – a subsidiary of Clearbrook Holdings Cor shares an experience and a multitude of immersive, interactive displays showcasing different stages of Glen’s life and extraordinary career as a studio musician in The Wrecking Crew (Elvis Presley, Frank Sinatra, Dean Martin, The Beach Boys and others), the singer of many hit records (“Gentle On My Mind,” “By The Time I Get To Phoenix,” “Wichita Lineman,” “Galveston,” “Rhinestone Cowboy” and “Southern Nights”) and as a star of television and film (The Glen Campbell Goodtime Hour, True Grit, I’ll Be Me). Located at the corner of Broadway and 2nd Avenue, The Glen Campbell Museum features more than four thousand square feet of never-before-seen artifacts from his early years on the farm in Arkansas through his climb to super-stardom, including many of Glen’s legendary guitars and instruments, his extensive collection of golf paraphernalia, and intimate family photos as well as stage worn clothing and much more. In the evenings, the museum transforms into The Rhinestone Stage – a live music venue. The Rhinestone Stage is “The Gem of Lower Broadway” where national and local touring acts host intimate performances in an entirely unique environment.

About Glen Campbell:
Legendary singer and guitarist Glen Campbell brought country music to the mainstream as the genre’s first crossover star with hits like “Rhinestone Cowboy,” “Wichita Lineman” and “Southern Nights.” In a legendary career that spanned more than six decades and more than 50 million records sold, Campbell, a six-time GRAMMY winner, created an indelible mark on American pop culture as a beloved musician, singer, movie star and television personality. From his time as a groundbreaking guitarist for Elvis Presley, Frank Sinatra, The Beach Boys and many others in the archetypical backing band The Wrecking Crew to his decades atop the charts to the grace he showed as he closed his career while fighting Alzheimer’s disease, there are few artists who have touched as many lives as the Rhinestone Cowboy. Campbell capped off his extraordinary career with Adiós, a studio album released in 2017 shortly before his death.

About Clearbrook Hospitality:
Clearbrook Hospitality, LLC is a subsidiary of Clearbrook Holdings Corp., a diversified management and private investment company. Led by President Ric Olsen, the Clearbrook Hospitality group consists of multiple, and growing, Nashville based initiatives including the Glen Campbell Museum and Rhinestone Stage, group sales, live music, consumer experience events, and transportation services. About Candy O’Terry:Known as Candy O for 25 years on Magic 106.7/WMJX, Candy O’Terry is an award-winning content creator who has spent her career providing a platform for women to share their stories. As the Founder of My Dove Productions and the Candy O Radio Network, Candy’s lens is focused on women doing great things with their lives. She is the host of The Story Behind Her Success weekly podcast and radio series, The Speaker Coach podcast, 16 Life Lessons Motivation Monday feature, and Candy’s Land, a 4-part music video series for young children during the pandemic. Her latest venture is the Nashville-based podcast series Country Music Success Stories featuring Music City Mentor, Jacy Valeras. Chosen by her peers as the 2015 Massachusetts Broadcaster of the Year, Candy is the winner of 65 local and national awards for excellence in women’s programming. To date, she has interviewed over 700 women from every walk of life with the mantra: when we lift each other up, we all rise. A lifelong singer, Candy’s full-length CD Dream Come True includes songs heard around the world. Born in New York City and raised in Connecticut, she is also the Co-Founder of Boston Women in Media & Entertainment. The consummate performer, Candy O has never met a microphone she didn’t love! About Jacy Dawn Valeras: Music City Mentor and Platinum Circle Media Founder, Jacy Dawn Valeras, got her start as a country singer. Born and raised in a little town outside of Boston, Jacy was writing songs and singing at local events at only 13. By the time she was 19, Jacy was opening for country music legends like Reba and Willie and performing at iconic venues like Madison Square Garden, the Bluebird Café and the Texas Troubadour Theatre. When vocal issues caused her to press pause on her singing career, Jacy knew she had to turn the page and start a new chapter. In 2012, she combined her talent and experience as a performer with her love of social media marketing, graphic design and content creation to launch Platinum Circle Media. Grammy, CMA, ACM, JUNO Award winners and Country Music Hall of Fame members have become Jacy’s clients and friends. Widely known as the woman in new media who returns calls, meets deadlines, and believes in the power of relationships to get the job done, Jacy checks all the boxes. When it comes to content creation, digital marketing, and increasing online visibility, Jacy Dawn Valeras is in a league of her own. As the creator and host of the Music City Mentor YouTube series, Jacy shares her wisdom with aspiring artists. Her inspiring platform, devoted to mentorship and making it in Nashville, has 250 thousand views and counting.

“A Music Memorial For Jeff Carson” Announced for May 10 At The Nashville Palace Celebrating His Life And Career.