Sitting Pretty On Top of the World is available at all digital retailers or by clicking HERE.

Lauren partners with Opry Entertainment and her friend Blake Shelton’s Ole Red in downtown Nashville for a Sitting Pretty On Top of the World album release Livestream celebration on Tuesday, September 7 at 8:30 PM Central. The show is free and open to the public. Lauren will introduce and perform songs from the new album. In addition to the live audience, the livestream event will be available to fans all over the world through both Lauren’s Facebook (@LaurenAlaina) and Ole Red’s Facebook (@OleRedNashville).

The Georgia native was a featured guest this week on Entertainment Tonight to talk about her journey to this third album, her upcoming book and starring role in the Hallmark movie, “Roadhouse Romance.” The multi-award winner will have upcoming features and interviews in Billboard, FORBES, PEOPLE, Atlanta Journal Constitution, Southern Living, CMT Hot 20, CIRCLE TV’s Southern Weekend (Oct 14), Holler Country, Music Row and more.

Features have run in EverythingNash.com, Country Now, RIFF Magazine, Sounds Like Nashville, Taste of Country, The Boot, Outsider.com and more.

Alongside award-winning songwriters Liz Rose, Lori McKenna, Hillary Lindsey, Emily Weisband, David Garcia, Ben Johnson, and more, Lauren co-wrote 14 of the 15 songs on Sitting Pretty On Top of the World, including her current single “Getting Over Him,” featuring Jon Pardi, which is climbing the country charts.

Sitting Pretty On Top of the World Track Listing:

In addition to her new release, the ‘Fall of Lauren Alaina’ includes the Georgia native also starring in a Hallmark Channel movie “Roadhouse Romance” premiering on September 11. On November 23, her inspirational book, Getting Good At Being You will be released. The book is available for presale now wherever books are sold. 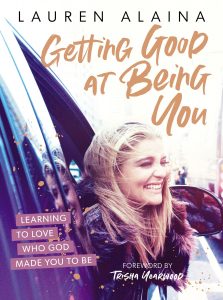