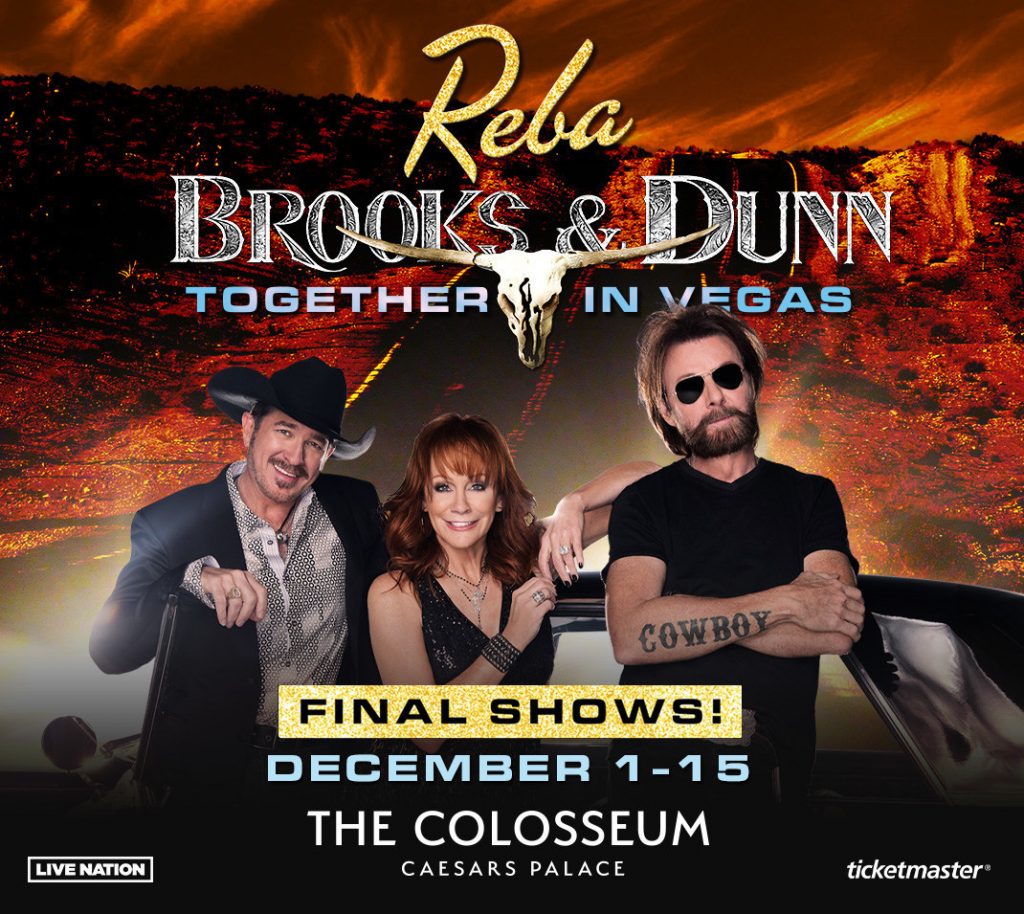 The longest-running country residency in Las Vegas, “REBA, BROOKS & DUNN: Together in Vegas” is a culmination of the friendship and musical admiration the trio has shared since first touring together in 1993 and features more than 30 action-packed hits backed by a band of 10 players from both of their touring crews.

The final nine performances going on sale are:

Tickets for “REBA, BROOKS & DUNN: Together in Vegas” go on sale to the public starting Friday, Aug. 6 at 10 a.m. PT. Tickets may be purchased at ticketmaster.com/RebaBrooksDunn or in-person at The Colosseum at Caesars Palace box office. All shows are scheduled to begin at 7:30 p.m.

ABOUT REBA MCENTIREMulti-media entertainment mogul Reba McEntire has become a household name through a successful career that spans across music, television, film, theater and retail. The Country Music Hall of Fame and Hollywood Bowl member has won 16 ACM Awards, 15 American Music Awards, 9 People’s Choice Awards, 6 CMA Awards, 3 GRAMMY® Awards, a GMA Dove Award and was a 2018 Kennedy Center Honors recipient, in addition to multiple philanthropic and leadership honors. Reba has celebrated unprecedented success including 35 career No.1 singles and selling over 56 million albums worldwide. Reba recently earned her 60th Top 10 on the Billboard Country Airplay chart, extending her record for the most Top 10 hits among female artists. Reba’s Top 10 success spans across five straight decades and lands her alongside only George Jones, Willie Nelson and Dolly Parton in the achievement. The Oklahoma native and Golden Globe® nominated actress has 11 movie credits to her name, a lead role on Broadway in Irving Berlin’s Annie Get Your Gun and starred in the six-season television sitcom Reba. Her brand partnerships include Dillard’s, REBA by Justin™ and she was named the first female and musician to portray KFC’s iconic founder Colonel Harland Sanders in their celebrity colonel campaign. Last year, Reba launched her very first Spotify original podcast, Living & Learning with Reba McEntire, with guests including Dolly Parton, Leslie Jordan, Kristin Chenoweth and more as they explore a variety of topics including aging, cancel culture, dating and more. Reba recently released “Somehow You Do,” written by Diane Warren, and featured in the motion picture “Four Days” starring Glenn Close and Mila Kunis.

ABOUT BROOKS & DUNNWith 40 Top 10 songs, and 20 plus No. One hits stretching back to 1991, two GRAMMY awards, dozens of ACM and CMA honors and a discography counting more album sales than any duo in history – regardless of genre – New York Times heralded that Brooks & Dunn “helped drive the power-country era of the early-to-mid 1990s and continued to benefit from the sea change in the genre they helped initiate right through their most recent albums.” Their original “Merle Haggard meets The Rolling Stones” vibe made them progressive stars in their own right. The duo’s critically-acclaimed collaboration project REBOOT debuted at No. One on Billboard’s Top Country Albums in 2019. The impressive feat marks the first time the duo has topped the album charts since 2009 while simultaneously earning the duo their 10th Billboard 200 Top 10 album, the most of any country duo or group in the chart’s history. The duo was nominated for a GRAMMY for “Best Country Duo/ Group Performance” for their collaboration with Luke Combs on “Brand New Man” on the album. The duo was also inducted into the Country Music Hall of Fame in the “Modern Era Artist” category in 2019. Brooks & Dunn are currently gearing up for their first nationwide tour in ten years featuring special guests Travis Tritt and Elvie Shane. The REBOOT 2021 TOUR kicks off in Indianapolis, IN on 9/2. For more information, visit www.brooks-dunn.com.